Guacamelee! is the latest game from DrinkBox Studios, the creators of the Tales From Space series, which centered around blob platforming. The second game in that series in particular is easily one of the best games available for the fledgling PlayStation Vita and cemented the developers on my list of development teams to keep an eye on. Guacamelee! continues the team's love of platforming and wall jumping in particular but adds in a grappling-heavy combat system and a unique setting. Can it compete on the much more mature platform of the PlayStation 3's PSN? 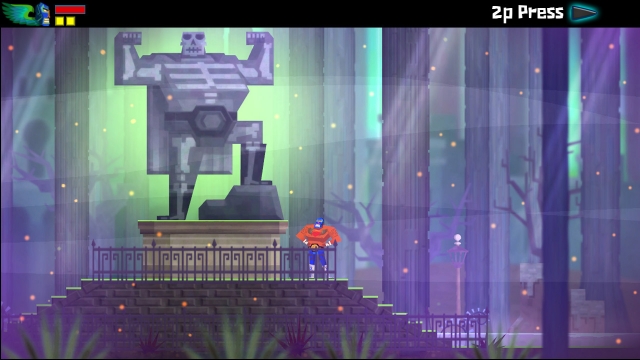 Even though I've been playing video games for about two decades now I can't recall many (if any) games specifically set in Mexico where you play as a native character. It's always nice to play a game and experience something you haven't before even if it's just a novel setting. You play as Juan, a strong and silent agave farmer who has feelings for El Presidente's Daughter, and is easily dispatched by the main antagonist while he kidnaps Juan's potential girlfriend (gaming 101 right there). Juan ends up in the land of the dead but is allowed to return with new powers after donning the mask of a luchador. Parts of the narrative make it seem like a pretty standard storyline with a new coat of paint, but the characters help to keep it interesting. Two of the bosses you'll face in particular are pretty hilarious as well as the goat wizard who teaches you new moves along the way. The ending is unique and interesting as well, and doesn't follow the path what one would usually expect to from this type of story.

As well as a unique setting the game boasts some exceptional graphical presentation. There is some slowdown during autosaves but the moment-to-moment visuals have a smoothness to them that I really enjoyed. Video Game and general nerd-related culture references on wrestling billboards are a treat with Super Mario Brothers, Batman vs. Bane, and Castle Crashers all making an appearance. These billboards are a perfect example of how to do these things correctly because they are always presented in a way that fits with the general feel of Juan's world and never feel tacked on. When playing on the Vita, some of these details are a bit harder to spot simply because of the smaller screen, so if you have a choice I would suggest playing on the PlayStation 3. Thankfully, you'll get both for your purchase, and the ability to save between the two is greatly appreciated.

The music is interesting as well, with obvious influences from classic Mexican tunes. The songs shift from bright and upbeat in the land of the living to sombre and somewhat creepy in the land of the dead. There are no voice-overs, but getting enough believable Mexican accents for the entire cast would probably be quite the chore for a smaller company like DrinkBox. 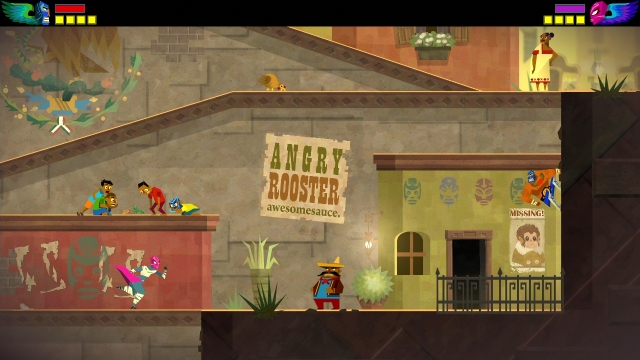 Juan's transformation into a wrestler of yore gives him quite a few new abilities. While Guacamelee! has been lauded by some as a fantastic example of the classic Metroidvania style of gameplay, that's actually not the most important part of the gameplay in my mind. Unlocking new abilities which you can use to reach previously unreachable areas is great, but what really pulls the game together is the battle system. Being a luchador, Juan's combat moves aren't just about punches and kicks; he's also great at grappling and throws. After a certain number of melee hits enemies become weakened and you can grab and throw them in whatever direction you like. You're invincible while throwing and you do damage to any enemy you throw others into so it's a great way to catch a breather from a fight and stun some of your opponents.

Having been briefly dead comes with some benefits. Most notably, Juan gains the ability to move between the lands of the living and the dead. This functions similarly to the mechanic in Outland and helps to make some of platforming sections more challenging (although sometimes this can come off as more trial and error than skill based), but where it really shines is with the battle system. Enemies that are in the other world can hurt you, but you can't hurt them and many fights involve different varieties of opponents in both worlds. Special moves you learn also play into the battle system, as enemies soon come with shields that have to be broken using a specific special move based on the color of the barrier. When you start encountering fights with all of these mechanics combined the challenge and the fun really ramps up and you feel like an accomplished, ghostly luchador with every victory. 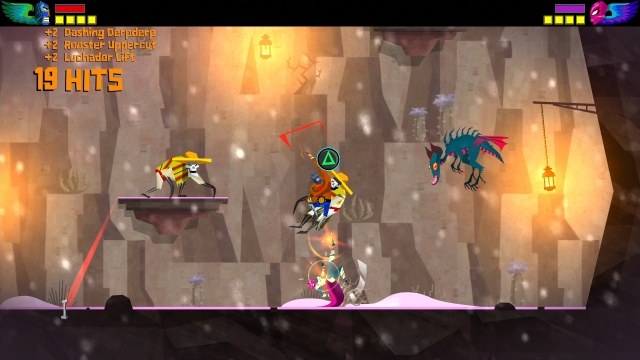 For $15 Guacamelee! gives you about five hours worth of campaign content, with more to explore at your leisure and a harder difficulty for those of you who feel up to the challenge. You can even play cooperatively on the PlayStation 3. It's not the most value-packed game on the market, but it's certainly nothing to besmirch either. So if you find yourself a little down during these slow months for gaming, stop in at the PlayStation Store and support one of the best Vita developers around; I think you'll be glad you did.

This review is based on a digital copy of Guacamelee! for the PlayStation 3.