After I played Cross Edge for the PlayStation 3 and ended up hating it you would think I'd have to be an idiot to give another cross-franchise SRPG a shot. Who would be that stupid? Well, here we are. While Project X Zone for the Nintendo 3DS has an amazing lineup of characters in comparison to Cross Edge, it still suffers from a lot of the same issues. It's certainly better than Cross Edge (real low bar there) but it's not quite the saving grace of the cross-franchise SRPG that I thought it might be.

Usually this is where I talk about the storyline, but I think I might blow a blood vessel in my head if I try to think of this one hard enough to explain it. Basically, characters from different games published by Namco Bandai, Capcom, and Sega have all been tossed together by unknown portals and they're faced with various adversaries from their respective worlds. It was nice to see some characters from games I loved (Resonance of Fate), or probably would have loved if I was given the chance (Valkyria Chronicles 3), but forcing all of these characters together means you can't have a coherent story.

Cross-franchise games work in the fighting genre because by and large nobody cares about the story in a fighting game (with some notable exceptions). What drives those games forward is the gameplay. By contrast, RPGs usually get repetitive after a while (it comes with having a 30+ hour playthrough), so unless you happen to have a super interesting battle system you need to have a compelling narrative to keep the player going. Unfortunately, although Project X Zone has a few laughs throughout it wasn't generally a riot like some RPGs, and the serious portions of the story are such a mishmash of characters, back stories and settings that it's hard to bring yourself to care.

So since the setting and narrative is a write-off it's up to the battle system to hold a player's interest, and sadly that only works for a while. Characters fight in pairs (mostly from the same franchises), but there are sometimes interesting match-ups of similar characters from totally different franchises. Holding a direction on the analog nub or D-pad and pressing the A button will perform a combined attack with the two characters. These attacks are always flashy and seeing the attacks for each character pair is one of the best parts of the presentation in Project X Zone. Unfortunately each character only has five of these and you'll repeat them ad nauseam so they lose their appeal quickly.

Additional characters and their attacks can be used with the L and R buttons. L will bring in a solo character to do an attack while R brings in another pair of characters for a support attack. The solo character has to be assigned to the pair to be usable while the support pair just has to be within one of the eight tiles adjacent to the original pair. If you can get three or more characters to hit an enemy at the same time then the target will go into a cross stage where they are stuck at a certain height and you can greatly increase the XP you get from each attack. This XP can then be used to power special moves that either do exceptional damage to a single foe or less damage to multiple ones.

If you time your standard attacks perfectly you can do critical damage but this can't be done at the same time as a cross attack and XP is necessary for defense as well as offense so it's usually better to focus on cross attacks over criticals. Unfortunately, while it's clearly the most logical choice to focus on getting more XP, it's also incredibly dull. Once you figure out how to start the cross attack with every trio of characters you have you can just mash through all the other attacks without thought for timing. Start the support attack just as the solo attack finishes and you'll maximize the XP you can earn. Now just do this for every enemy you come across, and toss in special attacks as and when you're able to, and you have the Project X Zone battle system. It's flashy and cool looking, but good lord is it repetitive.

That's the theme for a lot of my criticisms of the game in general. It feels like everything about it is designed to be repetitive. There's little to no management in-between battles, each fight seems to have innumerable jobber enemies you have to kill, and then what unique bosses you do fight are used again and again. I've lost track of how many times I've killed some of these guys only for them to run away from the battle seemingly unscathed and come back a few chapters later. This is probably the final straw that made me quit after 31 hours of playing. There are only so many times I can fight the same boss after killing 60 of his friends. The real kicker is that later chapters are even lengthier, with enemies being added again and again in the middle of the fight. I quit on chapter 31 out of 40 but it would probably take 45-50 hours to complete the game at the pace I was going. So, assuming you like what you're reading about the gameplay and story then you'll certainly get a good amount of game for the price you pay.

The aforementioned flashy attacks are definitely the high point of the presentation but the rest isn't too bad either. Each character has a remixed version of some iconic music to go with their moving around the map. Major story sequences are voiced but only in Japanese (probably because of the massive number of different characters). The sprites on the battle map are notably low quality, but that's a relatively minor complaint.

I don't think Project X Zone is a bad game overall, but it's certainly not the great game I was hoping for. The repetitiveness of the battles and the nonsensical storyline saw to that. Maybe Shin Megami Tensei X Fire Emblem will finally redeem the sub genre, but I wouldn't really recommend Project X Zone unless you direly have to get it because of the characters involved.

This review is based on a Nintendo 3DS copy of Project X Zone. 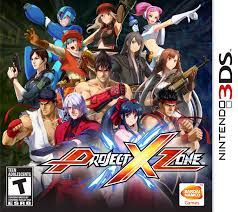