Few developers can beat Firaxis in terms of post-release support. Last year saw the release of Gods & Kings, Civilization V’s first major expansion, and this year the game’s second and final expansion, Brave New World has been released. Like Gods & Kings, this is no quick cash-in: it really does revamp even the core gameplay, as well as adding in nine new civilizations spanning the globe, from the Shoshone of North America to the Indonesian empire in the Far East. 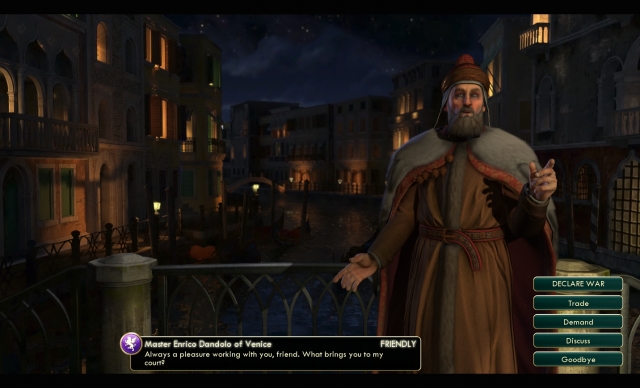 One of these civilizations – Venice – is especially worthy of mention. When playing as Venice, you can neither settle nor annex cities. Your only method of expansion is to send Great Merchants (called Merchants of Venice) to nearby city states and puppet them. You may purchase in these cities, but not choose construction. This lends Venice a unique playstyle, and is a very nice touch.

The most immediate of the gameplay changes is the addition of the trade route. These can be completed over land or sea with your own cities, city-states or other civilizations. They can provide much-needed food to new settlements, or generate gold per turn for both you and the other empire. You must be careful, however, to protect your valuable routes from rampaging barbarians and nefarious empires, and you have to pause for a moment and think about the consequences of declaring war, which will cancel both your trade routes with the empire in question and theirs with you, possibly eradicating your entire per-turn profit. It’s a boon for peaceful civs and a slap in the face for belligerent empires. Later in the game, these routes have the side effect of spreading your religion far and wide.

Next up is the World Congress, a precursor to the United Nations. When one civilization has discovered all others and researched Printing Press (in my experience, about 150 turns into the game, which is shorter than it sounds), that nation is designated as Host, and all civilizations in the world are invited to participate. Congress sessions are held more and more often as the game progresses, and the host and nation with the most delegates can make proposals on which all civs vote: from banning luxury resources (really rather pointless) to embargoing a civilization (often fatal) or staging a World Fair (highly beneficial if you put in the effort). You can bribe other civilizations to lend you votes, or ally with city states to gain delegates yourself. This adds yet another layer of co-operation between civs to the game, and it’s a very nice touch. 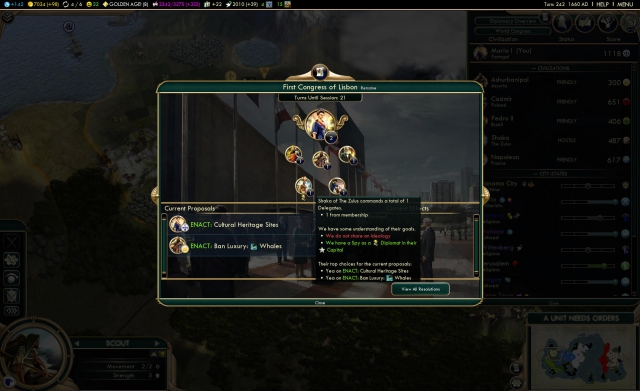 The third major change is the new Cultural Victory, of which I am not really a huge fan. You must generate a new resource named Tourism, generated mostly by Great Works created by Great Artists, Writers and Musicians. When your cumulative tourism has eclipsed the cumulative culture of a given civilization, you are said to be influential over them. When you are influential over every remaining civilization, you win a Cultural Victory. I tried for this with Poland, but ended up winning a Diplomatic Victory (which functions much the same as before) 30 turns before my projected Cultural Victory, mostly by accident. The trouble with Tourism and influence is that they don’t really do anything other than lead to Cultural Victory: Science gains you technologies; Diplomacy gains you city-state allies; Domination gains you cities; and the old Cultural Victory gained you social policies along the way. Influence has some minor effect upon other civs’ ideologies and religions, but it’s a little disappointing how little it has been tied together with the rest of the game. You can really just ignore tourism if you are trying to achieve another victory, but it does remain a pretty functional victory condition if you pursue it, and later upgrades allow your culture to contribute to your tourism.

Culture is still very important. You will be receiving more now than you did before the expansion, thanks to improved culture boosts from various buildings, and you will need it because of the fourth major addition: the ideology system. These really just turn out to be a new set of advanced social policies which advance in tree format – they exist in three levels, and you need two tenets from the first to unlock a tenet in the second, and so on. Some of the tenets are shared between the three ideologies - Freedom, Order, and Autocracy – but the majority are unique. The policies do seem a little bit arbitrary, however. It seems like they took the name of each ideology, made up some tenet names and then assigned the bonuses randomly. In general, Freedom is best for Cultural Victories; Order is best for Scientific Victories; Autocracy is best for Domination Victories. Your ideology will have some impact over how other civilizations view you, but it is by no means impossible to be on good terms with a civ of another ideology. 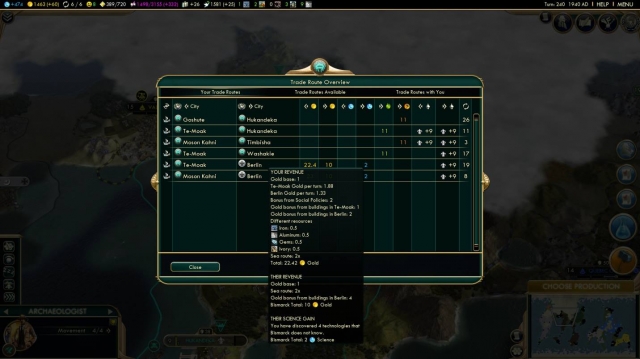 Mixed in with all of this is a range of new buildings, wonders and units to complement the new gameplay features and generally keep things fresh. There is also some new music, adding to the already excellent soundtrack of original compositions and classical greats.

In the end, Brave New World is much like Gods & Kings. It’s not revolutionary, and it doesn’t overhaul the core gameplay of Civilization V. It does, however, change enough to renew the interest of any fan who is tired of the same old game. Once again, it’s not going to make any naysayers suddenly love the game, but as fan service, it’s a valiant – and successful – effort.

This review is based on a complimentary launch copy of Civilization V: Brave New World on PC, provided by the publisher.