Those of us who purchased BioShock Infinite’s DLC Season Pass have been waiting anxiously for news of DLC for four months, but in an impressively short announcement-release gap, the first of three planned DLC packs, Clash in the Clouds, has finally been released. It forgoes the narrative and atmosphere of Infinite to present what is essentially a series of wave combat arenas. If you liked everything about Infinite except the combat, then stay far away, because this retains nothing of Infinite except the combat. However, if like me, you found Infinite’s combat appealing, then Clash in the Clouds should definitely be on your radar. 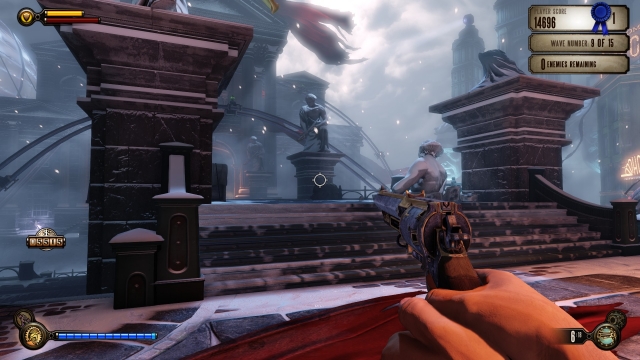 You begin with nothing. You are inside Columbia’s Museum of Archaeology with Elizabeth, without any indication of how you got in or why you are visiting, handed a couple of weapons and a handful of Vigors, and promptly directed to the first of the four arenas, Ops Arcade. Each of these arenas, based on a location in Columbia from the campaign but by no means identical, has you battle your way through fifteen waves of enemies, with breaks in between waves to switch your weapons and purchase upgrades, accompanied by a complete refilling of your health and salt meters. The maps do change subtly between waves: the tears change location and variety, airships can appear with enemies on them, and even the skyline is sometimes absent. In a way, it’s more like completing fifteen separate levels than a single level with fifteen waves. Should you die in-level, you have a choice: return to the Museum, score intact, or continue, resetting your score to zero and apparently excluding you from the leaderboard. I say “apparently” because I needed to use these continues to finish every single one of the four arenas, and yet I had highscores on all of them, which corresponded neither to my score at my first death nor my total score across all lives.

Before each wave, a tool-tip tells you which enemies you can expect to encounter, and shows you your blue ribbon objective, an optional target to secure a higher score and more cash. This can be a limit on which weapons you use, a requirement to use Vigor traps, a time limit, or something else entirely (such as Possessing a Handyman and using him to kill at least two enemies). I’m not really a fan of these on the whole. Early on in each level, they are trivialities that just make the game less enjoyable (if I wanted to take out a wave of enemies with only a shotgun, I wouldn’t be playing a BioShock game), and later they are downright impossible, because just completing the level by any means is extraordinarily difficult, certainly much harder than anything in the main campaign. One level involved defeating two handymen at once with no tears available; another had several gunship-mounted rocket turrets and a siren (an enemy with enormous amounts of health who can resurrect other soldiers). To make things a little bit easier, you can buy a single mid-level resurrection between waves, and if you use the Continue option after death, dead enemies remain dead, and your health, salts and ammo are refilled, which can make things slightly easier. The hardest waves, however, could well take you upwards of ten tries at first.

All of Infinite’s weapons and Vigors are present, and what seemed to me to be all of the upgrades and gear in the main game as well. After each wave, you are given either one piece of gear or one upgrade for your health, shield or salt meter. Money flows in very quickly, so you will probably be able to acquire far more Vigor and weapon upgrades than you did in the main campaign, as well as maxing out your health, Vigor and salt meters if you put enough time in. This, along with the enormous number of encounters, gives you a chance to experiment in a way you may not have had the opportunity to do in the campaign. Quite aside from the blue ribbon objectives (which, as I said, you’ll probably want to ignore for the most part) you receive cash bonuses for using Vigor combinations and employing a variety of methods to dispatch your enemies. You are, however, limited a little by the pressure to complete each wave: once you have entered a given wave, you cannot return to the safe area without completing it, no matter how many tries that takes. The two weapons you choose will be the two weapons you use throughout that wave, notwithstanding anything you may pick up in the level (and it’s not worth counting on those). Vigors fare better; I certainly made use of all eight in quite a significant capacity in my time with the DLC. 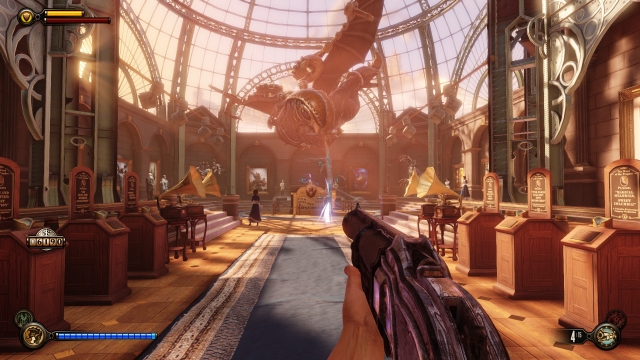 When you’ve run out of upgrades to buy, your money can be spent in the museum room itself, unlocking concept art, models, music, and even a secret room with some voxophones from a certain character in the main campaign. None of this content, other than the voxophones, is really unique to this DLC (it can probably all be found on the internet somewhere) but it still evokes a nice sense of completion to fill the museum with attractions, which even attracts a few tourists.

Some will be annoyed by the very concept of this DLC: Infinite’s narrative and atmosphere are its greatest strengths, and Clash in the Clouds has none of the former and, aside from a few nicely-designed museum rooms, none of the latter. But I personally feel that, for what you are paying (just $5 or £4), there is a lot of worthwhile content to be found here. Finishing each of the waves just once will take you a solid four hours. This will be enough to buy the upgrades you need and fill the museum, but competitive types may wish to keep going and try for a highscore, for the blue ribbons, or even for the elusive objective of actually completing an entire arena without dying. You can try out new weapons, use different Vigors, and employ different strategies in a way you really couldn’t in the linear, narrative-driven campaign. I would be disappointed if this were the game’s only DLC, but with two more story-driven DLC packs to come, Clash in the Clouds turns out to be a highly enjoyable and challenging few hours of experimenting with Infinite’s combat system, and that is by no means a bad thing.

This review is based on a digital download of BioShock Infinite: Clash in the Clouds for the PC.