There's just something about a good platforming game that sets them apart from anything else in the industry. I don’t know if it’s the straightforward goals (usually ‘get to the end’), the iconic characters, the secrets, or the sense of satisfaction one gets after overcoming a particularly diabolical series of obstacles. Regardless, platformers, like Donkey Kong Country or Mega Man, instill some type of magical feeling in me that most other genres just can’t. The only real problem I can think of with many games in this category?

No matter how exquisitely designed, challenging, or just plain fun they are, the levels in platforming games, from Mario to Super Meat Boy, are finite. Sure, you can go back and replay them, but eventually they tend to lose their sense of magic and challenge after you’ve memorized and played each course a dozen or so times. Even in the ‘endless’ LittleBigPlanet, I’ve spent longer looking for player-created levels that were created with care than I have actually playing. Wouldn’t it be great to be able to sidestep all that and have a platformer that never ran out of content?

In this game, you guide Bob, your world-weary platforming hero, through various levels and worlds in order to get to the princess and beat the bad guy. Pretty standard, right? The twist comes from the fact that every level in the game is randomly generated by the computer, so the experience will be fresh every time you play. Yes, you can save any level you like if you want to come back to it later, and yes, it has a Story Mode with a narrative that has a beginning, middle, and end, but even then the levels you see will be completely different from the ones I played through.

You can see just how in-depth the stage-creation algorithms are by going to the Free Play mode. Here, you can tweak dozens of variables and have the game instantly create the type of challenge you want. A brisk stroll through a sunny hillside? A jetpack-equipped Bob desperately trying to outrun a rampaging spiked wall in hell, beset by lasers, demon snakes, and disappearing platforms? Let’s just say that if you’ve ever wanted a platformer version of a Bullet Hell game, then look no further than Cloudberry Kingdom.

Perhaps the most value-packed portion of the game, though, is the Arcade mode. Here, you can select from several gametypes that make good use of the level generator in order to keep you on your toes. Escalation, for instance, is an endurance round where you start with a set amount of lives and need to make it through as many levels as possible. Getting 25 coins nets you an extra life. While the game starts out relatively easy, you’ll also want to stockpile coins for some of the nightmarish later levels, as you can use them to buy a brief clip of the computer beating that level, a line that will get you through the level if you follow it precisely, and even the ability to slow down time. Time Crisis is a variation on Escalation where you start with fifteen seconds on the clock, and each coin you collect adds one extra second, with the goal being to beat as many levels as possible before it gets to zero. Other modes play off this same idea, with shakeups such as having Bob change abilities between levels.

Those abilities change up the game significantly, too. Phase Bob constantly grows and shrinks, while others have him unable to move or stop jumping. Sometimes he’ll even be in a spaceship, changing the entire genre of the game. What’s pretty remarkable is how well the game tailors these levels to the version of the character you’ve selected. If you pick Jetpack Bob, you can be damn sure it won’t give you a challenge Classic Bob could have beaten.

If it wasn’t hectic enough trying to adapt to new levels every time you play, every mode has support for up to four players (local only). This requires a lot of coordination when you both need to hop on an enemy at the same time if you want to make it across a gap. That’s not to mention resisting the urge to keep moving when a partner falls behind — especially when a giant laser has you in its sights.

As engaging as the gameplay is, though, the visuals are merely adequate. Outside of the cutscenes in Story Mode, which depict characters and environments that are literally made of paper, the graphics are mostly nothing memorable. There’s certainly personality, like with the jerkish floating blocks who gleefully smile when you fall to your death. However, there isn’t much detail given to Bob or many of the obstacles he faces — at times, it feels like a high-resolution Flash game. I understand, though, that, like with the Scribblenauts games, there can potentially be hundreds of objects onscreen at once, and so each one needs to be low-detail in order to keep the game running smoothly. The sound fares better, with the ‘jumping’ and ‘getting a coin’ sounds being an obvious homage to Mario, and the music is a well-done bunch of techno mixes that fit well with the frenetic pace of the game.

With its endless supply of levels and permutations, does Cloudberry Kingdom render future purchases of platform games unnecessary? No. I’m sure, in time, that players will tire of the particular way Bob moves, or hunger for levels that, once mastered, take longer than about thirty seconds to beat. I also would have appreciated the ability to edit the specific placement of objects in order to really make the level your own, as well as an option to upload my creations for others to check out. That said, this game has extraordinary lasting value for this genre, especially for a $10 download. Platformers have enjoyed a resurgence in recent years thanks to a multitude of great games, yet Cloudberry Kingdom aims to outlast them all.

This review is based on an eShop download of Cloudberry Kingdom for the Wii U. 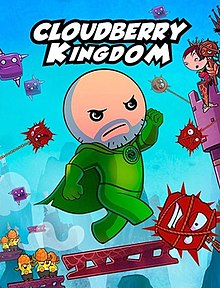