When it comes to the world of Shadowrun, having played the original Super Nintendo cult classic is like wearing a badge of honor and superiority. It was very much ahead of its time, as more whimsical JRPGs ruled the early to mid '90s console role-playing market. Shadowrun blew the doors open with a dark and gritty blend of sci-fi steampunk and fantasy, melding hacking and cybere-enhancements with Trolls, Elves, spells and spirits. Even though my childhood self couldn't quite grasp the intricacies of megacorporations, the Matric (very similar to that Matrix, but a good 10 years ahead of the movie), and the impoverished and drug-induced society that has all but destroyed any societal norm due to the events that saw a fantastical renaissance of magic, mythical beasts, and meta-humans, I was still enamored with the game's unique mixture of genres. So, chummers, I hope you're ready to once again explore Seattle's futuristic slums, for Shadowrun Returns is definitely a return to form after the basterdized "revival" of 2007, and get ready to wipe some fraggin' drek off your boots as your run through the shadows.

Welcome to the sprawling slum of Seattle, one of few remaining territories not under the crushing grip of one of the planet's megacorporations, where fantasy, cyberpunk, and realism intermingle in a sea of crime, drugs, magic, and cyberware. With technology advancing in a rather typical cyberpunk fashion, with the end of 2011 came the end of the Mayan calendar. Yet, instead of impending doom, the world saw the ushering in of the "Sixth World," where magic once again took root and many humans were instantly transformed or began being born as mythical beings. Now in the mid 2050's, society is still struggling with the re-introduction of magic. Metahumans fill out the lower end of the societal and class spectrum, Native Americans have become very powerful and control most of the US and Canada thanks to their immense connection with nature and the spirits, molding them into unparalleled Shamans, and doctors are little more than chop shops for body parts. Megacorps now run the world, fueled by technology and corruption, with all of their dirty work (or just work) being conducted in the shadows by Shadowrunners. Now, enter the player character.

Taking on the role of a robustly customizable character, the player will wake up in a beaten-up and tattered apartment, down on their luck, with no prospects of any cash inflow. That all changes with one simple vid-call from an old friend that you used to run with. While the news of his death may leave you disheartened, it means a monster payday - your friend Sam has a "kill switch" attached to his heart, meaning that when it stopped you received a pre-recorded call. But this call wasn't simply a goodbye, it comes bundled with 100,000 Nuyen, as long as you can ID Sam's killer and seek justice in his name. The game's plot for the main campaign - Dead Man's Switch - provides a great introduction to the Shadowrun world for newcomers and an equally gratifying experience if this isn't your experience of the series. Keeping to the traditions that spawned Shadowrun as a tabletop game, it forgoes flashy cutscenes and voice acting for descriptive writing that provides detailed backstories and explorations of character emotions, as well as creating a rich and superb depiction of a near-future Seattle that's under the thumb of megacorps.

The story is seemingly fueled by dialogue choices, and while you'll have many options of how to talk to NPCs in order to flesh out more of the story, which is admittedly rather interesting, the major plot points are not affected by your actions and the story will play out the same no matter what you choose to do, save for a few minor instances. The lack of voicework and cutscenes has no impact on Shadowrun Returns - in fact, the classic use of written descriptions serves in creating a more unique and worthwhile experience, and one that is truer to the pen and paper source material. Though a tad on the short side (the campaign can be completed in about 10 or 12 hours), it never fails to impress around each twist and turn as it delves deeper into the shadowy rabbit hole, exploring the implications of megacorporations, the magical revolution, the drug trade, shadowrunning and everything in between.

Character customization sees a decent array of options, allowing players to first pick their race of five choices (Human, Dwarf, Elf, Troll or Ork) that specialize in a couple of different stats while lacking in others that fit their stereotypical personalities. Elves, for instance, have high charisma and speed, though low strength and health, and Trolls (surprise) have very high strength and body/health, but are pretty much dumb as rocks when it comes to conversing with Seattle's populace. Players can also alter their character's appearance, with a modest amount of different styles ranging from hair style and color to face shape and look to choose from. Classes can also be selected to give a boost to certain abilities, where shamans and mages will begin as much more adept with magic than other classes. However, what separates Shadowrun Returns from many modern class-based RPGs is that you're not pigeonholed into one class for the length of the game. Any ability for any character may be chosen and enhanced, and rather than setting class limitations on abilities, they're instead determined by race. Elves and Dwarves can max our their magic, hacking, or speaking abilities, yet are limited when it comes to health or strength, while Trolls and Orks can become heavy-hitting powerhouses, but can't become very proficient in hacking or magic. Character creation feels more like a traditional pen and paper RPG, which fits perfectly given Returns' source material.

While you can certainly opt to stay within the confines of a selected class, doing so makes for an unnecessarily challenging game. New abilities and upgrades are gained through the use of Karma, which is gained when quests are completed and other criteria are met, and replaces the traditional EXP gain. In order to gain or upgrade abilities, the level of ability desired requires the same amount of Karma. So, if you want to upgrade your charisma to level 6 for example, you'll need to have 6 Karma, and then 7 for the next step. Focusing on one single ability will cost a bunch of Karma early on. By being a jack-of-all-trades, it's possible to become a proficient hacker-shaman-gunner-decker-mage, which is much more fun, not to mention infinitely more useful than sticking to one class. Charisma is also extremely important. Leveling charisma unlocks new etiquettes, such as shadowrunner, corporate, or street, which will create more dialogue options that may grant some extra Nuyen or further back-story. Without spreading the love around to different abilities, you'll miss out on some of the more entertaining parts of the game, as using drones, hacking into the Matrix, summoning, and spellcasting are the more interesting and worthwhile options.

Gameplay breaks down into a series of turn-based, tactical quests and conversing with a decent sized cast of unique characters to investigate Sam's murder and the plot that underlies it. Combat is an updated version of the original Shadowrun, with a more streamlined interface, areas that provide different tiers of cover, more varied abilities and attacks, and a sizeable crew of runners to hire. Allies will occasionally appear during missions, accompany you on quests, or can be hired for free, but the majority of your team will need to be hired, making managing Nuyen vital. Movement and ability are allowed through the use of AP, with each character beginning at 2 and increasing as the story unfolds. Weapon and melee attacks, decking and rigging abilities (hacking and drones), and shaman and mage spells also require AP, with more advanced abilities also having a cooldown. Each action will also have a chance to hit based on the level of the attack or ability and the opponent's defensive state. It's a standard affair for the tactical genre, and if you've had the chance to play X-COM: Enemy Unknown then you'll have a good grasp on what combat is all about. One of the most alluring aspects of combat comes with the mix of abilities that are available to the player, as deploying drones as a Rigger and summoning elementals as a Shaman helps keep combat from becoming dull, and hacking into the Matrix, while basically the same as real world combat, does provide some variety.

The Matrix features the same general rules as the rest of the game, with some utilization of cover and use of abilities being the key to survival. Deckers are the most adept in the virtual space, and the Matrix can only be accessed by those with adequate skill. Hacking into the Matrix is occasionally required throughout the game (and if it is, you'll be given a free runner), and most of the time will effect the real world playing field. Deckers, like Summoners out of the Matrix, can call on different programs to do their bidding. Summoning elementals, calling on programs, and deploying drones is a ton of fun, and it helps tremendously if you've spent Karma in all three skills and are short on Nuyen to hire a proper team of runners.

While running through each quest is a blast, the game's simplistic look and linear progression takes its toll on the game experience. The overall feel of the cyberpunk and fantasy setting is captured well, as the two concepts are blended rather seamlessly, but it's not terribly impressive visually. Though written descriptions serve to bolster the lackluster visuals, details of character models and the surrounding areas are not very distinct, and there aren't many visual options for high end PCs. It also doesn't help that exploration is relatively non-existent, save for the closed-in and often small quest areas that don't offer much to be looted in the first place and makes saving Nuyen that much more important. Nuyen is in very short supply, and even shorter if you don't level charisma and acquire different etiquettes in order to speak to specific people. Although the visuals are lacking, Shadowrun Returns' music is top notch, blending electric beats, guitar riffs, and a bit of dubstep to create an atmosphere befitting the cyber-fantasy landscape.

Taking advantage of the PC's modability, Shadowrun Returns also features a full toolset, allowing for a tremendous amount of user-generated content, though it hasn't had enough time to thrive quite yet. There's bit of a learning curve, and if you've never used toolsets before, then you may have to hit up YouTube. With only the PC really capable of easily installing mods, Returns has an infinite amount of possibilities that's only limited by player creativity, as complete campaigns can be created with some effort. In time, the downfalls of the main campaign, particularly its length and linear nature, will be forgotten with (hopefully) wonderful user-made content, as well as official Hairbrained Schemes DLC, with the first set to be released this October.

This review is based on a digital copy of Shadowrun Returns for the PC. 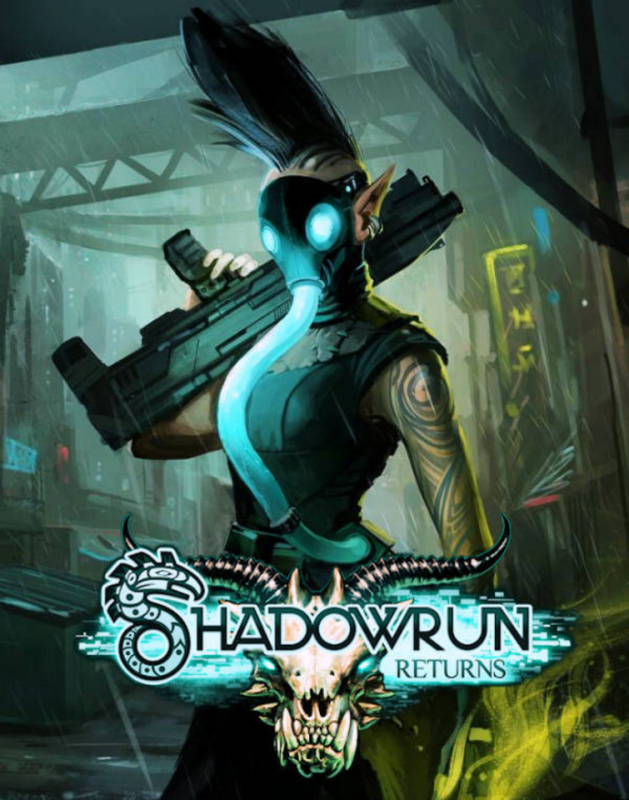