Though Rayman games have been around since the 90s, 2011’s Rayman Origins rebooted the series in such a way that it felt completely fresh and extraordinary. Also arriving in time to herald the PS Vita’s launch, the game was quickly regarded as one of the best games available in the handheld’s early days. Now the eagerly anticipated sequel, Rayman Legends, has made its way to the Vita in a release coinciding with the other major console versions. While the game is likely excellent no matter where you play it, the Vita version of Rayman Legends stands out for its portability, reduced cost, and, unfortunately, some missing content.

The premise is roughly the same as Origins. Although 100 years have passed since the events of that game, not much has changed for Rayman and company. In fact we find out that our heroes have spent most of that time sleeping lazily. In the meantime, dark teensy forces once again invade the Glade of Dreams. Whereas Origins had you save a bunch of imprisoned Nymphs, this time you will save warrior princesses that go from mere damsels in distress to playable heroes. Story weaknesses aside, the game does a good job catching your attention right away keeping things moving at an engaging pace.

You navigate the game world by hopping in and out of paintings a la Super Mario 64. This form of nonlinear progression streamlines the process of figuring out which levels you should replay and makes all the extra content you have unlocked easy to find.

Rayman Legends does not introduce new gameplay elements as gradually and elegantly as Origins did but compensates with level design that is uniformly excellent. The game maintains the same level of difficulty that will have you trying to master tricky jumps and avoid close calls with enemies repeatedly. One subtle improvement over Origins is that the Legends’ stages are no longer divvied up into small sections broken up by doors like those of its predecessor. This adjustment allows for more enjoyable and continuous play. You will still enter hidden doors to rescue teensies only found in special areas off the beaten path though.

New to the game are musical levels where you dash as fast as you can, collecting Lums and Teensies, while hopping and bopping to the specially remixed tunes like “Eye of the Tiger” and “Black Betty” that play in the background. These stages are just as difficult as the rest of the game, so you will break the flow of the music when you inevitably fail and must start over from a few seconds before. The main adventure also incorporates smartly paced stealth gameplay and multi-tiered boss fights that finish off each new world with a challenging surprise.

This time around Rayman manages to incorporate co-op multiplayer, a feature that was regrettably left out of the Vita release of Rayman Origins. Rayman Legends was originally revealed as a Wii U exclusive that took advantage of that system’s touchscreen controls for special co-op sections. Thanks to its 5-inch touchscreen the Vita is able to replicate the experience nearly as it was intended, the one drawback being that you need a friend with their own Vita and copy of the game to take advantage of the multiplayer offerings. You can play locally via ad-hoc or even connect through a wireless LAN connection. Still, the lack on online multiplayer is a disappointment, especially when a game like LittleBigPlanet proved online 2D platforming co-op can excel on the Vita. The game has Facebook integration, so you can obnoxiously show off your latest accomplishments to your friends, most/all of whom won’t care at all.

Rayman Legends excels all the same when playing solo. The Murfy levels seem to be the only thing holding it back in this regard. These stages can be tackled alone and are well designed in their own unique way but they also noticeably slow down the pace of the game. It can be frustrating not being in direct control of the character doing the platforming, especially when the CPU controlling him makes some questionable decisions. As Murfy you will use the touchscreen to remove obstacles, activate levers, distract enemies and provide safe platforms for your allies to jump on. Certain sections also task you with using the Vita’s tilt functionality to manipulate the world and turn the world on its head to reach your desired goals.

The spectacular art direction from Origins returns, though this time around the characters and some of the environments are spruced up with 3D models. It takes some time to get used to, but overall it's a nice compromise that keeps the look in line with its predecessor but at the same time differentiates it just enough to feel new. In motion the game looks stunning, especially since there is usually so much action going on in the background during gameplay. The worlds you visit are varied and well thought out. Stages inspired by ancient Greece, Medieval Europe, and under the sea keep things from becoming stale and familiar. Legends also features dozens of different characters to play, though many of them are just colorized variants of the same core cast.

Rayman Legends just so happens to feature one of the most enjoyable credits segments I have ever experienced in a game, but the full range of what the game has to offer is not even half over by the time these credits roll. Of course you can and should replay all the stages to acquire any teensies you may have missed, but there are also a number of extra modes included. Kung Foot (a soccer mini-game) is a multiplayer distraction that is fun in short bursts. There are also online challenges where you can test your skills against players from all over the world in daily and weekly contests. In addition to Lums and Teensies, Lucky Scratch Tickets are available as an extra incentive collectible. Scratching these tickets will earn you more Lums, Creatures for your gallery, and even retro stages adapted from Rayman Origins. The inclusion of Origins stages greatly extends the play time of the game and is great for gamers that never got around to experiencing the original. Often these levels feature embellishments that take advantage of new features not introduced until Legends and serve as a reminder of just how awesome this series is.

The Vita release is not without controversy though. Rayman Legends on Vita features 85 less Teensies to collect than its console counterparts. This omission translates into 28 missing levels in the game's Invasion modes. The developers have promised that the missing content will be patched in at no extra cost but as of the time of this writing that promise has yet to materialize. On the positive side, the Vita version does feature two exclusive characters to unlock: Prince of Persia Rayman and Splinter Cell Globox. There are also 5 Murfy Levels exclusive to the Vita version that take advantage of the system’s rear touchpad to interesting, if not remarkable, effect. If you are willing to wait for the missing content then Rayman Legends on Vita is a comparative steal at only $40.

Rayman Legends is a remarkable step up from its already excellent predecessor. On the Vita it ranks among the very best platformers and overall titles available on the system to date. Once the missing content gets patched in then it will arguably be the definitive version of Legends, but since that has yet to happen, I can only review the title based on what content it offers from day one. In that sense, the Vita version is inferior, but in this special case inferior is still pretty damn spectacular. 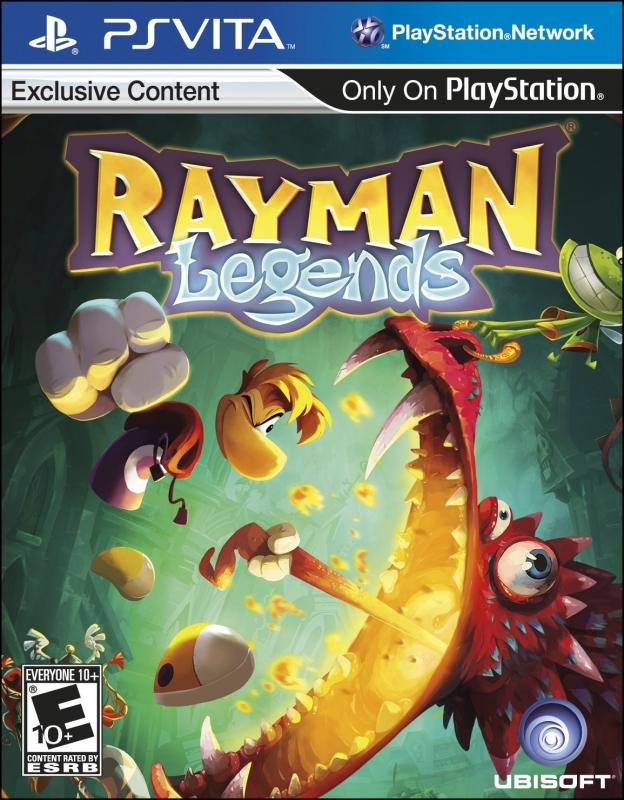