For many, 1998's Grim Fandango marked the end of an era. Released during the apex of the point-and-click adventure’s popularity, Grim Fandango is considered to be the pinnacle of the genre, and the masterpiece of writer/designer Tim Schafer. Alas, despite critical acclaim upon its original release, Grim Fandango bombed commercially, its failure widely credited to the wider demise of adventure gaming.

Now, nearly 18 years after its original release, Grim Fandango has returned, remastered for PS4, PS Vita, and PC, with revamped graphics, controls, and a special features commentary provided by Schafer and other members of the original development team. With nearly two decades passing since release, Grim Fandango holds up remarkably well; this remaster deftly covers up lingering blemishes and wrinkles that would otherwise betray its age. Grim Fandango is now not just simply a great late ‘90s adventure game, it’s an essential game for all eras.

Right off the bat, Grim Fandango’s setting establishes it as one of the most unique and evocative games ever created. Drawing heavily from Mexican folklore and culture - specifically the Mexican “Day of the Dead” - Grim Fandango takes place within the Land of the Dead, a type of purgatory where souls arrive after dying and begin their four year journeys to the 9th Underworld. You play as Manny Calavera, an undead travel agent who tries to offer better travel packages to the recently deceased, allowing them to make it to the 9th Underworld more quickly. Not long after the opening moments, however, Manny uncovers a conspiracy that has not only been robbing him of clients, but wronged an innocent women, and thus embarks on a quest to save her.

Manny’s odyssey across the underworld ends up being an epic one, constantly throwing him in unexpected scenarios and situations. Grim Fandango combines its Mexican folklore influences with classical Hollywood and film noir, with jazz clubs, casinos, cruise ships, and criminal undergrounds being some of the many settings in which Manny will find himself. The joy of discovery is integral to the game’s experience - immerse yourself in the world of Grim Fandango and you’ll likely find that the Land of the Dead is one of the most unique and memorable settings of any game.

Immersion is key, as running through the game solving its various puzzles will take quite a bit of time. Like many adventure games of the era, Grim Fandango’s puzzles range anywhere from satisfyingly head-scratching to frustratingly obtuse. For first time players more familiar with Telltale’s recent offerings such as The Wolf Among Us or The Walking Dead, a walkthrough will be all but required reading to beat the game. Even with a relatively recent playthrough in my memory, I still struggled with some of the game’s more famously fiendish puzzles, such as those involving a magic road sign or track-racing cats. *spooky skeleton voice* You have been waaaaaaaarned.

For many, Grim Fandango’s puzzle design is part of its charm, while for others it will prove aggravating. Speaking for myself, it’s easy enough to pull up a walkthrough on my phone or computer to get past the particularly difficult puzzles, just to get to the real meat of the package: the superbly written characters and story. By today’s standards, Grim Fandango’s expert characterization and voice-work blows most contemporaries out of the water. For a game released in 1998, this level of quality was absolutely astonishing. Coupled with its pre-rendered backgrounds and stylized 3D character models, Grim Fandango has aged incredibly well. If you told me Grim Fandango Remastered was a game originally from 2015, I would believe it.

Of course this is also due in part to the quality of the remaster, rerendering the original character models at higher resolutions, as well as providing new lighting, all while retaining the original pre-rendered backgrounds (although access to the original art assets means they look absolutely gorgeous in HD). All in all, what we have is an incredibly faithful adaptation of the original game, though purists are still given the option to toggle between the original and remastered graphics at the push of a button, much like 2011’s Halo: Combat Evolved Anniversary.

Drawing influences from classical Hollywood, film noir, and screwball comedies, Grim Fandango boasted one of the most memorable and instantly identifiable soundtracks in game history, and with Remastered’s newly recorded live symphony version it sounds even better. Also revamped are new control options - the original release had Resident Evil-style tank controls, with players only able to control Manny relative to the direction he was facing. This made solving the game’s difficult puzzles and navigating the game’s huge areas somewhat cumbersome, so thankfully Remastered has included more standard camera-relative controls, making game much more enjoyable and immersive (and much like the original visuals, the original tank controls are provided as an option for purists).

"Remastered" is an apt term to apply to Grim Fandango, as it is indeed a retouching of a masterpiece. Whether you're a returning fan, or entering the Land of the Dead for the first time, Grim Fandango is an absolute must play for fans of interactive storytelling. 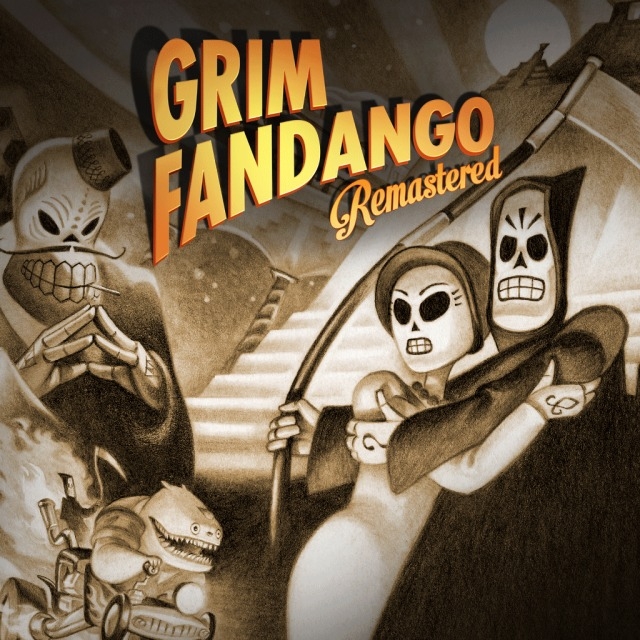