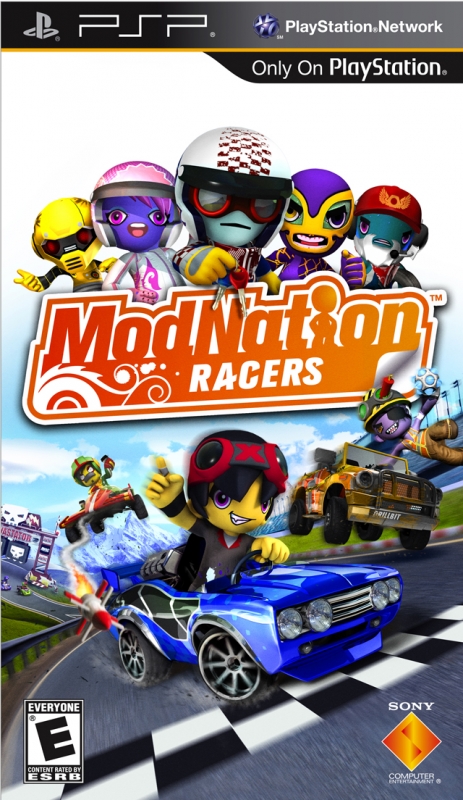 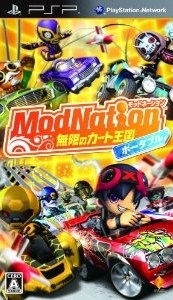 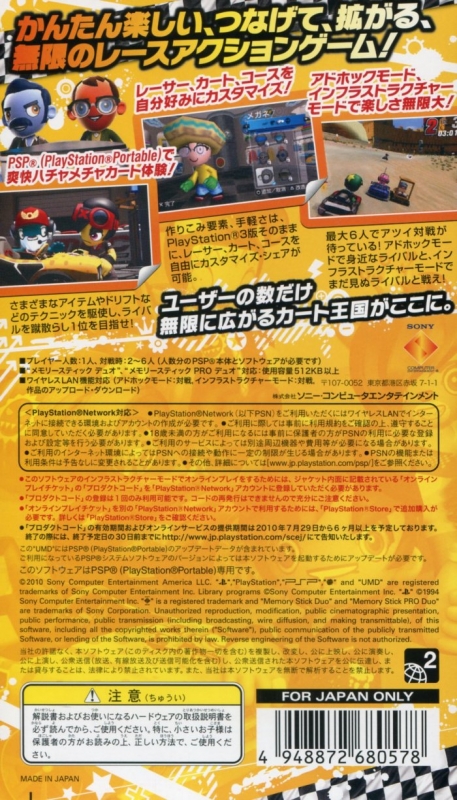 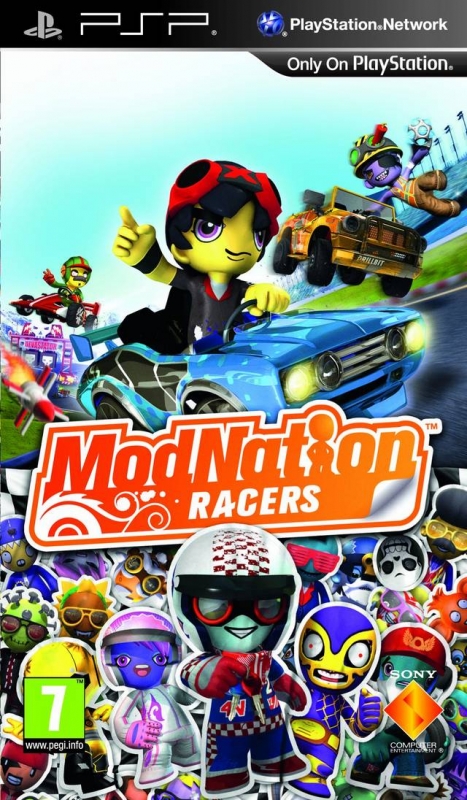 An interesting trend is starting to develop of PS3 titles seeing releases on the PSP. We saw it last year with the PSP edition of LittleBigPlanet and in the same vain Modnation Racers has made its way to the portable. That game, despite the absence of the vital multiplayer mode, made a strong transition to the PSP, even winning our PSP Game of the Year award. Modnation Racers comes with its multiplayer portion fully in tact and, on paper, accomplishes everything it sets out to do within the capabilities of the system it's on. In spite of this, the game is rough around the edges in many of the places it counts.

As far as kart racers go, the gameplay includes everything you expect - bountiful weaponry, outlandish courses, and chaotic competition. Once you're behind the wheel all of the mechanics eventually fall into place as they should, but they can take a while to understand. The controls have adapted nicely to the PSP; R accelerates, L brakes/reverses, the analog nub steers, Square utilizes your weapon pickups, Triangle boosts, Circle activates your shield, and X is used to hop, double hop, and drift. Additional configurations are available as well. The key to winning races is tactical use of all your abilities in order to accumulate points that fill up a meter that controls your boost, shield reserves, and more. Points are earned in a variety of ways; you will be rewarded for destroying opponents, catching big air, drafting, or even successfully sideswiping one of your many hostile opponents. Speaking of opponents, the number of racers maxes out at six, down two from the console edition. That doesn't mean the competition is any less fierce, in fact the game reaches frustrating levels of difficulty often. No matter the setting, rubber-banding AI is present to make your life miserable and constantly on edge until you have crossed the finish line. Unless you put an unbelievable amount of distance between you and the pack, the other racers somehow always find a way to pull ahead or blast you to smithereens with powerful weapons and amazing accuracy. Frequently, mad dashes to the finish in first place are swiftly stolen away. This becomes even more irritating during the game’s career mode, where you have to finish in a certain place to advance.

The career mode follows Tag, a young racer rising the ranks of the Modnation Racing Circuit with a rapidly growing fan base. It comes complete with a fully scripted story packed with humor. For a game built with customization in mind, the story features some surprisingly memorable characters, including a comically demeaning mentor, shady agents, and clever commentators. The story is not award winning by any means but does serve its purpose well while it lasts.

The Modnation Racing Championship, or MRC, is comprised of five different tours each with their own unique courses to race on. Coming in first place is not necessary to advance. More important is fulfilling the unique objectives of each race. These range from taking out a certain number of competitors, to achieving certain positions or performing particular stunts. Completing the career mode will take at least 5 hours to pass with the bare minimum of effort, but much longer for those seeking to accomplish each objective in every race. Pure Race, Action Race, and Last Kart Standing are the three varieties of race modes available when not playing through the career. All are available in both single and multiplayer. Pure Races do away with all the power ups, forcing racers to rely on skill to win. Action Races are more akin to the kart racing that gamers are accustomed to, where getting the right weapon can make the difference between victory and defeat. Last Kart Standing is exclusive to the PSP version of Modnation Racers and plays exactly how it sounds; race as the clock counts down, successively eliminating the racer in last place. Each mode allows you to customize certain aspects of the experience and play on your choice of pre-made, downloaded, or tracks of your own creation.

There are 27 pre-made tracks in total to race on, all made with the same level editor that players are encourage to toy around with. In theory, and even as you race through them, the tracks appear well thought out, with enough jumps, shortcuts and hazards to keep things interesting. There are multiple routes to take in each course, including shortcuts that can backfire if your timing is not on point. However, they lack the personality found in other kart racers, although MNR doesn't have an established license to draw inspiration from, making it somewhat forgivable. What is not forgivable though, is how rough around the edges the courses can be. There are several snags your kart is likely to hit on any given raceway that just don't seem to be present in other games in the genre. Hazards sometimes impede your progress more than necessary and self-destructing in order to return properly orientated in the race is not as smooth as it could be.

The creation aspect applies to mods, karts and courses. Mods are the simplest to infuse with your own persona, or any other you can imagine. Other than the same basic physical shape, you are free to customize the appearance of these urban inspired avatars any way you want. Yes, you can make popular characters like Mario, The Joker, Master Chief, Mr. T, etc., with enough ingenuity, but odds are you will be beaten to the punch by other creators if you're hoping to share them online. Karts are created in the same vain. You can modify the body, parts, decals, and accessories. You can design anything from a serious racing machine, to the Batmobile, or silly automotives from imagination.

The meat and potatoes of the create aspect is of course the track editor. You begin by selecting from one of four themes: alpine, desert, jungle, and seaside. The second task is to set the starting gate and from there map out the course as if you were sketching it with your kart. You only have a certain amount of track to set at your disposal and it is subject to some limitations. You can alter the elevation of your track by holding X to raise it or Square to lower it. Some kinks can be worked out by editing the foundations you have set and revising afterwards. Everything from track deformation to building mountains or towns along the tracks perimeter, and even placing props, has a particular tool that works well within the context of what the PSP can do. Created tracks are subject to the same coarseness found with the pre-made tracks. Tracks take a long time to create just as you envisioned and it will take a considerable amount of time to master all the ins and outs of the construction process; that is if you don't give up out of frustration before that happens. Overall, the creation tools are impressive but don't hold a candle to that of the PlayStation 3 version, so keep your expectations in line.

The multiplayer is where Modnation Racers on the PSP shines. Not only are there fully featured local and online races available, but also the option to share everything you have created with the world at the touch of a button. Everything about the competitive multiplayer racing runs smoothly except for the occasional dishonest racer online. Downloading creations takes only seconds and they are instantly accessible anywhere at anytime thereafter. Uploading is an equally swift process. The online community, though small compared to the console version, already boasts an impressive number of karts, mods, and courses to enjoy. Sifting through the online creations is also made easy thanks to a streamlined search interface. You can edit downloaded creations at your leisure, although any parts that you have not unlocked yourself will be removed until you have done so.

Graphically, Modnation Racers is middle of the road as far as PSP games go. Everything on screen is nice to look at, but a more vibrant color palette would have done some good. Given the extensive focus on user created things, the mods, karts, and tracks are adequately detailed. When racing, the action all plays out smoothly enough, though excessive explosions can cause the frame rate to dip a bit. The notoriously long load times from the PlayStation 3 version are thankfully nowhere to be found here. The audio is largely the same and includes quality voice acting. The creating and sharing features extend the longevity of this title considerably. For only $30 you get an experience comparable enough to the console version, which is twice as expensive, and more than any kart racer you are likely to find on a handheld. However, that comes at the expense of gameplay that is not as engrossing either. Modnation Racers is a quality game that is perhaps a little too ambitious for its own good. Greater focus on ensuring the AI and tracks were more fun to race with would have better complemented the rock solid creation and sharing features. Depending on how well you adapt to the sometimes demanding gameplay, Modnation Racers on the PSP is a game you will either love or hate.