Sometimes I look back on my teenage years quite fondly. I’d spend nights at friends' houses drinking store-brand soda, eating the cheapest snack mix available, playing video games, and trying not to care about the world outside. These were much simpler times in my life. My friends and I would often stop by our local video store to check out the game rentals. I’d just gotten a GameCube, and I was catching up on all the releases I had missed. I was also tired of getting my butt kicked in Super Smash Bros. Melee. Scouring through the aisles of GameCube games like an archaeologist searching for a new discovery, I spot a curious title. I was familiar with some Mario Sports titles, namely Mario Tennis on the Nintendo 64, but I didn’t recognize this one. A Toad is running away in haste next to Donkey Kong grimacing in frustration. A Hammer Brother looks up at a focused Mario as he kicks a soccer ball, causing lightning to envelop the entire stadium. It looked amazing.

I look to my friend to suggest this one and he immediately gives the thumbs up. Great, he’s played it before. No matter, it’s something new to me and maybe he hasn’t played it much. We take it back to his house, load it up, and team up for a match. Then another. Then another. We couldn’t stop until our eyes began to drift off to sleep. We rented the game almost every weekend from that point on, and it became a staple of ours. We kept this tradition up for years until, well, we grew up. There were times that I felt that maybe it was just a fad I went through as a child. More recently, however, I had the pleasure of using emulation online as a way of connecting with one of those old friends, and it was just as fun as it always had been. 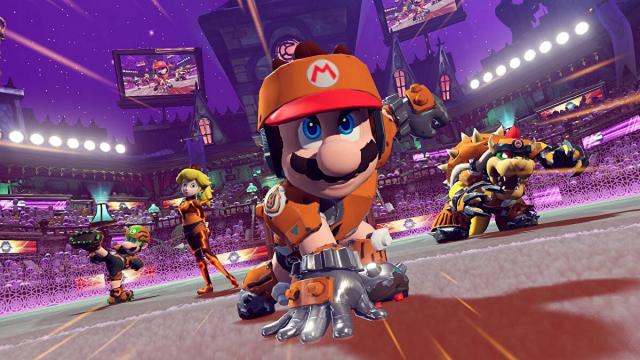 So when Nintendo announced this new game I was ecstatic. I would no longer have to resort to emulation to play a favorite series of mine. In addition, I couldn’t wait to see the improvements they had put into the series. What new modes would they have? Would they bring characters from outside the series or expand upon the game with a story mode? What items would they add? Finally, would the gameplay be as good as it was on the GameCube? Unfortunately, the vast majority of this didn’t happen.

Super Mario Strikers has always felt a bit like football-lite (or soccer-lite for all my fellow Americans). Instead of 11 players per team, there are only five, with the goalie not being directly controllable, aside from select instances. This simplicity doesn’t make battles any less intense, mind you, as the field is shortened as well, so the action is compacted into a relatively tight space. In addition, unlike regular football, excessive force is absolutely allowed. Feel free to tackle your opponent, sending them into the electrified border, or use the typical Super Mario type items like bob-ombs to explode the opposing team. It’s definitely an action packed game. 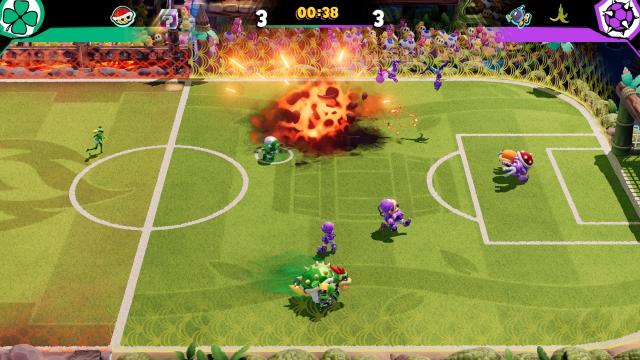 Now, Mario Strikers: Battle League is extremely solid from a gameplay standpoint. In fact, it’s better than solid. The gameplay is just as tight as it ever was, with some subtle changes. Characters have a default “type”, such as balanced or offensive, like in past titles, but these are represented as attributes. These attributes are strength, speed, shooting, passing, and technique. There are some subtle control changes as well, such as only having one dedicated tackle button that you charge instead of two different buttons, and the lack of a specific fake-out maneuver. However, these are replaced with the ability to dodge and freely pass to anywhere on the field. Lastly, instead of having one main character and the rest of the team being composed of sidekick characters (e.g. Koopa Troopas, Hammer Bros. etc), every player on your team is chosen from the main roster, so you can have Luigi, Bowser, Rosalina, and Toad as your team. I found all of these changes to be for the better. It provides more streamlined gameplay while allowing for even greater flexibility in maneuvers and strategy.

The Super Mario Strikers games have all contained a variant of the “Super Strike”, and that's no different here. Hyper Strike, much like Super Strike, is a charged up power move that can really change the tide of a game. These shots are powerful, and are worth two points if you're able to score. However, the only way you are able to make these shots is by collecting a Strike Orb, which will occasionally land on the field. These look like large electric orbs. When this happens, your team will begin to glow, indicating the opportunity for a Hyper Strike. Just hold down the button to shoot and a gauge will appear. Time your button presses correctly and you’ll have an unstoppable shot. However, even if it isn’t timed correctly, it can still do some damage. Each character’s Hyper Strike is different, and anyone caught in its path will be incapacitated for a few seconds. Even if the goalie is able to save the shot, a lot of the surrounding player characters may still be on the ground, so you still have a chance to make another shot.

Does all of this sound pretty fun? It is, but the problem lies not in Battle League's gameplay but in its content. Though the previous two Super Mario Strikers titles weren’t exactly filled to the brim with content, they both still offer more than this entry. Battle League has fewer characters than Super Mario Strikers: Charged, and fewer items and arenas than both previous releases. This feels unacceptable and a major step backwards for the series. Yes, Nintendo is planning to add extra content later on via patches, as part of its ever increasing live-service-esque model, but the content that comes on the cartridge just isn’t where it should be. 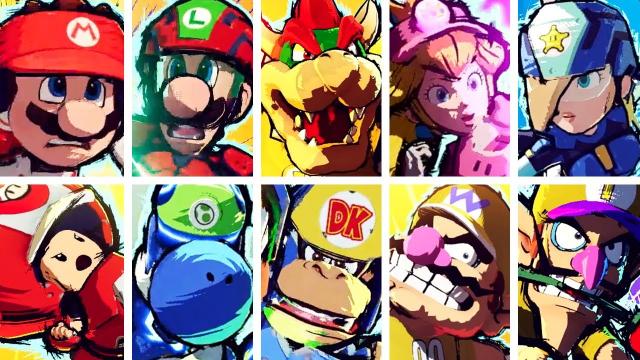 I would love to say that the amount of modes offered offsets this, but it simply doesn’t. There are only three modes: quick battle, cup battle, and strikers club. Quick battle is a simple one match game that can be done online or locally, and you can turn on and off items, hyper strikes, change the time of day, match length, and CPU skill level. Cup battle allows you to compete in a tournament for a trophy and some coins (more on that later). Initially I was greatly disappointed by the number of cups. Luckily, once you beat normal mode, you unlock another mode which adds more cups that are much harder.

Strikers club is the newest mode. This is an online mode where you join a club of up to 20 members and pick a specific character to use. You then play matches online to increase the club's ranking during seasons. However, most games essentially feel like online quick battles, so it doesn’t really feel like much extra was added to the overall content. In addition, instead of having an entire roster at your fingertips, you're limited to just the main characters of those in your club. There are supposedly unique rules to some matches, but I never encountered any through my playthrough. The online itself is only okay. I did encounter some hitching due to what I presume is a P2P network system (that is, each player acts as a server sharing information together, so it’s dependent on their internet connections). If the other player has a poor network connection, you’re in for a bit of a bumpy ride. Luckily it’s not as bad as some other Switch games, such as Super Smash Bros. Ultimate. 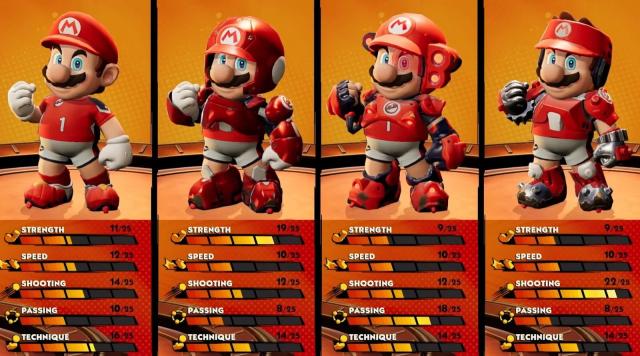 Though the amount of content at hand is not up to par, Next Level Games has taken steps to mitigate its effect. By playing and winning matches both locally and online, you'll earn various currencies which can be spent on both gear and arena upgrades. The gear upgrades are quite simple - each piece of gear you equip will add one point to an attribute and subtract from another. This allows for more customization for your character. Do you really like the way Luigi looks but want him to be stronger? Just add gear that increases his strength stat. It’s too bad that there aren’t more characters, because this would have been a great way to play your favorites without compromising your play style. Arenas can also be upgraded, but for a heftier price. By participating in the Strikers Club mode you can earn Bolts, which can be used to upgrade your stadium as well as purchase customization options. It doesn’t make up for the lack of total stages (or for the absence of hazards, like those present in Super Mario Strikers: Charged), but it at least provides a personalization component.

Graphically, Battle League is incredibly sharp. This is probably one of the best looking 60FPS Switch games that I have seen to date, due to its full 1080p resolution. I didn’t notice any dynamic resolution scaling in effect either. During cut scenes, the framerate is cut in half to 30FPS instead, but it doesn’t actually affect the gameplay itself. In addition, these cut scenes provide some fantastic visuals, with impressive lighting and nice use of shaders for the grass texture. Character models are visually stunning, especially for the Switch hardware. I particularly enjoy the Hyper Strike visual style. Next Level Games opted to utilize an art style similar to the cover artwork for the Super Mario Strikers series whenever you employ a Hyper Strike. The way the outlines and shadows of the textures move to create a hand-drawn aesthetic looks amazing. 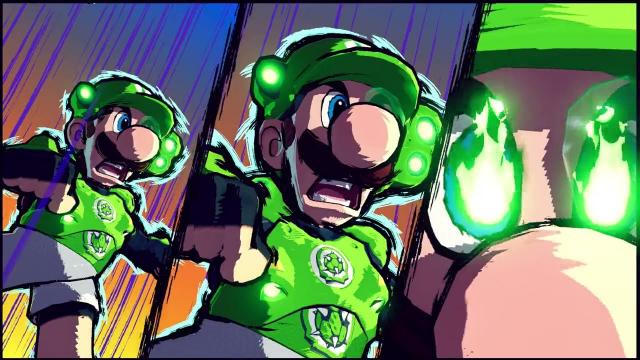 Next Level Games has created a solid foundation for a title, but that’s all it is: a foundation. It’s a barren representation of what could be. The solid gameplay and excellent visuals definitely help the game’s overall presentation on the surface, and the changes that Next Level Games has made are for the better as well, however I just cannot excuse the overall lack of content. When its predecessor from 15 years ago had more characters, more modes, more items, more arenas, and still had an online mode (for free no less), it just puts a sour taste in my mouth. It feels purposefully held back in order for Nintendo to provide additional content later on.

This review is based on a retail copy of Mario Strikers: Battle League for the NS

It's quite fun to play offline, but online is just frustration because of the lag. It doesn't use dedicated servers. Why do we pay for the online service? You can't even play 4 vs. 4 online (just 2 vs. 2). Most disappointing game of the year so far.

Nintendo totally fucked this one. -_-