A popular saying among chefs goes "you eat with your eyes first". In other words, a visually appealing dish will create a strong first impression, long before anyone has taken the first bite. In general, the same also holds true for video games. If you wow the customer first with graphics, then selling the mechanics and conceits will become much easier. Souldiers, a side-scrolling action-role-playing game that launched last month on all major platforms follows this philosophy, intentionally or not. Your first entry point to the game is its luxurious, gorgeous pixel art, which signals immediately that a lot of care and attention went into the production. The question then becomes: is the gameplay just as splendid?

Souldiers has a very intriguing premise. It takes place in Zarga, a vaguely medieval kingdom at war with the Dadelm army. In order to defeat Dadelm and end the war, the king's sorcerer suggests the Zarga troops embrace a new attack strategy. The soldiers, led by General Brigard, take up the prescribed positions, but calamity strikes when an earthquake buries the entire Zarga force. Suddenly, in the darkness, a Valkyrie, an angelic being who transports the dead, arrives to ferry Brigard and his men into the safety of Terragaya, a place of peace beyond the mortal world. Once in Terragaya, it's up to the player character, a nameless soldier in the Zarga ranks, to uncover the mystery of his arrival in this limbo between life and death. 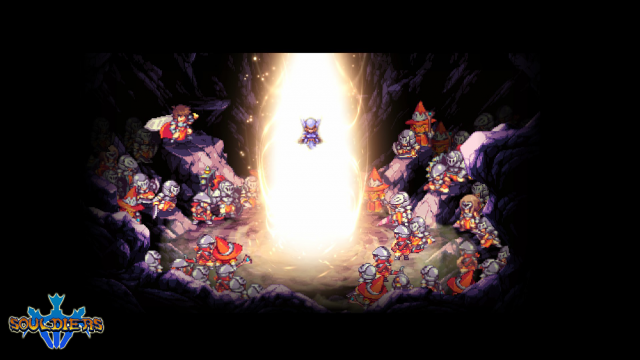 Like so many modern games, it's impossible to describe Souldiers with a single classification or genre. It's an action-RPG focused around Metroidvania-style backtracking and exploration, dangerous Souls-like combat, and precision 2D platforming. The game doesn't excel in any of these categories, but it is entirely competent in all. It's a true jack-of-all trades, master-of-none title.

Let's tackle the RPG mechanics first. One of the very first things you'll do as a Souldiers player is pick your class. Three are available: the sword-carrying Scout, low on magic ability but high in stamina; the magic-using Caster, who has command of the elements; and the nimble Archer, who fights from afar. Each class has its own stats, strengths, and weaknesses, and each will grow in experience as you take down monsters and complete quests. The downside to this arrangement is limited character customization. When you level up you receive some automatic bonuses to health and stamina, but you don't have free reign over the distribution of points. Truly, you only have authority over how to spend "mastery relics" on active and passive skills. 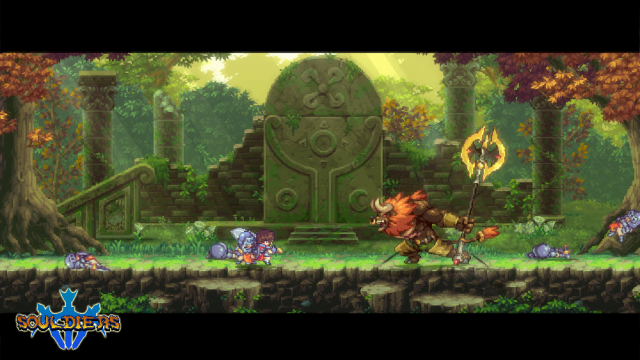 What you can't obtain with experience points, you can achieve to some degree through exploration. Throughout the vast and geographically-diverse landscape of Terragaya, you'll find crafting materials used to upgrade your weapons, armor, and sub-weapons, plus accessories that boost health, attack, stamina, etc. Overall, exploration in Souldiers is rewarding and engaging — to a point. The greatest drawback comes alongside its dungeons, which are simply too big and too laborious, and disrupt the pacing of the game.

Next up is combat, arguably Souldiers' greatest asset. The game aspires to Souls-like fighting, and it succeeds. With tense enemy encounters and a combat framework designed around dodging, blocking, parrying, and stamina/magic maintenance, it recalls those deadly skirmishes found in From Software's signature series. Things can turn deadly very quickly if you rush in headfirst without a strategy or the right skills. It's potent stuff. 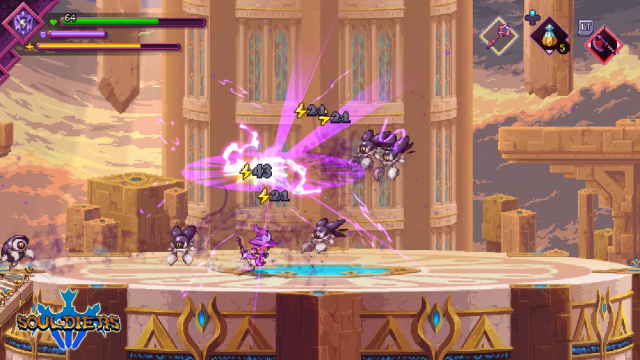 While combat per se is rewarding, the combat scenarios are, at times, quite frustrating. Souldiers suffers from some big difficulty spikes, particularly with bosses, but also in some instances with the rank-and-file monsters found lurking in dungeons. This issue is exacerbated by a few things: enemy ambushes and traps within dungeons; checkpoints that are few and far between; expensive health potions and limited health drops; and, most insidious but fortunately most fixable, long loading times.

Loading screens are a constant presence in Souldiers, since they pop up after each untimely death. Since the game is extremely difficult, even on the standard setting, and because so much of it is built around trial and error, you'll see these screens often, each one lasting 30-50 seconds. That doesn't sound egregiously long on paper, but it adds up. As a result, the ratio of time spent waiting to jump back into the game and the time spent playing the game is out of balance. 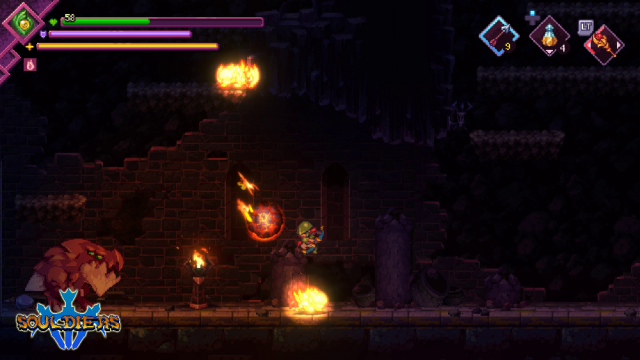 The good news is that on June 30 developer Retro Forge, working in partnership with publisher Dear Villagers, released an update to Souldiers on PC that included bug fixes, more generous checkpoints, reduced mana costs for skills, more powerful player attacks, and more. Once this update reaches Switch and other consoles in the coming weeks, it should make for a less punishing experience and, consequently, less time idling in a loading screen.

That means more time to spend on the game itself, which is rather massive. To see everything Souldiers has to offer, you'll need to set aside between 40 and 50 hours. You'll rarely run out of things to do, thanks to multiple side quests, scores of secrets, and the vast real estate of Terragaya.

Speaking of Terragaya, it's absolutely gorgeous. While Retro Forge missed the mark with difficulty balancing and technical performance — at least on Switch — it succeeded wildly with its luxurious pixel art. This is one of the prettiest 2D indie games of the year, thanks to a 32-bit art style rich in detail and personality. The animations are smooth and energetic, the foregrounds and backgrounds grant incredible depth, and little unexpected details here and there bring everything to life. 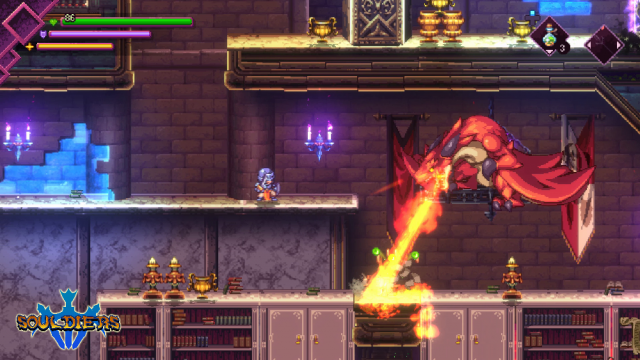 Souldiers benefits not only from lovely artwork; its retro SNES-era soundtrack, composed entirely by Will Savino, is also outstanding. "Sibuna Desert", with its rhythmic Middle Eastern percussion sounds, is a standout tune. "Deeper", which deploys chilly, echoey notes to summon the feeling of delving into underground caves, is another good one.

The audiovisual component of Souldiers is great, no question. Indeed, it makes for a wonderful first impression. Unfortunately, due to overlong dungeons, difficulty spikes, and long loading times, the overall experience doesn't quite live up to the game's production values. That said, developer Retro Forge has turned in an expansive action-RPG with an interesting premise, engaging combat, and a huge, diverse world waiting to be explored. There's greatness buried somewhere beyond Souldiers' beautiful graphics, waiting to be let out.

This review is based on a digital copy of Souldiers for the NS, provided by the publisher.