Square Enix in its latest earnings report announced the initial sales for Marvel’s Guardians of the Galaxy fell below expectations. However, the publisher is working to increase sales to make up for the slow start.

"The HD Games sub-segment launched Marvel’s Guardians of the Galaxy in Q3," reads the report. "Despite strong reviews, the game’s sales on launch undershot our initial expectations. 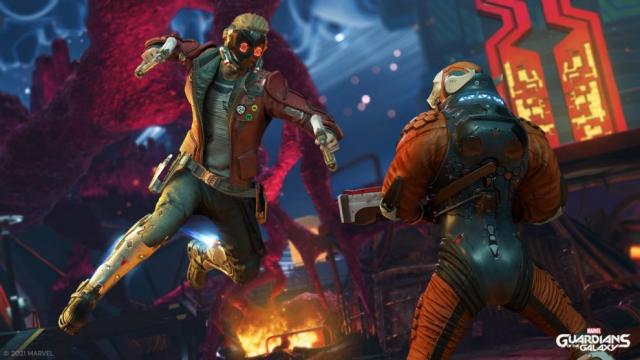 "However, sales initiatives that we kicked off in November 2021 and continued into the new year have resulted in sales growth, and we intend to work to continue to expand sales to make up for the title’s slow start."

Marvel’s Guardians of the Galaxy is available now on the Xbox Series X|S, PlayStation 5, Nintendo Switch, PlayStation 4, Xbox One, and PC. The Switch version is a cloud release.

What a surprise. SE has yet another western release that falls well below expectations. I wonder how much this one sold, 8 million copies?

It didn't chart high enough for that.

I'd be very surprised to hear it sold even half of that.

I would say a quarter of 8 million would even be optimistic at this point.

I feel some have missed out on the positive news that the game had seen 'sales growth' over the last few months, so they're committed to make the games overall sales reception work.

One of the most poorly marketed games of recent memory, such brilliant story telling and world building but none of the marketing materials quite captured this. The only reason why I picked it up is because of word of mouth and the digital foundary deep dive, to my surprise it was probably my favourite single player game of 2020.

I never even planned on getting it but I've heard nothing but good things so I have it on my list.

I blame both Marvel's Avengers and that annoying E3 showcase.

Could be the "fault" of the Avengers game, since that one had a.. lukewarm reception people didn't bother with this one.

A shame it flopped so hard on release (Square had discounted it as low as $25 by Black Friday), I really enjoyed it and would love a sequel, but any sequel chances seem dead now.

Hopefully Square puts Eidos back on Deus Ex: Adam Jensen series now, because they took a break on it mid trilogy/series to work on Shadow of the Tomb Raider and Guardians of Galaxy, both of which Square said underperformed their expectations. Square was also disappointed by Deus Ex: Mankind Divided sales of course, which makes 3 games in a row by Eidos that Square leadership was disappointed by, but they should still let Eidos finish the trilogy/series.

Very unfortunate. The game is very good of what I played

I'm not surprised it flopped. I don't think many knew the game was releasing. Also people probably still had a sour taste from marvel avengers, the other game from square enix. I know I wasn't excited when I saw square enix was behind another marvel game.

Also bad marketing, did it even get any?

But then I saw the reviews and decided to get it. I thought the rave reviews may have given it a second wind.

Should have put it on gamepass from day 1

They haven't handled hitman so now they released them,

What's next tomb raider and marvel properties being released too?

They can have my money when the game is $30.

Must have been some bad blood because of the Avengers fiasco. I know I`m looking at it but will wait for step price drop.

Sounds like they are going 'we have taken steps to increasing sales since'. Sometimes games are more evergreen than initial...though the discount strat makes that go more 'Days Gone', and less 'Ring Fit Adventure'.

It had a poor showing at E3. Looked like it was just more Avengers which bombed. They dumped it out a couple of months later. I want to get it but been told to avoid the PS4 version.