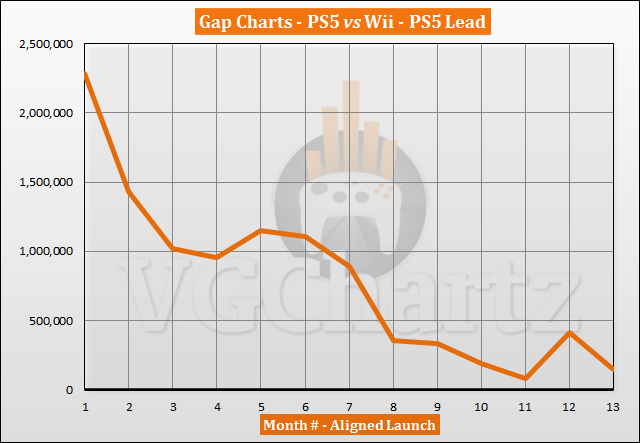 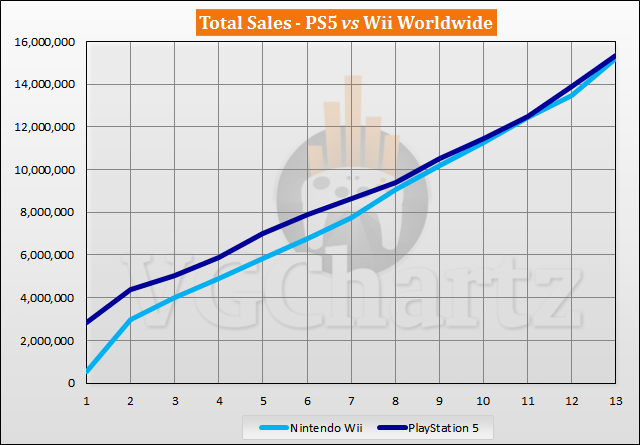 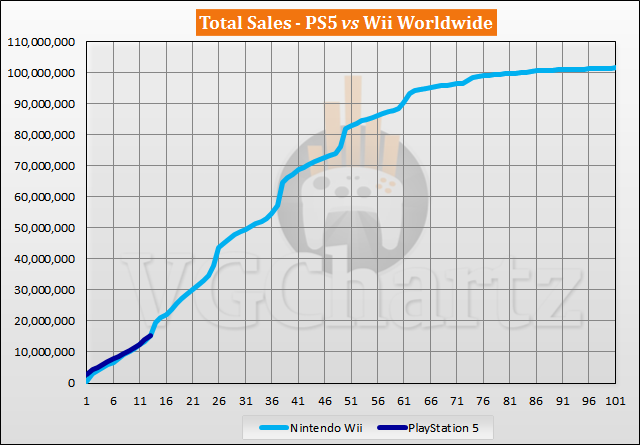 Wii had a baseline of 350k in its second year and a few weeks around 500k, which is more than PS5 was able to sell during most of this holiday season. There will be a cross next month and then the gap should increase in favor of Wii. I don't see a chance for PS5 to reach 20m before Wii, because shortages are expected to last during whole 2022.

The "shortages" are for the consumer. Demand far exceeding supply. It's not that they are having unusual trouble manufacutring, they can't match unprecedented demand. But supply will continue constant expansion.

Wasn't any different for Nintendo back in 2007/08. PS5 is selling lower than PS4 so we know that Sony could produce more if they would have all necessary parts. Consumer demand was actually expected and Sony needed to lower their forecast due to chip shortages.

You have very high expectations for both new consoles.

Why the bottom range figure of 20 million ahead would leave it just above the PS4's numbers as to the extra 10 million if it sells around the same as the PS4 with a similar time line then it would come down to how quickly they cutback end of gen production , Sony's history of strong end of gen support ended with covid and the production issues lead to PS4 having it's legs cut out from under it, before that sales in the 130- 140 million range were on the card , but with the strong PS5 demand and more supply coming online those numbers seem very reasonable .

Terms of Service : All my bullshit is subject to alteration by way of after the fact editing of posts in my favor and can only be disputed by way of a nonrefundable fee of US $1000 tax deductible tell them I'm a charity and all decisions are decide by an independent judge mjk45 and are final with one exemption that being a non refundable fee of US $10,000 handled by an appellate judge (reference the above independent judge for further info).

Race to the fastest to 20 mil. For the PS5 to still be ahead of the WII is commendable.

Well, to be honest I don't see much chance of PS5 getting to 20M before Wii. PS5 has had very moderate sales this Christmas due to shortages, and has sold far less than Wii did in the same period. Wii sales in Christmas weeks will be blatantly higher than PS5.

This will be the last month for PS5 to be ahead Wii for at least the next two years. Wii sold a lot faster than PS4 and PS5 is selling lower than PS4 after 13 months. Wii had heavy supply issues in its first year. This changed a bit in Wii's second year. I don't expect such a change for PS5 due to the global chip situation.

Were the Wii's hardware droughts as bad as PS5's? I remember the Wii being impossible to find for a couple of years, but there was no chip shortage back then...

I think it may have depended on where you were. In the US the second hand market for the Wii was not as robust as the PS5 second hand market, and that’s indicative of Nintendo doing a better job of meeting demand at the time.

Anecdotally, I recall anyone I knew who wanted a Wii was able to get one relatively easily compared to PS5. But that could also just mean that bots weren't advanced enough to suck up the inventory.