Pokémon Brilliant Diamond debuted at the top of the UK charts, while Pokémon Shining Pearl debuted in second place. The multiplatform game, Battlefield 2042, was in third place.

Pokémon Shining Pearl, the worst selling of the two games, alone sold more retail copies in one week than Metroid Dread has sold in seven weeks. 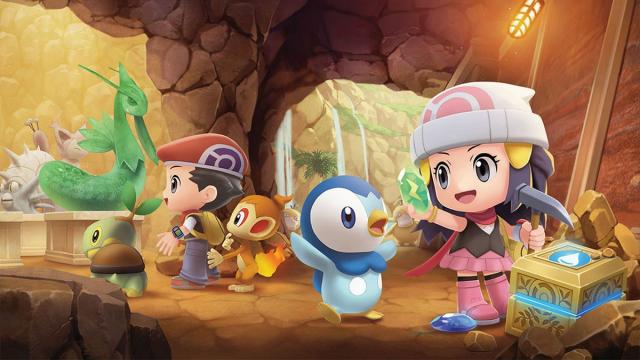 "Pokémon Brilliant Diamond (No.1) & Shining Pearl (No.2) are the 2 best-selling boxed games in the UK last week, which means Battlefield 2042 has to settle for No.3. Combined launch sales for the Pokémon games are down 26% over Sword/Shield, and up 13% over Let's Go Eevee/Pikachu," said Dring.

"Pokémon Brilliant Diamond is the biggest Switch game launch of the year (boxed sales) in the UK, and that's without counting Pearl. Comfortably ahead of Mario 3D World, Monster Hunter Rise and Zelda: Skyward Sword.

"Combined together, Pokémon Brilliant Diamond/Shining Pearl's boxed launch sales are the second biggest of the year across all platforms, only beaten by the multiplatform FIFA 22.

"To put Pokémon to scale. Pokémon Shining Pearl alone (the weakest selling of the two) has already sold more copies in 1 week (UK boxed sales) than Metroid Dread has managed to sell since it came out 7 weeks ago."

Pokémon Brilliant Diamond (No.1) & Shining Pearl (No.2) are the 2 best-selling boxed games in the UK last week, which means Battlefield 2042 has to settle for No.3. Combined launch sales for the Pokémon games are down 26% over Sword/Shield, and up 13% over Let's Go Eevee/Pikachu

Was to be expected. Sword/Shield's launch was huge, also Galar was based on the UK.

I mean it IS a remake unlike Sword/Shield that was a new mainline game.

Did they Boost switch sales? There’s no mention in the article, only a Boost to Ps5 sales.

Sad why? Its pokemon, its to be expected.
In fact the difference in graphics between this remake and the DS original is way bigger than the difference in graphics from metroid and the 3DS metroid.
Metroid is a niche series, its never going to beat the likes of pokemon or Mario in sales.
I'm just happy that the switch is having good sales and more people enjoying this console.

I already have this pokemon but will not likely even play it due to lack of time.

It's sad because games that are genuinly great and that got alot of effort put into get outsold by comparatively low effort games, selling solely because they're part of a huge franchise. It's not about the graphics.

Like i said it’s Pokémon. It has a bigger market share due to the fact it sells to a lot of kids.
I actually prefer games to not sell much so i can grab them on sale. No one is forcing you to buy Pokémon. Just buy what you want.

it has disappointing sales becoz the remake was a disappointment,
game freak will remember not to take shortcuts and give it to other devs nxt time,

they fcken ruined diamond and pearl

It's the second biggest launch of any Switch game in the UK. Nothing disappointing about it.

Sounds about right. Will probably sell like 18 million globally. I'll be real interested to see how Pokemon Legends tracks against this seeing as how they are only two months apart which is such a bizarre decision.

Been playing SMT5
Forgot this was coming out :V

maybe due to the holidays coming? xmas presents?

the sales of battlefield will be high in digital sales. the disc is going to be only anygood as a boot disc after couple of updates. its only really single player games worth collecting nowadays

Obviously, because one is a remake and the other is a new original, besides the global economy is worst every year (inflation, increase of taxes, famine, etc)