Tweet
by Daniel Parker , posted on 01 October 2021 / 1,686 Views
Sometimes it can be relaxing to sit down with a game and not worry yourself about how to improve your strategies, positioning, or perhaps even your coordination with other players.  While it isn't a suspenseful 20+ hour experience, Lake sells itself well on its peaceful atmosphere, which makes it easy to pick up and play, although several design decisions prevent the game from shining.
Players take control of Meredith Weiss, a software developer who's spending two weeks in her hometown of Providence Oaks, to fill the mail carrier position for two weeks, left vacant by her recently retired father while also reconnecting with the town's residents.  Unfortunately, mail delivery is both the game's central component and ends up being its most mundane activity. 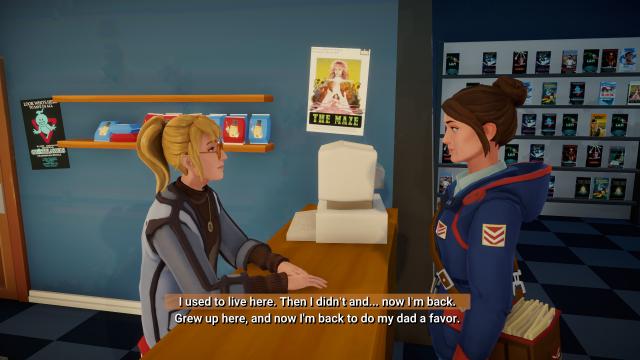 It's made particularly monotonous by the fact that, unless you drive the way the game wants you to (absolutely perfectly), obstacles like stop signs and traffic lights, among other things, will force your mail truck to an immediate stop, killing your momentum.  You're also forced to slow down when close to other vehicles and pedestrians in your path, so that you don't collide with them, which makes driving even more tedious.
And yes, of course, this isn't Grand Theft Auto, where you can plow through anything in your path, but accidentally nudging a fence shouldn't as punishing as it is here.  Especially when you'll be spending ample amounts of time driving around delivering mail.  Choosing to be reckless in other games where you're not supposed to attack bystanders will typically just cause them to run or jump out of the way.  Here, though, the NPCs act as though they're the ones playing and it's you who must wait for them.
What hurts the driving aspect of the game even more is that Meredith rarely ever comments or makes a remark on anything while driving.  The mail van can even flip over and slide down the road and she'll remain dead silent through the chaos.  Luckily, there is an option to reset the vehicle's positioning, however this only works when you're in the mail truck.  Forgetting the type of game I was playing, I thought I'd just get out and flip the truck over because it's what I'd normally do in most other titles - this forced me to reset the game, because I'd ended up stuck with the truck above me, surrounded by large impassable boulders. 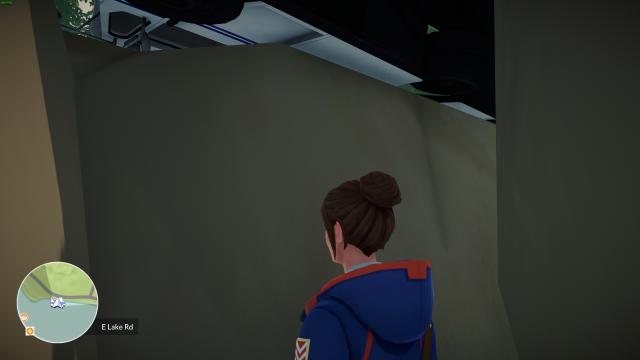 My experiment in off-road driving was for a good reason though, as the mailing route often has you traveling the full distance around the titular lake.  A good way to save time on these routes is to simply drive into the lake, which immediately teleports you to the post office.  Sometimes, however, without the right speed or angle, boulders will get between you and the lake and flip the vehicle.
Be warned that all of the featured gameplay elements have slight issues like this.  Walking, by default, is extremely slow and plodding.  There's a button that allows you to walk faster, but at no point in the game is there a reason to walk at the default speed.  Additionally, regardless of your walking speed or whether you're walking upstairs or down a slope, the animation is the same throughout.  Even the simple task of placing mail into mailboxes, or dropping parcels at doors, feels like a chore.  It's little more than tedious busywork that far outstays its welcome.  This, combined with Meredith's slow-paced movement speed, makes Lake feel very momentum-starved, which makes accelerating into said lake that much more necessary. 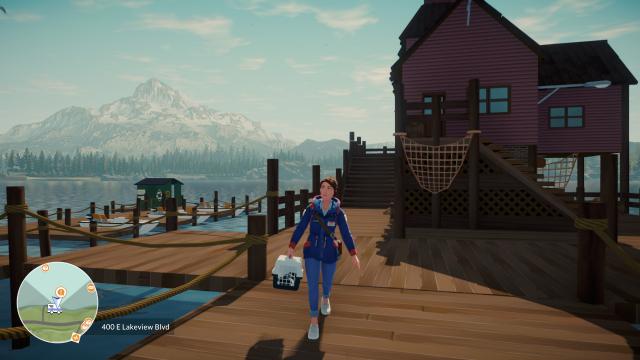 Even though the game drops the ball with its animations, the cel-shaded graphics are certainly colorful and vibrant.  In fact, the game's many characters, props, and environments are well-crafted and the game can look really pretty at times, even if it is a little rough around the edges.
Sometimes, though, a random bug will occur where on-screen prompts (like getting into the mail truck, or placing mail into the mailbox) simply will not work, and the only way around this issue is to exit the game entirely - even reloading the save from the main menu doesn't help.  There are other minor issues too, like for example if a pedestrian spawns in the middle of the street during a cut scene then they'll just phase through cars. 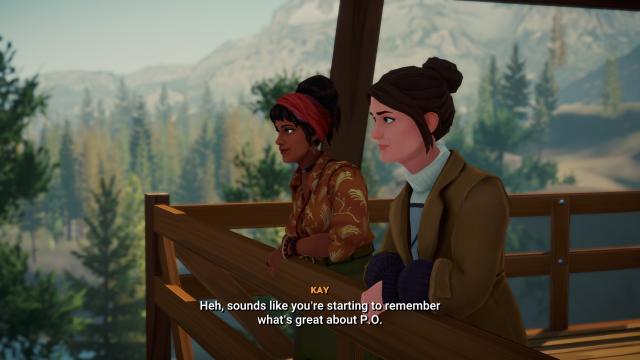 With so many issues plaguing the game, you might think Lake is best highly avoided, but there are two features that largely hold the experience together: the game's vocal talents and the easy-to-follow and likable story.  Meredith spends a lot of time figuring out what she wants to do with life after her two weeks in Providence Oaks, as well as repairing relationships with the people she left behind, so the narrative feels quite grounded and realistic.  It's also enjoyable finding out how your decisions and interactions with the game's inhabitants impact the story.
Each of the game's character's personalities is handled well by the voice artists, which makes character interactions feel that much more genuine.  It's hard to imagine Lake being an immersive experience if not for the work of the voice actors bringing life into the game's world.
On the subject of character interactions, though, there are no indicators of any sort to convey relationship standings, or how the other characters feel about Meredith, nor is there a progression tree to log your decisions (think Detroit: Become Human), so it's not easy to reach different scenarios through alternate playthroughs.
Playing through Lake a second time will only expose how little your decisions actually matter anyway, as there are several points in the game where regardless of what you say to another character, it'll always lead to the same outcome.  This is an issue that's compounded by the fact that sometimes there's no clear difference between the various choices.  Multiple responses can all essentially say the same thing, albeit worded slightly differently.  Having a feature to show relationship progression would therefore give the player positive feedback that's otherwise lacking and improve the overall experience. 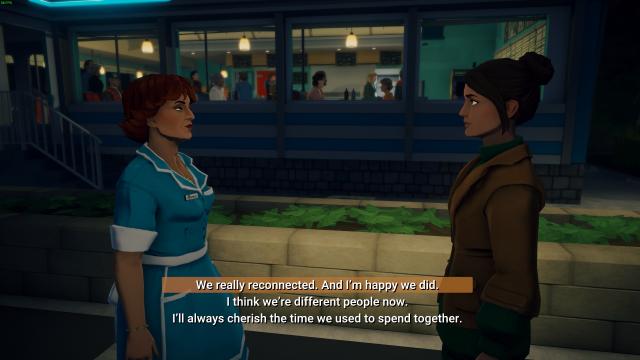 The character interactions are undoubtedly Lake's strongest aspect, although ultimately the game will force you to play these out the way it wants you to.  Lake's biggest offense ultimately is its inability to provide closure after building up the characters as well as it does.  There's no jump-cut to show what's happened to Meredith after her two weeks of living in Providence Oaks and interacting with its locals, for example.  The game simply abruptly ends panning out towards the lake with Meredith driving away, with the save data allowing you to go back just far enough to choose a different ending.  Like many of the game's mechanics, it all feels a bit incomplete.

This review is based on a digital copy of Lake for the PC, provided by the publisher.

Lake is, unfortunately, the minimum I expected it to be rather than the maximum. It's intended to be laid back and relaxing, and that it is, but there's a fine line between calming one's self from a stressful day of real life and just plain boredom though. One restores your ability to process life while the other saps away at your mind and your will to do anything.

The underlying story was a thoughtful one that spoke to my own past struggles with uncertainty about what I wanted in life and that's a major positive for it that by itself justifies a playthrough. But only a single playthrough.

The issue here for me is the scale of this project. Lake is TOO simple to justify its entire duration really. I mean, for example, two songs total? For 8 hours? A game this long, with this scale of a world, demands more to do and to interact with in the end. It feels like this was supposed to be a bigger game; like the creators had bigger ambitions for it that they weren't able to realize with their limited resources and yet couldn't bring themselves to compromise any more by scaling down the world such that the number of people therein might be commensurate with the number of homes, etc.

Lake almost got banned in Australia over a question over whether or not the player character would take drugs.
Always entertaining to see what our classification board messes up with.

I was happy to get this as a simple chill-out game but skipped it as I felt it was overpriced. Will keep an eye out for when it goes in sale though.