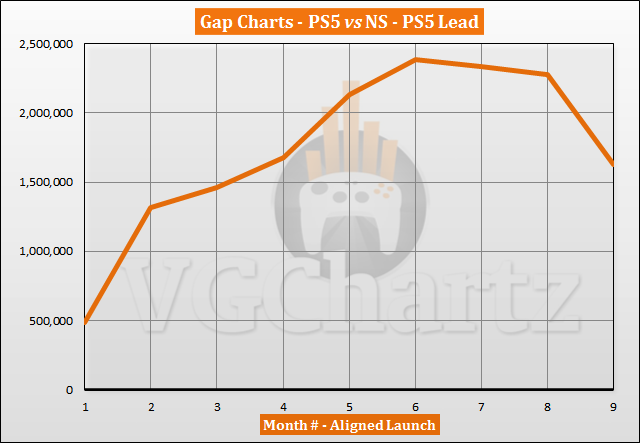 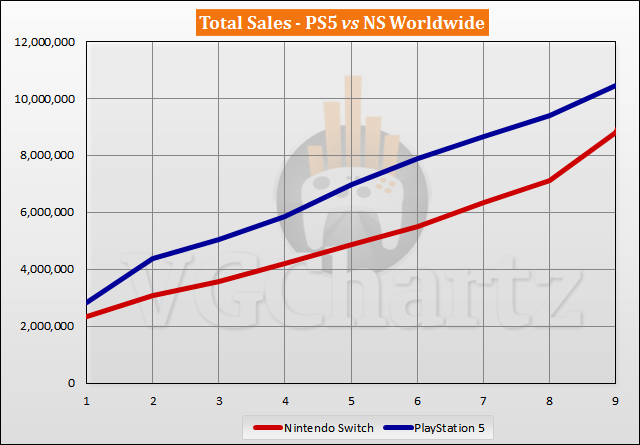 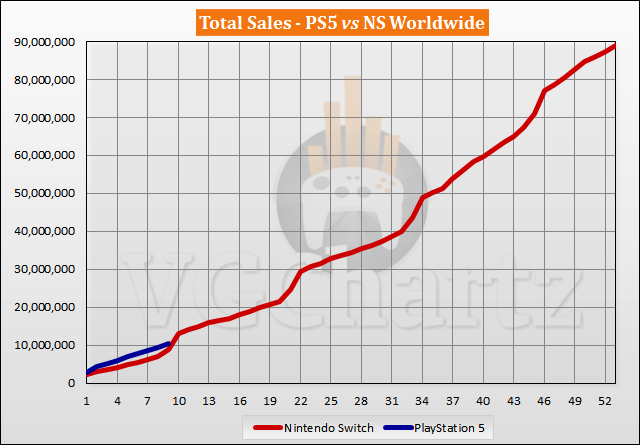 The Nintendo Switch did not reach current PlayStation 5 sales until month 10 where it had sold 13.12 million units.

Will we see here the double helix pattern as well, as with PS4?

It will highly depend on the stock PS5 has for FY2021. Sony confirmed that they have enough chips to get 22 million by the end of FY2021(ending March 2022) and said they aim to break PS1 FY record which is 22.6 million during the FY2022. Most likely there will another helix during Switch's 4th year where animal crossing NH released, but between now and then it depends on PS5 stock. The PS5 needs to get to 30 million before July 2022.

If Sony meet their targets, Switch might win this holiday, but it will quickly lose the lead until maybe holiday 2020. Switch 2nd FY shipments reached 17 million, compared to a targeted 22.6+ million for PS5.

Their goal is 14.8 shipped in the current FY (which is FY 2022). They shipped 7.8M consoles in FY2021. Add those two together and you get 22.6. The author of the post you are referencing that discusses 22.6M shipped IN FY2022 was taken via a Japanese site where translation could have caused for misinterpretation. Literally everywhere else it says they projected 14.8M for this FY.

PS5 released in November so its first FY accounts for less than 5 months. If Sony meets its targets, the Switch should not be able to retake the lead until late 2020 at the earliest.

And genuine question, what is this I'm reading about a misinterprtation? Do have a link confirming this? Coz there has been several articles later corroborated by Jim Ryan about Sony aiming for the PS5 to set a FY record in its 2nd "complete" FY. Maybe the only misinterpretation here is mixing up Playstation's record (PS1's FY1998) with the targeted PS5 total by FY2022. Regardless, Playstation's record sales couldn't be far behind 22.6 million so the point still stands.

Maybe it's my misinterpretation of your comment then. I thought you were suggesting they'd sell 22.6M in FY 2022, not FY 2023. If over 22.6M shipped in FY2023 is their goal then, well, that's their goal. I personally do not think that this is going to happen. Mostly because even at PS4's peak it hit just 20M in a FY. Breaking that and the record in it's second full FY would be a huge feat.

Maybe we should just use the actual year (i.e. FY2023) instead of second, third, fourth, etc. I think it would help people who could misinterpret like me.

The comment I replied to was asking about whether we'll see a "double helix" pattern which has to take into account mid term sales, which is why I'm considering Sony's targets.

Otherwise, I'm in agreement that these targets are a bit optimistic, especially when all early big titles are crossgen. I don't think the demand will be high enough even if they manage to produce enough units but we'll see.

Thanks for clearing that up. Sorry for the wrong information.

226-million PS5 sales! What I took out of this is a shortage of decimals can lead to a shortage of stock .
226 million PS5's for fy 2022 no wonder there's a stock shortage 😜
If Sony want to fix this problem I have plenty of decimal points for sale.

22.6M is total, from the start of the PS5's life until March of 2022. Switch sold around 20M in that same timeframe. If Sony meets their shipments they will still beat Switch, but not by as large of a margin as you are suggesting.

Quite interesting discussion here on my comment. Thanks guys. So it really seems to become an interesting thing to watch from here on out. I am all for it will come back for the future comparison articles to see how it turns out.

Imo, PS5 will sell a bit faster than PS4 and so will lead the Switch for a bit. But i wonder if Sony will be able to reach the highs the Switch currently has that late in it's lifecycle. Switch sold almost 30 million last year and even the PS4 with no competition peaked at 20 something millions. So i'm assuming Switch will catch up once they reach it's peak.