After many delays, Super Nintendo World had its grand opening at Universal Studios Japan on March 18.

Universal has yet to officially announce a Donkey Kong expansion for Super Nintendo World, however, images of a concept model have been posted online that are clearly Donkey Kong-themed. The concept suggests there will be a mini car rollercoaster. 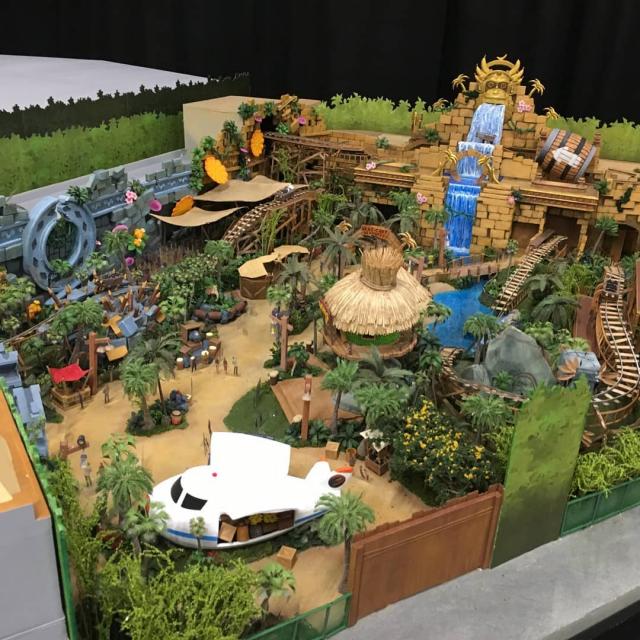 Super Nintendo World will open in the US at Universal's upcoming theme park, Epic Universe. Construction on the theme park was delayed in July 2020 due to the COVID-19 pandemic, however, in March construction had resumed. The US park isn't expected to open for many years.

Neat. Seems like a logical next step for the Nintendo World after the main Mario area. Further extensions could probably a Zelda and Pokemon subarea. I hope I get the chance to visit one day. Or, even better, Universal makes a European park finally.

If this turns out to not be a Donkey Kong park I'll be even more pissed.

Why wouldn't it be and what could it be instead?

The concept model looks completely like Donkey Kong to me, there's even his face up there.

How do we know this concept model isn't just fan made?

We don't know anything.

But based on Nintendo's recent treatment of Donkey Kong, ESPECIALLY the fact that they ignored his 40th anniversary, I still doubt it's a Donkey Kong expansion to the park.

Plus a barrel with an arrow, it's DKC

As I said, how do we know this concept model isn't just fan made?

Make your own ideas I am only stating observations!

I've made my own ideas lots already, I'm just sick of Nintendo ignoring their other IPs in favor of endless Mario shit.

You just don't get how much Donkey Kong means to me and a lot of other people, just like Nintendo doesn't realize that either. -_-

Chill, there will be another DK game eventually.

There should've been one made earlier for this year as a celebration of DK's 40th anniversary, but NOOOOOOO, at E3 we got "SOOPUR MUNKIE BAWL, HYUK HYUK!!" instead.

Super Monkey Ball isn't Nintendo's doing though, and is separate from whether or not a Donkey Kong game happens.

It was still an insult that they put that in instead of any Donkey Kong related announcements ON DONKEY KONG'S 40TH ANNIVERSARY.

If you say so.

Super Monkey Ball is from Sega. They just payed Nintendo to show it in their direct.
It takes years to develop games nowadays. Maybe a DK game is in development right now, who knows?

A European park would be great.

Doubt it’ll happen. Disney Paris and a small handful of other parks have the theme park market cornered. At one point in the 2000s Universal owned Port Aventura near Barcelona but that park is on it’s own again.

Well then we'll just have to tip the balance in Universal's favor then.

Please be real. Donkey Kong really needs to be brought back into the mainstream.

Why am I the only one here who actually cares about this?!!