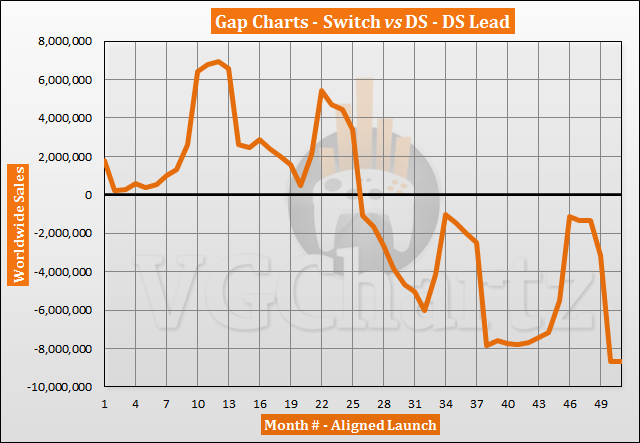 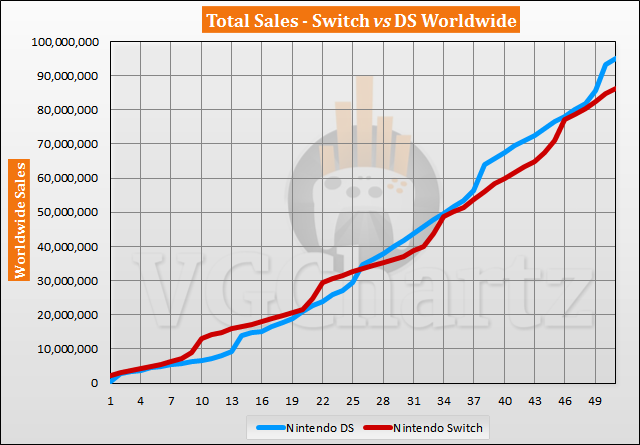 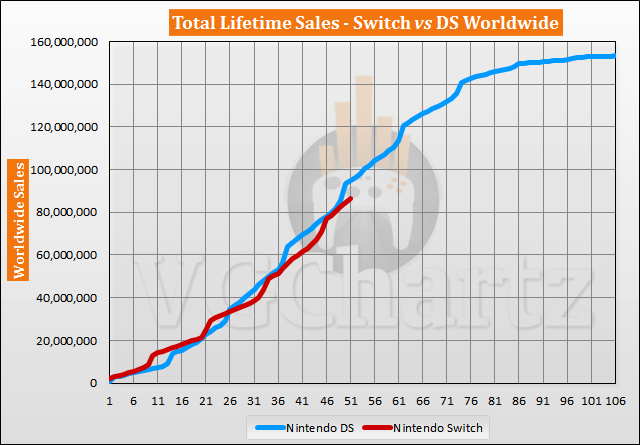 May 2021 is the 51st month that the Nintendo Switch has been available for. During the latest month, the gap grew in favor of the DS by 22,644 units when compared to the Switch during the same timeframe. In the last 12 months, the DS has outsold the Switch by 1.10 million units. The DS is ahead of the Switch by 8.68 million units.

Now knowing 2022 will be FILLED with games, i feel like there is a good change Switch won't drop too much next year. It will have a long lifecycle if their output is that strong in year 6 and they probably will give it one more 3D Mario game too and MP4 and Bayo 3 aren't on the radar.

Without the holiday seasons aligned, it's hard to say who's really in the lead here.

Switch might well pull ahead again over the next six months.

Ds is definitely still in the lead. I'm guessing the switch will be at around 103 million by the end of the year. It will fall just short of passing the ds.

The long term will be interesting if Nintendo follows through with the "halfway through its lifespan" claims.

Two more holiday seasons as their flagship and it really could make it beyond the 150 mark, even if a replacement system was to arrive and coexists with the Switch during its final years.

I think this 2021 is decisive for Switch. The 5th year confirmed the decline of DS in sales. If Switch also starts the decline in sales, it will surely finish around 135. If it manages to match or overtake 2020, it has a chance to finish close to 150 or surpass it.

I can't see it beating last year, but it's possible. The most likely outcome will be an almost duplicate of 2020 before the sales start to decline. However, if it drops 5 million per year each year, we're looking at 150+. I'm under the assumption that the replacement will be holiday 2024/march 2025.

Totally agree with the replacement prediction. I don't see the Switch 2 (or whatever comes next) before 2014, not with the sales that the 1st currently has. However, I do think that 2021 could be the peak of Switch sales. I continue to believe that December is missing a game to be announced, otherwise I can't explain why Pokemon Legends is coming out in January, such a disastrous month for game sales, and not in December. I think that in December there will be a big production game that will be released with the tiring Switch Pro, and this duet can boost sales at the end of the year.Otherwise I can't explain why they abandon a game that can perfectly sell 20M in such a disastrous month.