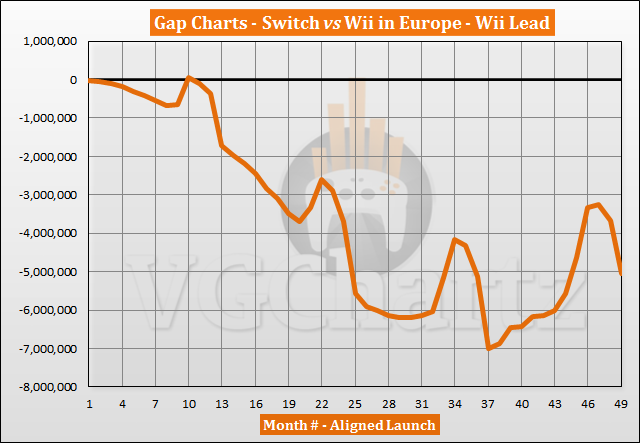 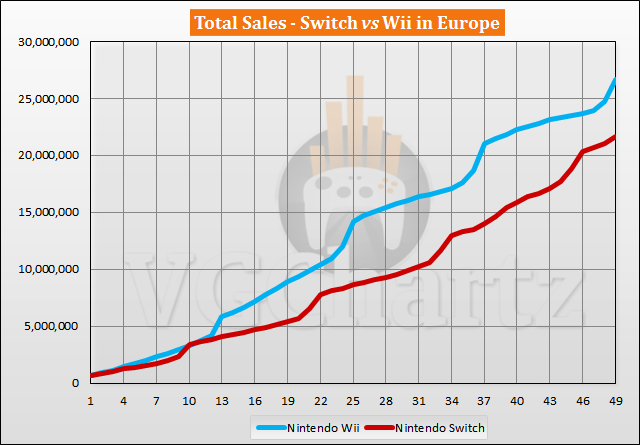 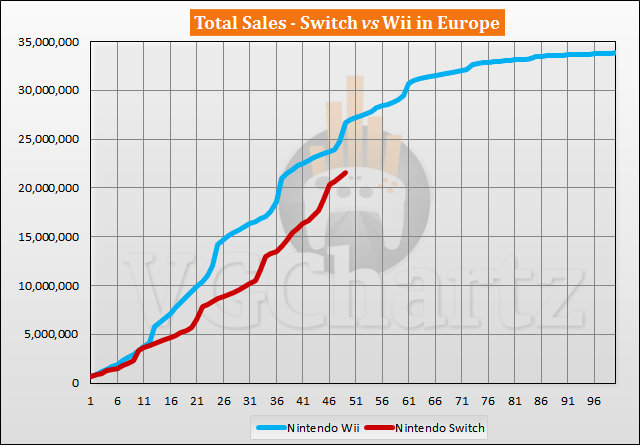 March 2021 is the 49th month that the Nintendo Switch has been available for in Europe. During the latest month, the Wii grew its lead by 1.48 million units when you align the launches of it with the Switch. In the last 12 months, the Switch has outsold the Wii by just 1.95 million units. The Wii is currently ahead of the Switch by 5.04 million units.

The 49th month for the Nintendo Switch is March 2021 and for the Wii it is December 2010. The Switch has sold 21.61 million units, while the Wii sold 26.65 million units during the same timeframe. The Wii sold current Switch sales in month 39.

The Wii sold 33.88 million units in Europe during its lifetime. The Switch needs to sell another 12.27 million units to outsell the Wii.

Switch is still accelerating while the Wii visibly slows down a lot already. While the gap is substantial, I do think the Switch will close the gap next year (as in end of 2022) and pass the Wii, never looking back

I think the Switch has a shot at 40mil in Europe.

That will be tough, but it's not totally out of question, true. Last year there were ~7M Switch sold in Europe, and it looks like sales are up so far compared to last year. Another year with similar sales would set the Switch to ~27M, and from there it's not impossible to get to 40M.

That being said, I don't expect the Switch to sell like this forever, and it's not sure it will have the legs to get past 40M. But I think 35M are pretty much a given now unless the console sales come crashing down that long-prophesized cliff...

Well, that's the last big holiday for the Wii and definitely not the last one for the Switch

Switch is catching up

I think now's the time for the Switch to capitalise on. Pivotal year for the race in Europe

This will be pretty close in the end. If the Switch can maintain it's momentum a bit longer it will pass the Wii, as this now is the last big holiday for Wii.

Interesting. I think Europe will be the 1 region where the Switch doesn't surpass the Wii. It would need a consistent and long life span to do so. Switch Pro will help but I don't know if it'll make up the difference.

Well the Wii had massive competition. The Switch doesn't, no Xbox or Sony portable, not even an Apple portable gaming machine yet... a corporate dream come true.

lol people downvoting basic facts, I said the Switch doesn't have any portable competition like a PSP etc.