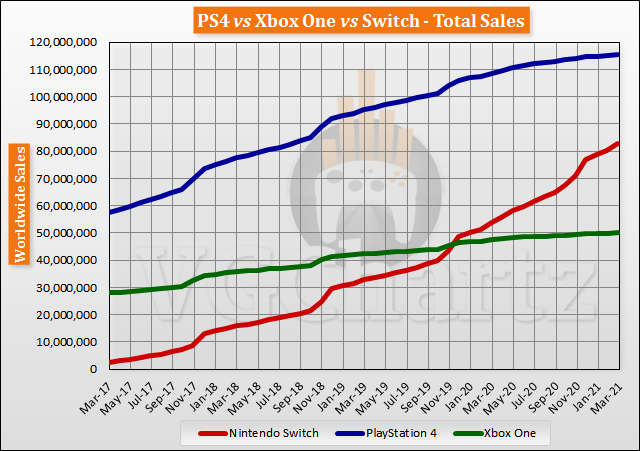 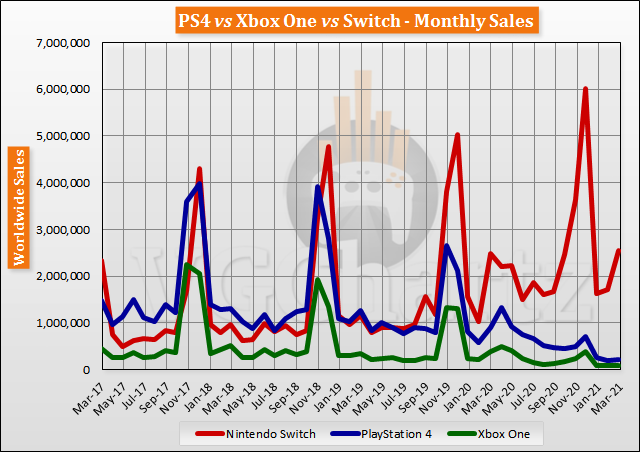 Looking at the marketshare, the Switch managed to achieve 89.4 percent of the monthly sales. The PlayStation 4 accounted for 7.3 percent of the consoles sold, and the Xbox One 3.3 percent.

I'm not even sure I want to know how well it will sell when some big titles finally get announced for this year...

Every year it's baseline was higher. Just crazy.

I wonder if the PS5 will catch the Switch with a baseline like that? The Switch should be able to maintain its high baseline in 2022 and will probably decline to 20 million in 2023.

The minimum I see the Switch end up at is 135 million and it has a good chance of selling up to or even over 160 million units. I don't see the PS5 ever reaching 130 million.

At the end of next year, the Switch will overtake the Ps4

Probably before that. Mid 2022. Should only be 12 million or so away by the end of this year.

I keep expecting Switch do go on a downward trend but it keep increasing. We really thought 2019 was going to be the peak at one point, hilarious

Literally most people, sales were down Jan 2020 from the year before and feb too i think. Y'all scams for liking this lol

Yeah haha, most people use to say 2019 would be Switch best Year. But he is right about total sales.