Like listening to a seashell’s rhythmic chant of the ocean, Call of the Sea's background story resembles something you've heard before.  A few seasoned developers venture to lands unknown to form their own studio: Out of the Blue Games.  Given how often this was case during the 8th generation, I initially figured this freshmen team would stick with a first-person walking sim (or ‘narrative adventure’).  Though its financial map was fraught with warnings, the red X actually pointed towards making a substantial puzzle game.  As a result, this untested team surprised me with its finesse in deftly balancing engaging brainteasers and succinct storytelling.

The year is 1934.  Norah Everhart, a married woman who suffers from a mysterious disease, takes it upon herself to find out what happened to Harry, her missing husband, and his expedition team.  The promise of a cure to Norah's disease lay 74 miles east of Tahiti on a remote island.  It's been months since his departure and Harry hasn't maintained a correspondence.  The legends whispered by worried sailors and locals lend this tropical paradise a dark metaphysical aura.  Do the fables hold any weight though?  If so, then why does Norah feel beckoned by it? 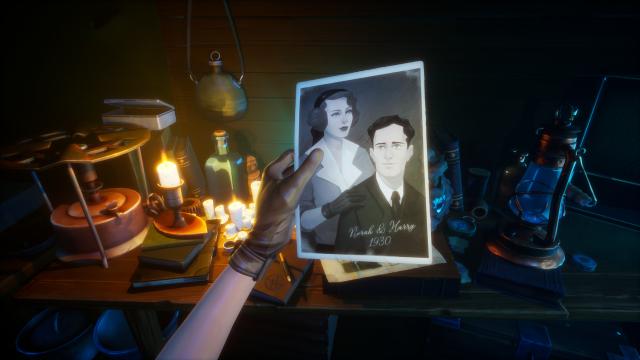 One of Call's greatest successes is how comfortably paced the narrative feels.  Its Lovecraftian impressions are carefully at the forefront, with an incipient dream sequence, and those intentions are subtly built up as time goes on; at the same time, this doesn't overwhelm detective Norah's investigation of her husband's team.  Each successive chapter - prologue and epilogue included - has a clear visual and contextual atmosphere for players to understand about either this special place or its recent visitors.  It's compounded in a piecemeal way like any good novella found at a library.

The next exemplary element - possibly the best - is the voice performances selling this story.  If I could kidnap five Brits ignorant of who Cissy Jones is I wonder if any of them could tell she's an American actress.  "She's this... uh... young British girl channeling that upper-class, early 20th century accent for the role," I'd say.  "Yeah, that souns' 'bout right."  Not just content in hiring a good acting coach, Jones also harnesses so much texture for critical beats too.  Hands down it's one of the best, if not THE best, performances of the year.  Though limited in air time, Yuri Lowenthal (Marvel’s Spider-Man series) as Harry is also up to the task.  Even sparse audio diaries with Harry's native guide, Teaharoa, audibly struggling with some English words highlights the focus everyone had in nailing their roles.

Though sparse and limited in impact, Call's faults don’t go unnoticed.  As buttery smooth as Cissy Jones is, instances of overly expositive dialogue jut out from the rest of the script to a comical extent.  "Oh my!  Another bad dream?  Even with the sleeping pills Harry gave me before going to this remote island he'd heard about that's 74 miles off the coast of Tahiti and is said to be cursed, I...."  That’s a hyperbolic paraphrasing, but it's not that far off either.  Overwrought exposition also creeps into the final revelation about Norah's place within the world and her husband's fate, feeling discordant from the rest of its steady buildup. 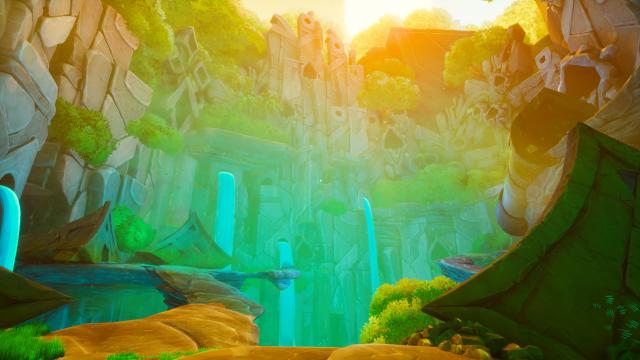 Like Norah's pock-marked hands, these embellishments temporarily distract from what's otherwise a beautiful package as far as game narratives are concerned.  The way it subverts expectations with Lovecraftian staples to tell a touching love story deserves a heap of credit; further, how it presents that narrative is carefully handled as well.  The archeological rummaging a la Gone Home keeps you invested with the crew's journey whilst Norah comes to her own realizations all the while.

Connected to Call's story pacing is the punctilious puzzle design.  As stated, I initially came in expecting more of a breezy walking sim.  To my surprise, there's both less and... more than what I expected from a self-designated puzzle adventure.  Puzzle-solving requires a lot of time, but it naturally blends with storytelling to the point you forget you're working out the next conundrum.  Since archaeology plays a critical role to the main characters, its tangible importance is rehearsed through gameplay whenever Norah jots down anything important in her notebook.  Sometimes your thorough examinations of the world are solely about backstory and elucidating Norah's mental state, while other times they're part of a solution; and the level design goes to great lengths supplementing the two.

Puzzles are also enjoyable because of how they maintain a balance between unstressful and challenging.  Each chapter is typically broken up between central and intermediate problems.  While rummaging through Harry’s old campsites, perhaps a bauble or micro-puzzle pops up that turns out to be a component for something larger; you’re doing your preliminary schoolwork to prime for the test.  But it also eases off in not making everything feel like one big puzzle room.  Sure, having successive ones build one after the other isn't the 'wrong' approach altogether.  But since Call is straddling that line between gameplay and immersive storytelling, this ideal keeps the world from feeling too artificial; plus, it ensures the variety sticks with you. 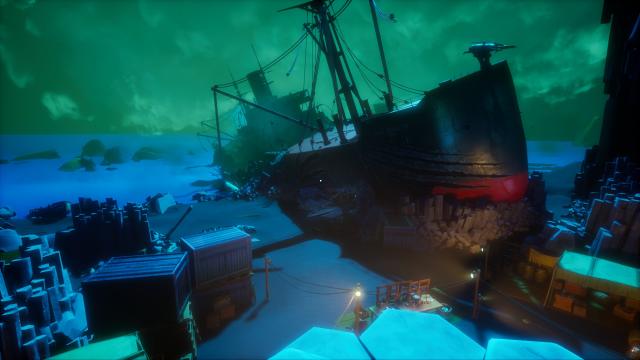 A select few of these obstacles feel challenging thanks to their obtuseness though.  There are times when the demand to scour around the bigger levels to find one specific hint makes you unjustifiably question your intelligence.  Of course, there's something to be said about dedicated investigative work in a puzzle game.  But the few that accentuate the need to walk far and wide for critical info make you wonder if the designers were coerced to pad the runtime.  Norah's diary aside, it's also shocking how infrequently vocally-stated hints are utilized – especially when it affords Cissy Jones more lines.  These infrequent speed bumps aren't destructive to forward momentum, but do blunt my solemn appreciation of its humble smorgasbord of creative brainteasers.

As one's come to expect, a small team of veteran developers with quality tools can craft breathtaking vistas in 2020.  Aping the 1930s era, the adventure serial aesthetic can be impressively colorful, almost dreamlike, in its depiction of an idyllic South Pacific island.  Stepping onto untainted beaches, you're quickly greeted with dozens of macaws cawing and flying overhead.  Between the visual composition and sound design, the world feels like a tropical rainforest barely touched by human invaders.  There's also a part of me that's… not wholly impressed either.  When the forested levels give way to basalt columns and cave networks, there seems to be a drop down in quality – in technical chops and artistic direction.  It's not quite reaching the level of end-of-year nominations for me, but nonetheless a solid effort that deserves due credit.

Keeping with the trend of "good enough," sound design nails the fundamentals quite well.  Considering how often otherworldly resonance plays a part in Lovecraft fiction, seeing that incorporated into several puzzles was a nice touch.  Eduardo de la Iglesia's emphasis on woodwind instruments makes sense for this seemingly-tranquil island too.  His compositions don't stray into daring territory from what I recall, but it's an adequate composition nonetheless. 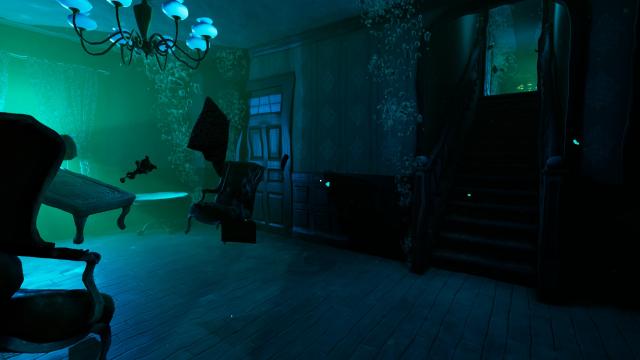 This tempered appreciation is through the lens of someone who played Call relatively close to launch.  Technical annoyances like texture pop-in for foliage was a bit too common for my liking; the same could be said for odd visual glitches most predominantly within the caves.  The game also froze up on me twice while climbing ladders.  Resetting quickly brought me back (played on Xbox Series X), but I did notice these rougher edges came about when I wanted to get somewhere as fast as I could.  Although I haven’t put in the extra time since completing it (before Christmas), I wouldn’t be surprised if one substantial update is right around the corner to minimize these issues.

Value is a relatively simple estimation.  It's another game in the long list of lower-priced independent games that's currently on Game Pass and going for $20 retail.  If looking to purchase: expect a six hour campaign that's bumped up a little bit if doing a completionist run.  Even if that time is supplemented by some obtuse puzzles and Norah's languid walk/run speed, it still feels like one complete journey. 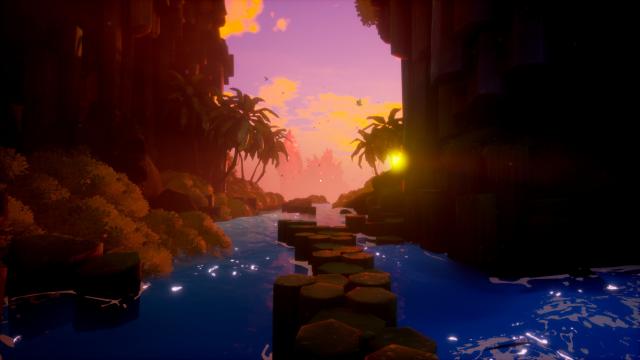 Apropos of the name, Out of the Blue swiftly releases its first title in early December and winds up surprising me.  Rather than following that small trench in the sand made by walking sims before it, Call of the Sea has a greater interest in balancing immersive storytelling and challenging puzzles than I anticipated.  It doesn't always succeed in these respects - occasionally to the point of frustration - but this developer's debut voyage is a damn good time.

I was also pleasantly surprised by this game, as I too expected more of a walking sim. When the game started leaning into logic puzzles I was very happy :)