"Since their brand new adventure released with Xbox Game Pass and on Xbox One, Windows 10 and Steam on August 20, the development team at Dlala Studios and Rare have been keeping a close eye on responses to the game," said Paul Collins. "It's been wonderful to see the positive reception from so many players and journalists, celebrating how the game stays true to form in its multi-genre, couch co-op nature, all wrapped up in that Saturday morning cartoon styling.

"The team have loved seeing so many people enjoy the nostalgia trip and share the experience with others, and had an absolute blast watching creators share experiences with their communities too. And to those who've completed the game on 'Battletoads' difficulty and even picked up the full 1000 gamerscore – congrats!"

View the official accolades trailer below:

Rash has been the most played of the three Toads. Players have died over 80,037,506 times, more than half of which were when riding a turbo bike. Players have revived their teammates 2,880,267 times and picked up 8,677,560 collectibles. The fastest time to complete the game was 1:38:51 by Fuxxyness using Game Pass for PC. 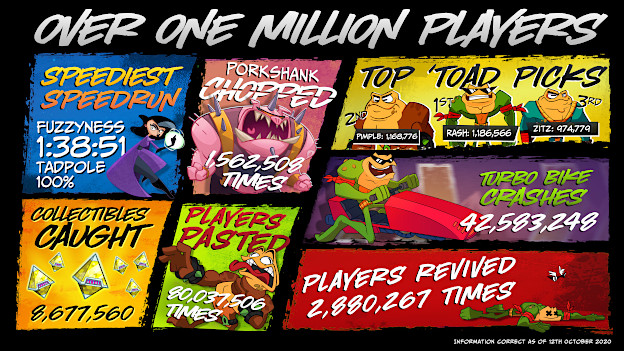 The wait is over! Rash, Zitz, and Pimple are returning at last to smash-hit their way through an all-new action-packed adventure of choreographed chaos, and couch co-op may never be the same again.

One to three players will take control of the Battletoads and team up to storm through wild and unpredictable stages with only one rule – expect the unexpected. Teamwork makes the dream work in a drop-in, drop-out gameplay blast, filled with over-the-top gameplay moments that anyone can enjoy, but only a True ‘Toad’ can master.

With a unique hand-animated cartoon style and packed with memorable characters and locations, the Battletoads are back for a larger-than-life brawl across the universe that promises to be fun alone, and unforgettable together.

Battletoads is available now for the Xbox One, Xbox Game Pass for Console and PC, and PC via Steam.

The Battletoad series were never sellers, this however might warrant a sequel, fingers crossed.

It served its purpose. Was a good time playing once. Bought or though Game Pass a budget game got a considerable amount of attention.

Ain't too shabby for a long-dormant IP. Although I would like a bigger-budgeted sequel from Dlala, I get the feeling MS's assessment of the sales is going to play a big part in that.