In the middle of September, a surprise release for the Nintendo Switch was the Microsoft published game Ori and the Will of the Wisps. It launched for the hybrid console on September 17 via the eShop for $29.99. It first launched for the Xbox One and PC via Steam and the Microsoft Store on March 11. The first game in the Ori series, Ori and the Blind Forest: Definitive Edition, also saw a release on the Switch in September 2019.

Ori and the Blind Forest: Definitive Edition and Ori and the Will of the Wisps will be getting a physical release on the Nintendo Switch on December 8. Each game will cost $39.99 and include a digital soundtrack and six art cards. 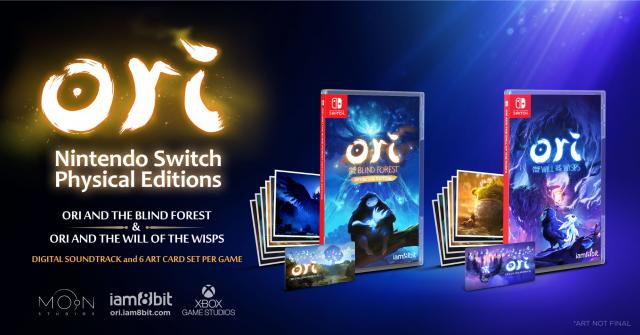 Here is an overview of Ori and the Blind Forest: Definitive Edition:

The forest of Nibel is dying. After a powerful storm sets a series of devastating events in motion, Ori must journey to find courage and confront a dark nemesis to save the forest of Nibel. Ori and the Blind Forest tells the tale of a young orphan destined for heroics, through a visually stunning Action-Platformer crafted by Moon Studios. Featuring hand-painted artwork, meticulously animated character performance, a fully orchestrated score and dozens of new features in the Definitive Edition, Ori and the Blind Forest explores a deeply emotional story about love and sacrifice, and the hope that exists in us all.

Here is an overview of Ori and the Will of the Wisps:

From the creators of Ori and the Blind Forest comes the highly-anticipated sequel, Ori and the Will of the Wisps. Embark on an all-new adventure in a vast and exotic world where you’ll encounter towering enemies and challenging puzzles on your quest to discover Ori’s true destiny.

Immerse yourself in a hand-crafted narrative experience with deeply emotional storytelling, strikingly beautiful environments, and a stunning soundtrack.

Face larger-than-life bosses and seek help from an expansive cast of new characters who will help you uncover Ori’s mysterious fate.

Race to the top of the leaderboards in the all-new Spirit Trials mode where players dash, burrow, grapple, and leap to high scores in unique speed-run challenges throughout the game.

Get on it. An amazing game series that belongs in any serious collection regardless of platform.