It had been a quarter-century since any new Battletoads game had graced a screen, be it TV or arcade cabinet.  This dormancy resulted in... fascinating waves of stardom: retro-focused YouTube channels examining its insane difficulty & recording prank calls asking if they had it in stock (to hilarious results) being among the most famous examples.  This nebulous internet fame only elicited enough monetary investment from Microsoft to contract out small-time Dlala Studios (Overruled!) to head development. But while suspicious info & underwhelming marketing subtly primed fans for disappointment, this reboot/sequel has become one of 2020’s best surprises.

The famed trio Zitz, Pimple, and Rash are just minding their own business fighting bad guys when they realize a terrible truth: they're irrelevant!  Yes, their real-world obscurity (relatively speaking) plays a big part of the meta-humor & stakes propelling Battletoads’ story forward.  Unenthused with a 9-to-5 lifestyle and a dingy apartment, the Battletoads decide to find and fight their arch-nemesis, The Dark Queen, in a bid to reach super-stardom once again.

The most intriguing quality to Battletoads is the way it manages story pacing & humor through various gameplay systems.  Just as I initially became aware of this series through the original's infamous turbo bike segment, the beat-em-up's main course had some supplementary appetizers to sell its oddball world.  Dlala Studios has gone even further by essentially making a 'kitchen sink' genre rather than a pure beat-em-up: bullet-hell shoot-em-up, breezy platforming, turbo bike segments, and a plethora of different mini-games are included for good measure.  Yet this cavalcade of disparate mechanics never felt as though Dlala got overwhelmed in juggling them; through and through, their intentions never struck me as haphazardly considered.

Even if the beat-em-up sections only comprise two-fifths (or less) of the overall runtime, they're no slouch compared to recent competitors.  The breadth of moves is easy to follow for the face buttons: light, heavy/launch, guard-break/stun, and jump are all designated where you'd expect.  Where the modest surprise comes in is with the ancillary mechanics built around that core template, all of which are well-incorporated by the controller layout.  In single player mode (my total experience), three d-pad directions are for instantaneous character swapping while dealing some damage; on top of this, a simple press of LT with an appropriate face button opens up possibilities like tongue grapples or gum spits (2 max per character), which temporarily lock an enemy in place.  When you take these along with evasive dash cancels, aerial combos, taunts, and fleshed-out combos, you can see core principles from other fighting greats transplanted here.

These mechanics are supplemented by careful consideration of enemy placement & level design.  As the arenas get larger and the combatants more copious in number, there's a combative juggling act in play when considering who deserves your focus.  Whether dealing with healers, ranged, basic, charging tanks, or specials, familiarizing yourself with their rulesets and routines is part of what makes the gameplay feel so dynamic.  Upon learning I couldn't tongue-grapple one of the most annoying enemy classes I had to reconsider everything about my positioning to get my licks in.  You could say there's a type of 'battle chess' that develops over time to reach that beloved S ranking. 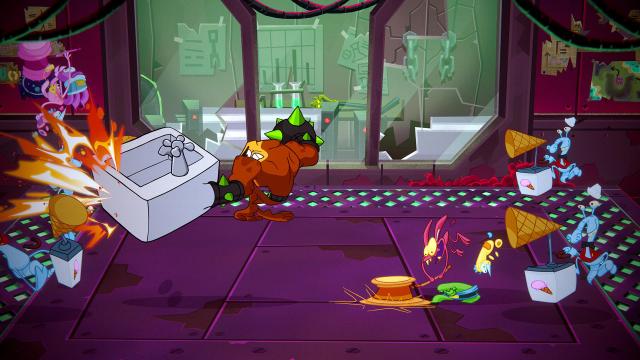 Fighting is further helped by the great sensation when landing punches.  One of the Battletoads' niftiest features are their bodies' transformative abilities.  Simple stuff like their feet or fists getting thrice as large is one thing, but doesn’t compare to Pimple turning into a freight train when executing a charged guard-break.  The amount of wildly inventive touches each toad gets are refreshing and harmonize with their personalities.  Older fans could bring up how the toned-down level of violence compared to Battletoads Arcade leads to a bit less satisfaction, but the visual & sound design when hitting combos is still substantial.

Enticing as Battletoads may be, it's not without a few warts.  As much as I enjoyed the 'foreground fighting' as the complexity grew and grew, you'll have occasional bouts further away from the screen on occasion.  Latching onto "tongue rings" brings you to what's effectively the 2D background, typically meant for casual traversal.  Considering their greater linearity, it seems like Dlala didn't know how to manage these supplementary fights.  The hang time for launched opponents that fly off-screen is also tough to gauge, making juggling slightly less enjoyable.  Finally, the final boss tips towards being unfair rather than very difficult.

All this talk and I've only touched on the crème-de-la-crème of the gameplay!  Despite having a few complaints with other gameplay systems, the sheer variety and creativity is something else.  Even the Toads' variant of “Rock, Paper, Scissors!” works as both a humorous visual gag and a short respite from previous beat-em-up segments.  That sort of gameplay pacing is peppered throughout too.  My first SHMUP section was so taxing and visually overwhelming that the subsequent platforming segment for "greater enlightenment" was the exact contrast I needed. 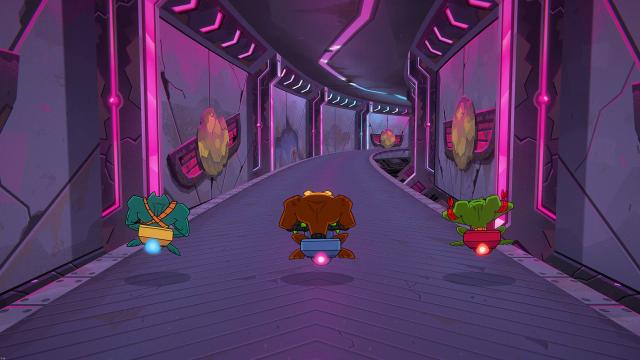 Turbo bikes make their return as well.  The camera has shifted from an isometric view to behind your character's back.  Its runtime hits that note of feeling like a substantial, challenging distraction but with enough checkpoints so as to not feel unfair.  Like with fighting in single player, a fail state with Rash just means you keep going with Zitz and Pimple.  Even the aural design when you crash nails that perfect middle between impactful and comical.  Like with the few SHMUP segments, the challenge feels well-suited for its intention and your success feels earned.

If there's one gripe for a level it'd be the sleigh-riding.  In a way, it's almost like it apes the maniacal difficulty of the original's bike section.  Here your only options are jumping, holding 'X' for ice platforms, 'Y' on sponge platforms, and 'B' for carpet platforms.  Failure to hold the correct button results in plummeting to your death.  Despite modest checkpoints, some of the split-second timing and button-dexterity demands near the end almost broke me.  I'm ill-equipped at handling parts that suggest you can't succeed on skill alone but need prior knowledge from consecutive deaths.

In sum, the cavalcade of gameplay mechanics on offer gives Battletoads a unique impression from this current swelling of beat-em-ups.  This variety isn't done because the core can't manage on its own; instead, it feels like respect being given to the source material.  A part of me wishes for more gameplay too, but it's tough to gauge whether that's a fault in this instance.  A game leaving you wanting more shouldn't inherently be considered a failure; considering its score-attack template to achieve better rankings, higher difficulties, and co-op (currently local-only), there are ample ways to continue testing your abilities. 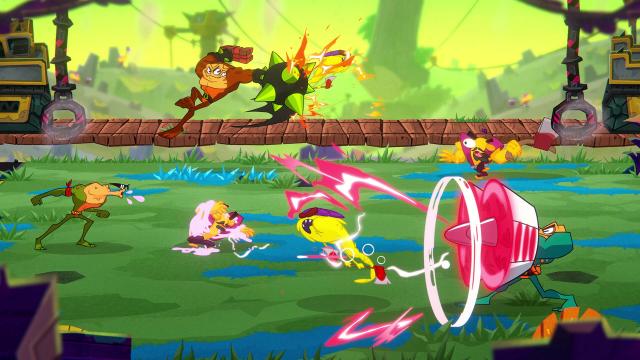 As successful as most of these different templates are, the chief complaint you find on Battletoads is what seem like lackluster graphics—especially in its debut trailer.  And while I'm split about specific visual aspects, to take what appears to be umbrage with it for being a budget title seems unfair.  No, it doesn't reach the technical expertise of Cuphead's Rubber House animation trickery, nor reach the fluidity of Streets of Rage 4; however, I still came away unphased in enjoying its simplicity.  What I'm more critical of is the uneven quality between gameplay (running on Unity Engine) and cutscenes that look like a modest production you'd find on Newgrounds way back when.

This uneven appreciation is buttressed by a bright, slimy art style.  In keeping with the original's artistic foundation, the gaudy alien backdrops and ludicrous aliens really nail the weekend-cartoon copycat vibe found during the mascot era.  The more... unexpected aesthetic choices are also a necessity considering any green or brown blending can visually confuse the audience of their character’s placement.  The, shall we say, less-exotic dress choice for The Dark Queen is something of a given in today's age; that said, I figured we were past signing off on Rob Liefeld's trademarked body proportions.  This and a couple generic monster designs aside, the majority of Dlala's character & environment nuances capture the type of off-brand personality the series exuded long ago.

"Personality" is one word to attribute to the oddball story as well.  The amphibious trio hop off each other really well; Rash's quest to be famous again, Zitz's forceful leadership attitude, and Pimple's sensitivity presents a nice dynamic and reaches a satisfying conclusion.  Writers Tom Kauffman (Rick & Morty), Kelsy Abbott, and Wayne Randolph approached the source material with a good amount of meta-humor regarding the Toads' potentially familial bond, their has-been status in the eyes of Rare today, and so on.  And the way in which Dlala incorporates many screwball moments through interactivity made me appreciate those bits all the more. 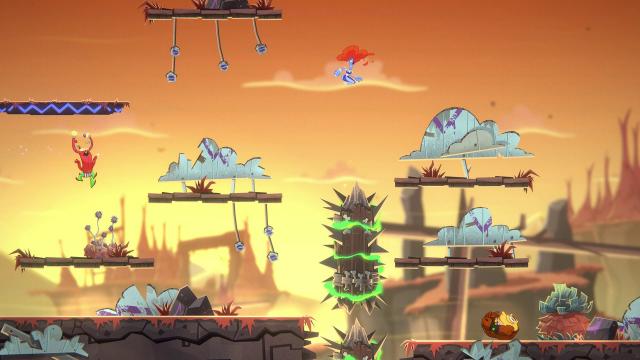 The story is also helped by good presentation.  Despite the cutscenes looking cheap, I still admire the solid direction managed with specific visual gags.  There’s a clear knowledge of animation storyboards behind the camera, getting the most out of the dialogue.  The voice actors for each Toad and The Dark Queen are surprisingly good too.  I'd sign those four in heartbeat should Microsoft decide to fund another ill-conceived animated show.

Sometimes the humor just stumbles into boring PG-esque crassness or confusing territory.  I'm not sure where they were going with the lispy deities who suggest being a gay couple.  Perhaps that's a current cartoon trope carried over?  Regardless, the duds irk me but don't ruin an otherwise enjoyable romp that had me rooting for Toads n' Crew.  And when considering all of its interactive parts and the overarching story, I feel like Dlala stumbled into making a meta-game about themselves: traits from each Battletoad synthesized by the team in the hopes of reaching stardom sounds quite familiar.  Call that “reaching,” but I’m sticking to this likely-pseudo-intellectual analysis.

After slightly over four hours, these are my thoughts on the single player campaign.  As previously stated, the whole game can be played via couch co-op of up to three players.  Obvious dynamics throughout the whole game will be different, but I can't provide any personal experience here.  Since my playthrough was during my COVID-19 quarantine (post-symptoms but still contagious risk), I thought it'd be irresponsible to expect someone play next to me.  This is a personal anecdote, but I believe this highlights how great online co-op at launch—with a stable net code—would've been during these isolating times. 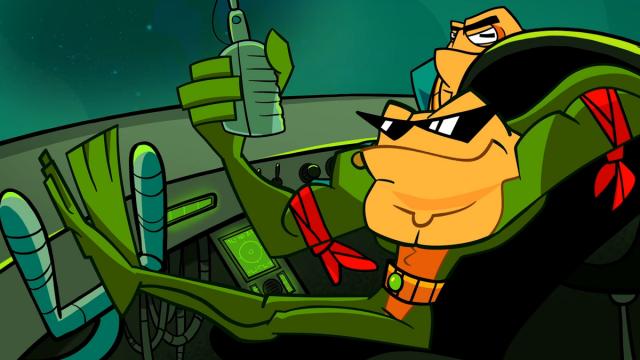 As an honest-but-hopeful doubter of the project upon first glance, I'm happy to report Battletoads is a really good game.  Being a couple warts shy of toadal greatness is something Dlala Studios should take pride in.  Despite making a 'gameplay homage' to the franchise, I also can't fault them for taking a different tonal direction than fans expected, especially when they went all-in on their bet.  It's easy to see budget constraints in respect to lacking online co-op at launch (in a Microsoft title?) and less graphical sophistication compared to contemporaries; and yet, the effervescent attitude towards its collection of enjoyable gameplay concepts and jokes make the ride worth it.

Really good review. The game is very fun, and have a good fundation for a sequel with better budget.

Surprisingly good, its also dirt cheap and on GamePass.