The first new game from Vanillaware since Dragon's Crown in 2013, 13 Sentinels Aegis Rim took no less than six years to be made available to the public. Despite day one sales that were under expectations, positive word of mouth for the game in Japan eventually resulted in shortages and even lifted the title in Famitsu's charts, which is a pretty rare occurrence for a PlayStation game. Proof enough that even in the realms of science-fiction and the strategy RPG genre Vanillaware's talent remains intact. 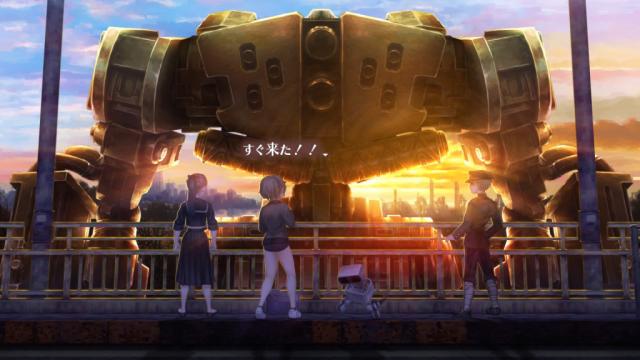 The plot of 13 Sentinels Aegis Rim is so massive that it's hard to decide where to begin... or indeed where it ends! As implied in the title, the player follows the fate of 13 teenagers faced with an invasion of giant machines in Tokyo, 1985. But these teens have their own giant robots, called Kihei, and stand on the frontline ready to preserve humanity. That's roughly what the prologue says, but it gets much, much more complicated than that. 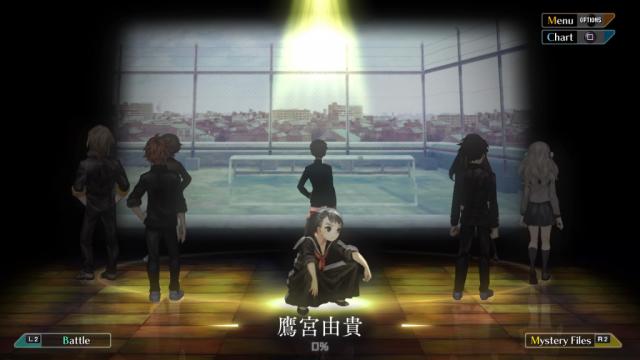 13 Sentinels Aegis Rim begins in Tokyo in 1985 but actually takes place across various different periods of time. You travel to earlier parts of the 20th century, as well as the distant future. Characters that appear aren't necessarily from the era on display, which results in memorable scenes like World War soldiers discovering the modern era, agents from the future coming back in time to fix human history, or the young people of 1985 being horrified to witness a robotic future where mankind has failed. Vanillaware's game boasts impressive writing, but also clever little easter eggs related to movies, like BJ the alien.

It's also an emotional rollercoaster, given the flow of plot twists, interrogations, and unexpected characters the game throws at you. 13 Sentinels has a truly breathtaking, deeply complex narrative that evokes science-fiction gems like Matrix and NieR Automata. Every era featured in the game is shrouded in mystery, with small clues to the truth being left here and there, ensuring you unravel the truth very gradually. The soundscape fully supports the apocalyptic atmosphere, with dark or symphonic tones, as well as top notch Japanese voice acting. The battle music, however, is much more discreet. 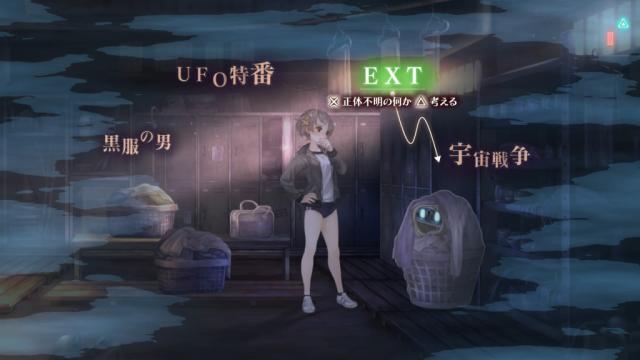 The game is split between a story mode and battle mode. In story mode, you follow the narrative from each character's point of view, while battle mode is a succession of pure tactical-RPG missions. Clearing battle mode stages is required in order to view later parts of the story. The first remarkable thing about Vanillaware's latest game is the freedom granted to the player in terms of progression. You can play the story aspect or combat aspect at any time, and flick freely between one and the other. In the story part of the game you can focus on the character you want as well, knowing that each has his or her own narrative and fate. Of course, they're all connected to each other, so you sometimes you'll have to catch up in another character's story to progress your chosen preferred characters narratives arc, but the game is mostly non-linear and it's very pleasant to be able to freely choose what you want to start with. 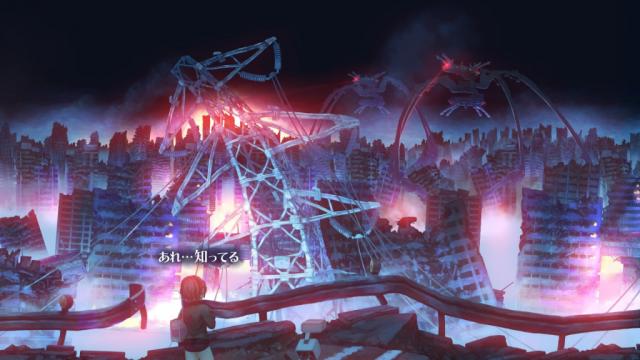 The story part has actual gameplay; the player moves the chosen character across 2D screens in which short scenes (usually a couple of minutes in length) take place. The goal is to unlock the next scene by finding keywords in conversations. It's a sort of mini puzzle within the giant narrative puzzle that is the 13 story trees. One scene can have three or four follow-ups, and there are a couple of alternate endings, so it's pretty enjoyable to complete everything. Visually speaking, Vanillaware has stuck to tradition with pretty 2D aesthetics that resemble hand drawn art, giving characters and backgrounds a unique look. 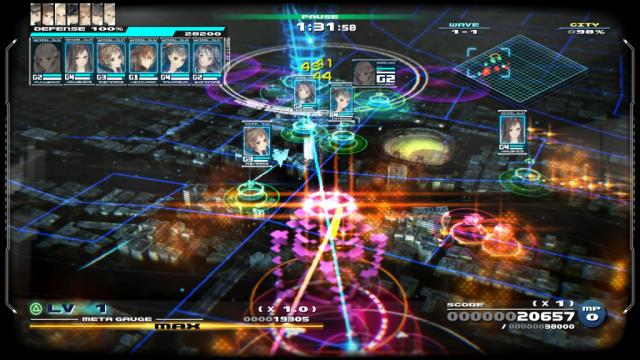 Talking of combat, that's probably the most questionable part of 13 Sentinels Aegis Rim. Vanillaware opted to use semi-real time tactical gameplay. You choose six characters from the thirteen (everyone is unlocked from the start) to repel waves of Deinos, which are strange animal-looking machines  intent on annihilating the city. The goal is to defend the central terminal for two minutes. It sounds short and one dimensional put that way, but it can actually become quite intense because time is frozen with each character's turn, allowing you to think through and decide your next move. However, between each turn dozens of enemies continuously advance towards you, and countless missiles rain over your base, so you can't just turtle in your base, especially in hard mode, where opponents have a lot more HP. Your own mechas take damage pretty quickly, and even one character dead means immediate defeat, so you really have to be smart and mobile in battle.

The big letdown of the combat mode is how bleak it looks. Your units are tiny triangles seen on a very simplified map, and enemy units are very abstract as well. It looks more like an outdated wargame than a modern strategy title. It can become difficult to spot your own characters in the middle of the fight, let alone identify which type of monster is attacking. Despite these flaws the gameplay remains fun and compelling. There are various generations of robots, each having a different speciality and tactical advantage - the first generation is strong at taking enemies head-on, the second one provides support by setting turrets and lures, the third excels at long range engagement, and the fourth and final generation boasts high mobility thanks to its flying units. 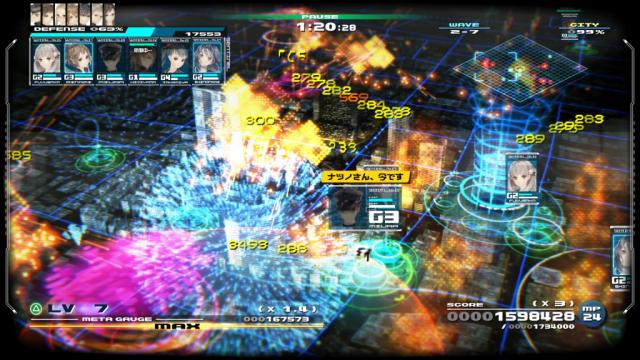 13 Sentinels Aegis Rim might not be especially pretty, but it's still a lot a fun to obliterate dozens of targets in a flurry of figures and colors on the screen. It's really a very original gameplay experience, but also diverse, because each mecha generation has quite extensive weaponry, with sometimes surprising effects. The railgun, for example, which fires a straight but ultra-powerful beam, is the dream-like tool to clear long roads. The third generation of robots (which includes the railgun) can also load a couple of insane long-range arms like the Hunter missile, which is so destructive that it consumes almost all of your EP. 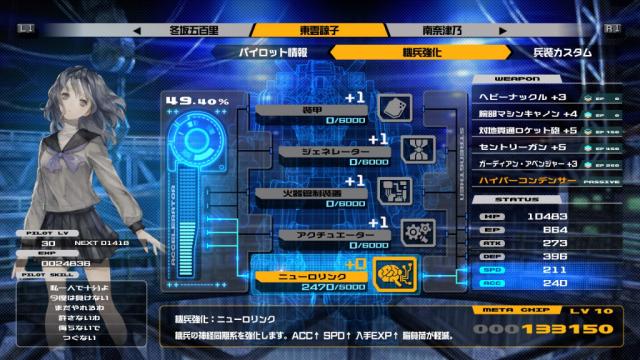 There's also a strong RPG component. As mentioned above, energy points are needed to fire special weapons, and units have HP like in any simulation RPG. You can improve those statistics, as well as attack, resistance, and speed stats by spending meta chips, which you gain in both adventure and battle modes. Meta chips also unlock further weapons and improve them. You also need them to acquire passive and unique skills that grant a speciality to each character. For example, Ryoko can set two turrets in one turn instead of one, once she has learned her unique skill. Finally, the central terminal you have to defend can also be strengthened, gaining more durability, being able to help your team in slowing down enemy progress, or simply repairing itself, which is by far my most preferred option.

Vanillaware delayed 13 Sentinels Aegis Rim for good reason and the end result is that the studio has built a new kind of tactical RPG, as well as a terrific narrative. This is frankly the best sci-fi story I've seen in a long time and the progression system is interesting too. 13 Sentinels Aegis Rim combines a truly amazing narrative, unique esthetics, and an addictive battle system to produce a one-of-a-kind experience that JRPG and visual novels fans alike should definitely enjoy.

Thanks for putting this on my radar. More reviews just started coming out and they're great. I have something to look forward to next week. 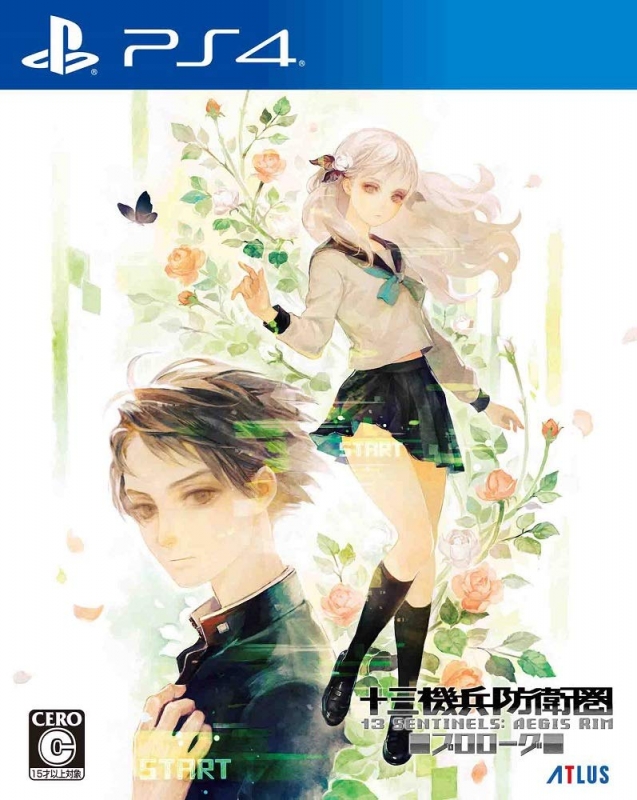