It would be remiss of me not to write about unique game design choices without mentioning arguably the most unique game designer of them all: Yoko Taro. The word “conventional” certainly has no place around him, and probably his most successful title to date, Nier Automata. While Automata has quite a few unique selling points, what perhaps makes it stand out among AAA games more than anything else is how it handles the relationships between its characters, and how it puts the player at the forefront of both feelings of accomplishment and loss. 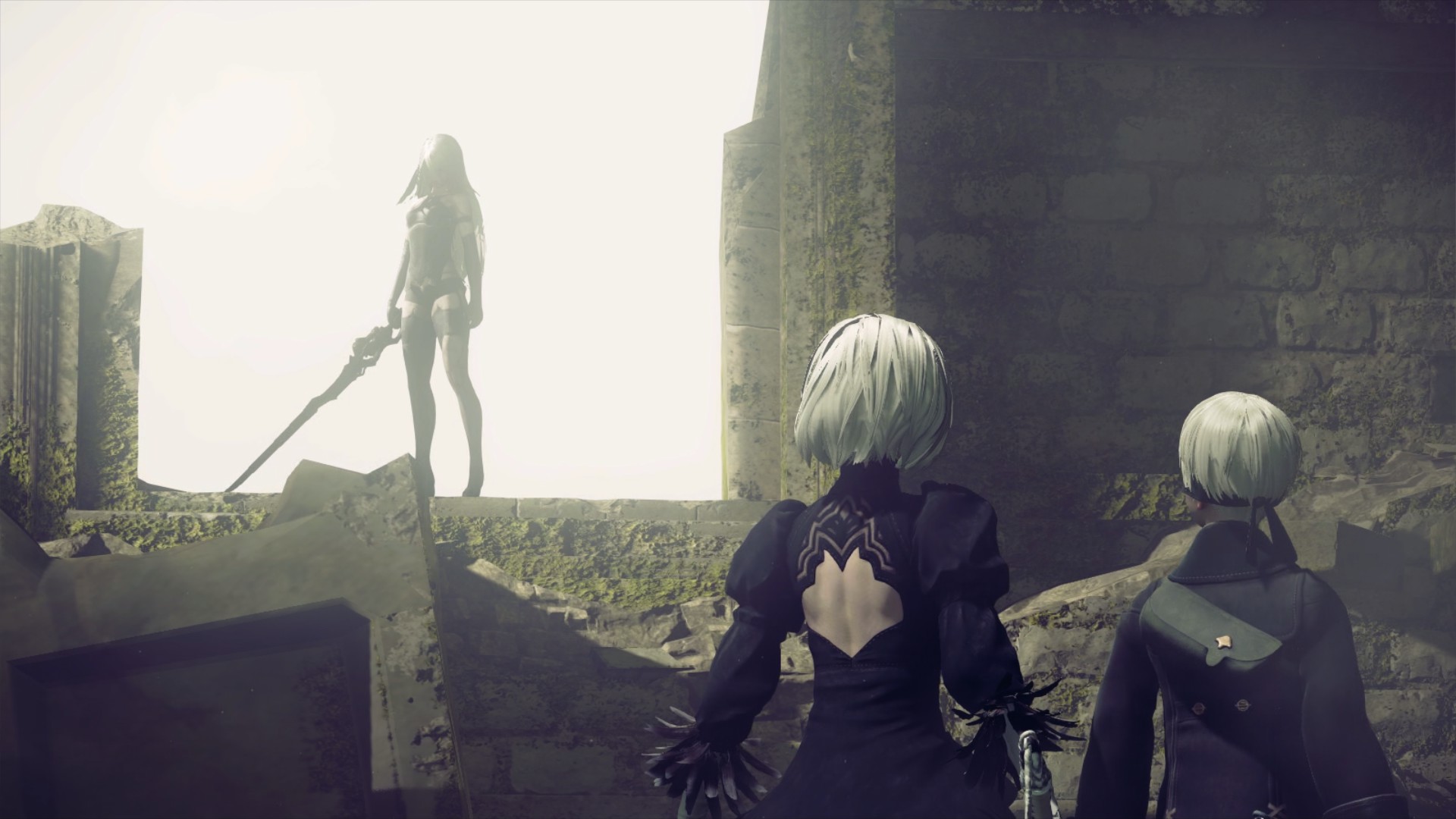 Many games embrace despair and hopelessness as themes, but few dig quite so deeply and manage to make those aspects as poignant as Automata, and the game’s method for doing so is simplistic and yet incredibly smart at the same time. For the most part, Automata focuses on a conflict between androids and machines on a post-apocalyptic humanless Earth. Androids were created by humans previously and carry many human-like traits (emotions, reasoning, conscience), while machines were created by a group of aliens and, in theory, should possess no human-like traits. The backstory is far more convoluted than that and ties back into the original Nier, but the important thing to know is the emotional distinction between androids and machines and the reason behind their conflict: they’ve both been ordered to defeat the other to carry out the wishes of their respective creators.

This is the set-up that Automata uses to build the player up. Androids and machines hate each other, and the game establishes this largely through its protagonists. 2B, the main character for the first third or so of the story, is untrusting of all machines, and 9S goes even further by being openly hostile. So when machines show up that begin to exhibit more human-like qualities, and even attempt to make peace with the androids, 2B and 9S have to confront their own prejudices and ask what separates themselves from machines. Eventually, they even find themselves needing to set aside their differences and work alongside machines. Throughout the story, players find themselves repeatedly confronted by machines who just want to co-exist peacefully; who are disillusioned with war and simply want to be friends.

By itself, this might just have been a heartwarming tale of overcoming initial prejudices and realizing that there’s more to each other than they were led to believe. But this is where Automata starts to twist the knife; now that the game has built its characters up, it begins to tear them down by taking away the things they cared about. I’ll dive into what specifically it does later on in a more spoiler-heavy discussion, but for now, know that after displaying this new alliance and a newly formed relationship with the machines as an example of opposing cultures setting aside their differences and working together, Automata starts to undermine that success story. The relationship that we, the player, put effort into fostering and caring about is taken away from us. 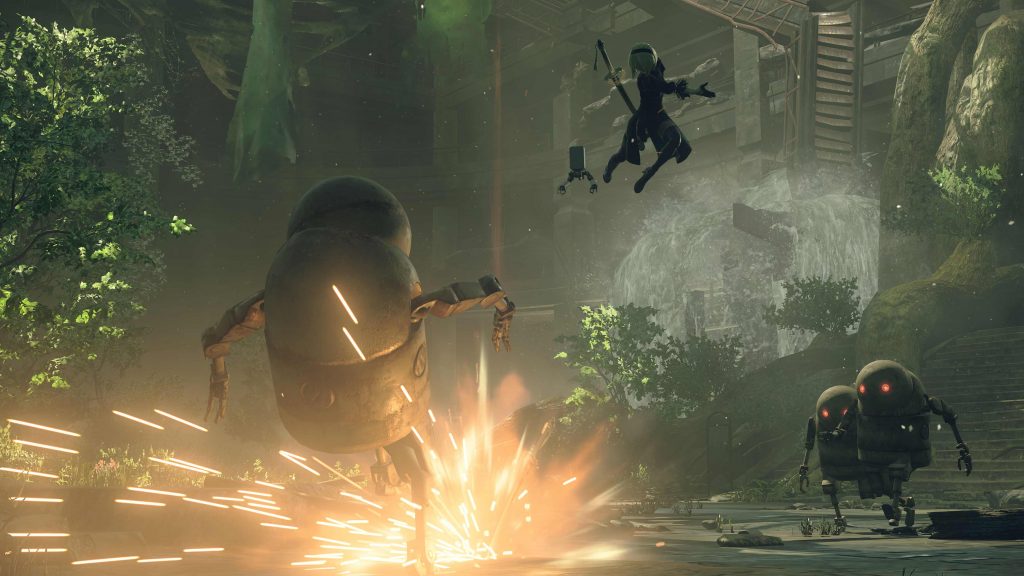 And I emphasize the word “player” there, because this is a game, after all, rather than just an extended movie. The “player” aspect of the relationship between androids and machines is the reason that undermining it proves to be so effective. These relationships aren’t something we’ve simply watched form; they’re ones that we’ve actively put time and effort into cultivating. The player is the one who’s helped defend the peaceful machines. The player is the one who’s been assisted by those same machines in carrying out their mission at various points. The player’s effort is what’s gone into forming this relationship and overcoming the barriers between machine and android.

This is why the game taking this away from us is so poignant. The protagonists of Automata become more nihilistic and hopeless as the game progresses because of what they have lost, and it’s something we as the player can relate to because we feel that ourselves. The relationships that we invested so much effort into building up are taken from us, and the sense of loss that the characters feel is the same one we feel because those relationships are ones we’ve helped form. Many games that attempt to create tragic protagonists that we can relate to miss this vital aspect. They display tragedy occurring in the character’s life, but don’t invest the player in the object or person that the character loses, and as a result, we don’t sympathize with them as much as we would if we had that investment. 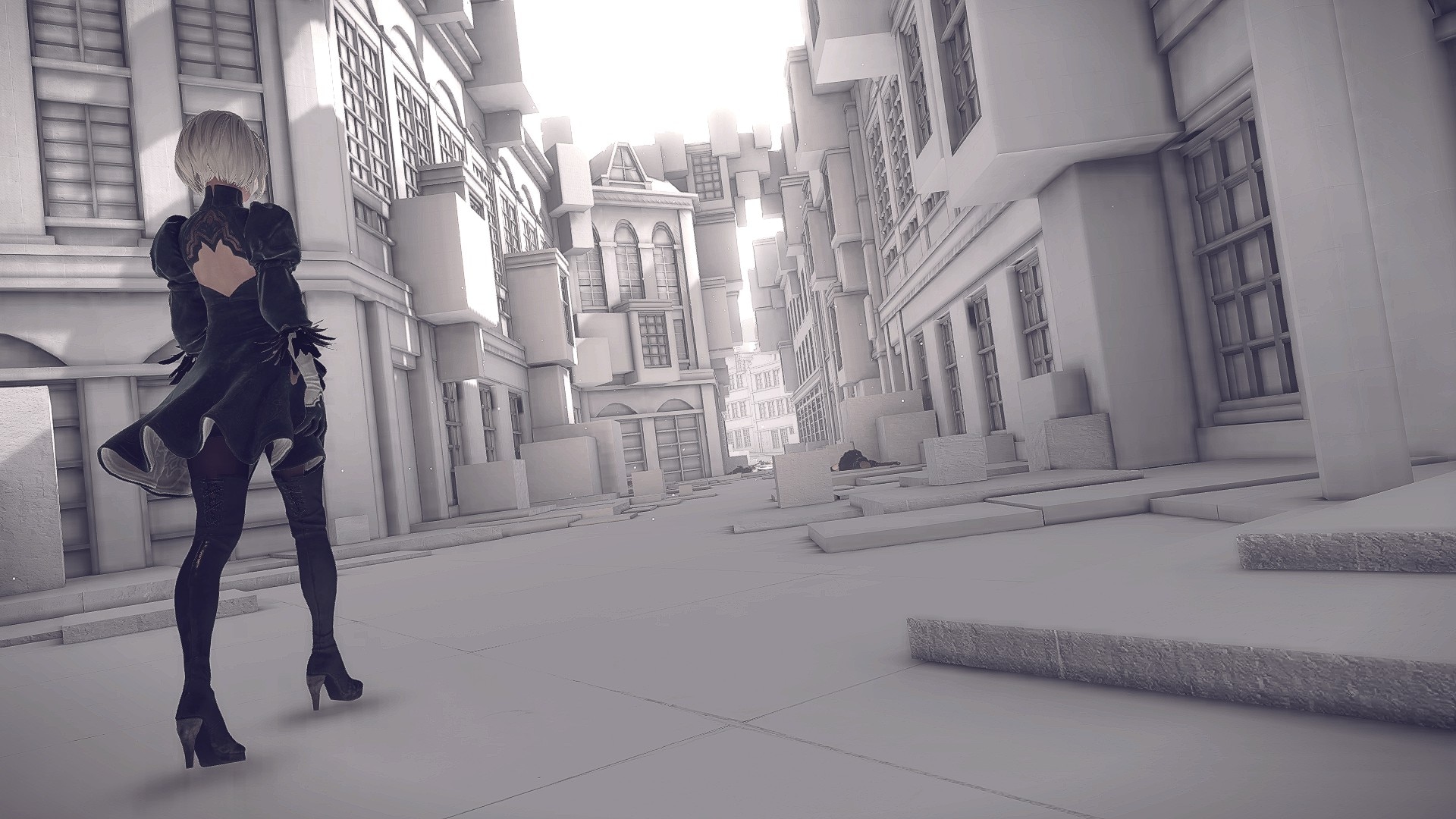 From this point onward, there will be specific story spoilers, so if you’re interested in playing the game and haven’t yet, it might be worth stopping here.

The entire concept of building up and tearing down is perhaps best exemplified in a machine named Pascal, who leads a village of pacifist machines and refuses to engage in any kind of conflict. 2B and 9S are initially suspicious of him, but grow to trust and rely upon Pascal as the game progresses. Pascal helps out the android camp by supplying them with parts, and the player comes to Pascal’s aid on several occasions. For the first two thirds of the story or so, it’s a charming story of individuals overcoming what they thought were their irreconcilable differences to create a better world.

If you’re familiar with Automata’s story, you know this doesn’t last. Due to story events, other machines go out of control and ultimately attack Pascal’s village, burning it to the ground and killing most of the inhabitants. Thanks to the efforts of the player, Pascal and a few other machines manage to survive. Pascal, the survivors, and the player flee to a remote location to try and hide, only to be attacked once again. In a last ditch effort to save the remaining members of the village, Pascal throws aside his pacifist ways and joins the player in beating back the assaulting machines. The relationship that we’ve built with his village is quickly becoming undone; not only has most of the village been lost, but now the very concept the village stood for - peace - is having to be sacrificed in order to preserve the lives of the survivors. 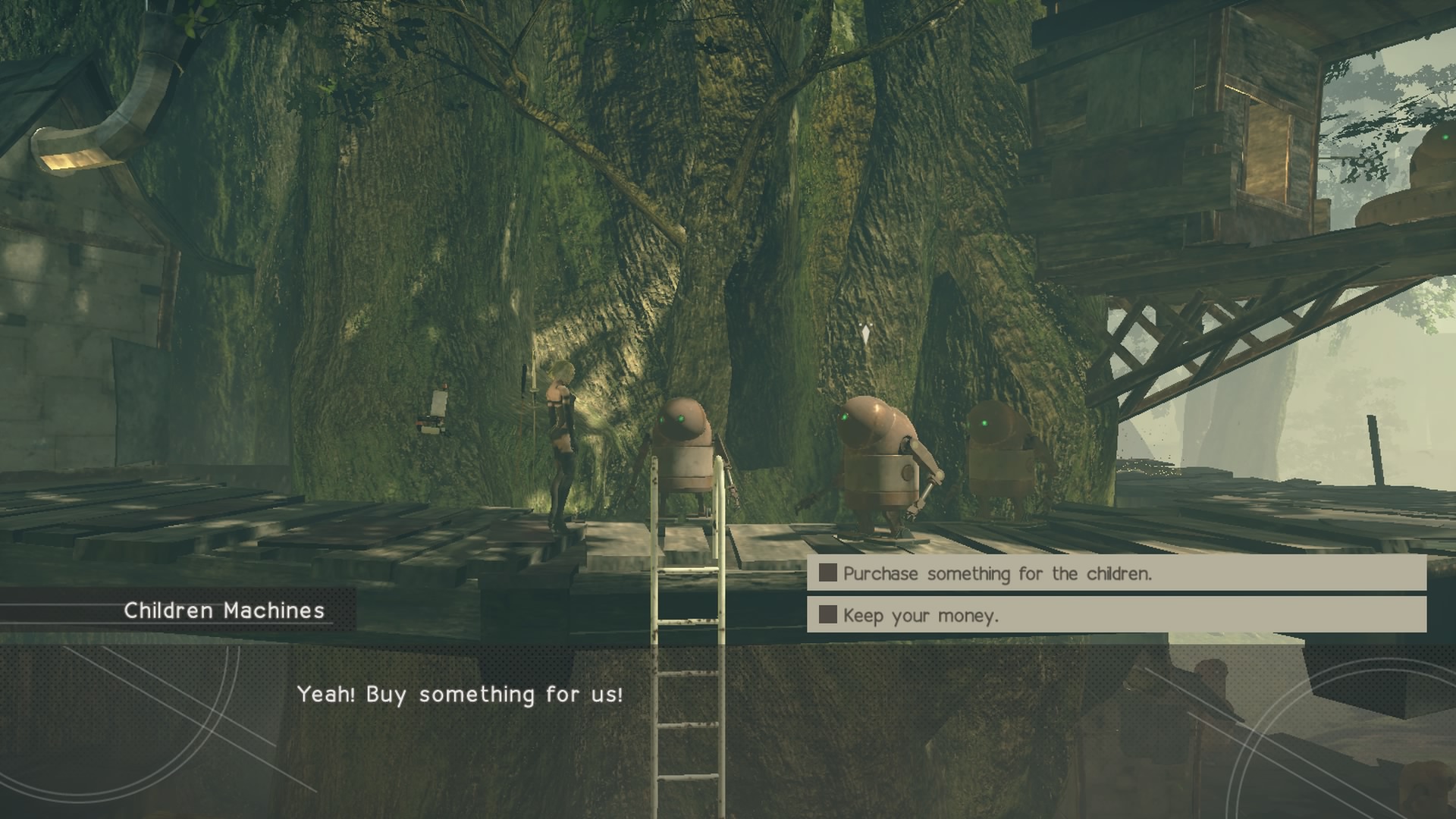 But it’s only after the player and Pascal repel the attackers that the real gut punch hits. Pascal taught the other machines concepts of emotions, in order to help them better understand androids and stay safe. One of these was fear, and only after the fight does it become clear how great of a mistake that was. The survivors, terrified of the attackers, all commit suicide in order to avoid what they feel is an inevitable, torturous death. Pascal’s realization that his own instruction, and part of what was intended to help bridge that gap between machine and android, was what destroyed the few survivors that remain, is too much to bear. It breaks him, and no longer wanting to continue living like this, he asks the player to either wipe his memory or kill him. The player is then presented with a choice; they can wipe his memory, kill him, or leave him be. Perhaps ironically, what seems to be the most merciful option - wiping his memory - is probably the cruellest. Pascal returns to the now abandoned village with no memory of who he was, selling machine scrap to passers-by to try and survive. Inspecting the parts he’s selling reveals that they’re the remains of his former villagers.

This is by no means the only “depressing” part of Automata, or maybe even the saddest. But it does, in my opinion, best exemplify the approach taken by the game to breaking its characters down, and by extension, its players as well. Everything the protagonists worked for and cared about is slowly taken from them, and they descend into depression and madness as a result. And because players are invested in these relationships and characters by means of gameplay, its impact is felt on us too. Having to kill Pascal, or watch him sell the parts of his own deceased villagers, is absolutely crushing. 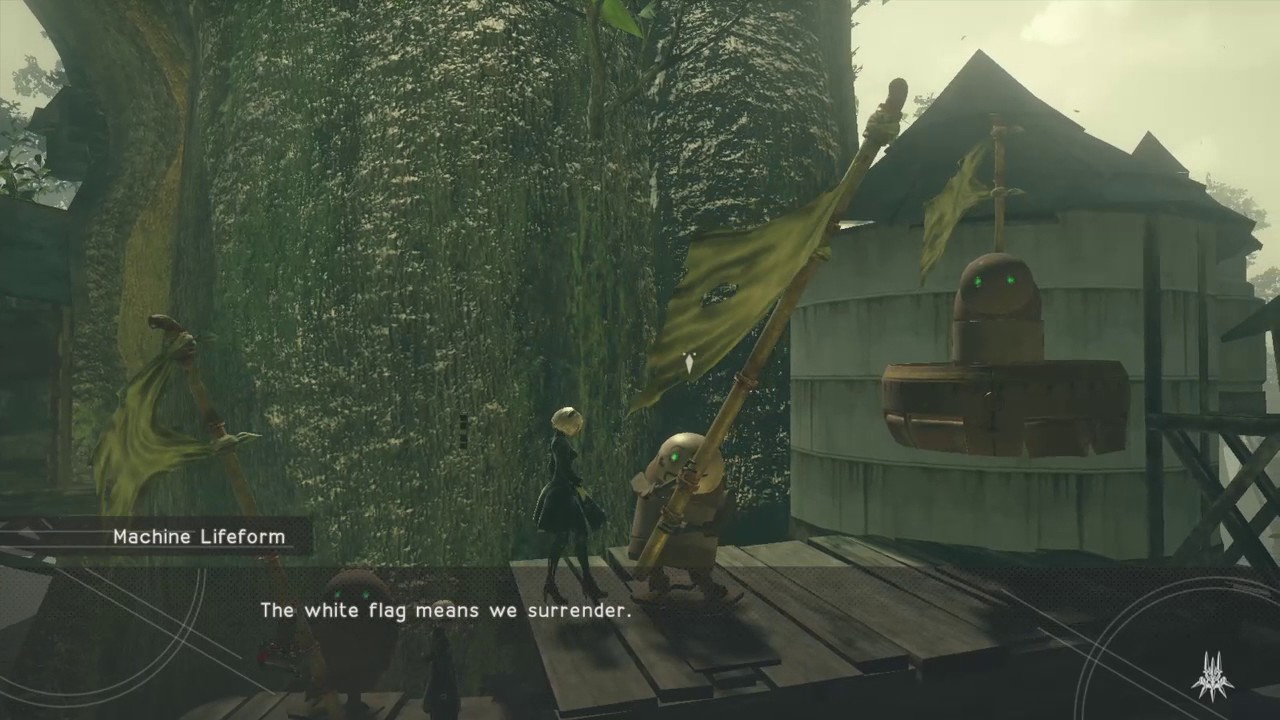 What can the game industry take away from Automata, however? Many games wrestle with themes of depression, nihilism, and characters who engage in morally questionable activities because of their broken emotional states. In their haste to touch on deep and complex themes, though, gameplay often gets left behind, serving merely as an afterthought; a vehicle to connect story moments and little more. Automata, conversely, shows how gameplay can be used to directly tie the player into these themes, by investing us in their actions; building us up only to tear us down later. As games continue to tell compelling stories surrounding these themes, I believe they would benefit from looking to Automata’s example and seeking to make gameplay a method of investing the player in the narrative, rather than just something that happens to coexist with gameplay.

Excellent article! That is all.

"Automata, conversely, shows how gameplay can be used to directly tie the player into these themes, by investing us in their actions; building us up only to tear us down later." And this is one of the biggest reasons why this became my favorite game not just of this gen but so far from everything i've played.