The game has already shot to the top of the best-selling games list on Steam as of the time of this writing. This is despite the Steam Summer Sales taking place and Horizon Zero Dawn Complete Edition being a full priced game at $49.99. 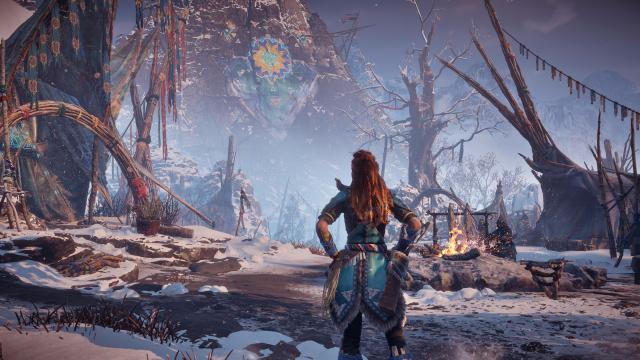 Earth is ours no more.

Experience Aloy’s entire legendary quest to unravel the mysteries of a world ruled by deadly Machines.

An outcast from her tribe, the young hunter fights to uncover her past, discover her destiny… and stop a catastrophic threat to the future.

Unleash devastating, tactical attacks against unique Machines and rival tribes as you explore an open wold teeming with wildlife and danger.

Horizon Zero Dawn first launched for the PlayStation 4 in February 2017, followed by the Complete Edition in December 2017.

I'd kill for Nintendo to release some of their games on PC.

I kinda agree with you here. Anything ten years old or older should have been released on PC by now. Nintendo is sitting on a gold mine of older games.

Nintendo will release on other platforms the same day they decide to follow Sega into the history books. In any case 10 year old games are starting to fall into the "Retro collector" category. You can pick up Will and GameCube fairly cheaply at the moment.

That will happen when Nintendo stops making hardware, which I hope it never does

@OneTime My dude Gamecube games are insanely expensive these days. Check out my recent thread on gamecube game prices.

I think it would be a good move for sony to release a lot of their older titles on PC. That way we don't have to wait for remasters or hold on to old consoles just to play some games.

Seems like a lot of Sony Playstation exclusives would benefit from a PC release. Take notice Sony.

Sea of Thieves and Halo MCC have also been hugely successful on Steam.

If they decide to put most of their games on PC shortly after release I'll probably not pick a PS5.

They would benefit from releasing on any platform as there are some great exclusive games. However, Sony has there own ecosystem which they want players to be active in.

Its never been a better time to be a PC gamer.

@Jabba89. Yes, exactly. Although what OTBWY says has merit, it's not nuanced. Sony has much more incentive than MS to, at the very least, significantly stagger PC releases, if not limit them outright. That this release is happening at all, shows savvy. Protecting their platform interests, while expanding to a new market, with minimal risk. It's worth noting that this is a massively inflated price from the very frequent sale price it's offered for on PSN. A luxury afforded to them by having a ( mostly ) new audience to sell to.

A lot of PS exclusives aren't on PSNow.

@coktoe for sure. And I would expect them to do it again with a staggered release, possibly with GOW. If they start porting too early though I would think it would have a negative impact.

I'd rather they do this then I don't have to buy a PS5, but I can see them doing this with their older titles for that double dip

Expected, it is a great game.

Great news. Hopefully this encourages Sony to release more of their older games on PC like Bloodborne, The Uncharted series, The last of us 1, the older god of war games etc

This is a sign that the money on the table is definitely viable to reach for. They've seen MS doing this, so it's natural that in time, they too would do what MS are doing. This means that if Sony were to make this a common occurrence, then Nintendo would again become the last member to another party.

Nintendo revolves over their IPs where Sony don't. And i'm not sure Sony will put their bigger franchises on PC like the last of us. Maybe they will, but i really don't think Nintendo will do that until they are in a bad position.

Sony does in fact with theirs. If they hadn't, they'd have more focus on third part over their first. Nintendo will continue to live in their own bubble, at least until they decide to follow another trend at the last minute.

Since when is Nintendo following trends.. they literally are the ones that are the most appart of others in the gaming industry. Playstation on the other hand..

DLC, online charging to play online, toys to life, to name a few.

Not sure how Nintendo are unique and ahead, when they are pretty much doing what the other two are doing. Only fanboys would be so blind to think otherwise.

That's great news. Definitely opens the door up for Sony to release more on PC

If Sony starts releasing most of their quality exclusives onto PC you can say goodbye to PS5 lifetime sales past 75 million. Oh well. My PS4 broke three separate times, and Sony doesn't offer anything beyond a one year warranty. I'd rather have hardware that I can actually fix myself. A.K.A. my gaming PC.

No. I'm sure most ps owners don't game on pc. And that they will make more money from pc revenue than those who game on pc console. I'm sure they did the math. But sony are smart, they won't release day one exclusives to pc. They might wait a year before they release enhanced editions. This is a win for pc gamers and console owners.

The revenue from PC sales can't compare to the lost revenue from selling fewer consoles. This is because consoles charge a royalty fee for 3rd parties to sell games on their system. How is this a win for console owners? They gain nothing from it, except for the weakening of the Playstation brand. Meanwhile PC gamers are charged insane prices for ancient games. Sony's current strategy isn't fair to either side, and they are digging their own grave, in the console business. Far fewer people will buy a PS console without exclusives.

Cerebralbore101 completely agree, personally i buy Consoles for the game library and exclusives are a big (although not the only) part that matters to me, and if this is the way Sony moves forward then honestly i will just stay on PC, because it just makes more sense... i would much rather wait 3 to 4 years for their exclusives on PC, than paying 400 dollars for a console on top of the PS+ yearly subscription that i need to play online.

Just with the money that i save from the yearly PS+ subscriptions i could upgrade my PC every 7 years as well... oh and ive been a PS fan my whole life since the PS1 (just in case someone thinks im trying to troll... im just being honest).

Hopefully Bloodborne in the near future.

a lot of down votes to my comment, alot of salty pc/console fanboys??

The best new IP of this gen, IMO.

Its a not my Game but it is good that no PC Gamer who wants to play it need to buy a Playstation only for theese game in future.

This is great news. As a console gamer, i'm happy for sony to succeed further and more first party titles to sell more. The pc vs console fanboyism is silly crazy.