On a system with an impressive library of shoot-em-ups, both old and new, Rigid Force Redux holds its own. An enhanced version of the horizontal shooter Rigid Force Alpha, which debuted on PC in 2018, Redux was redeveloped in Unity and features 60 FPS, difficulty balancing, and overhauled visuals, special effects, and user interface. Its forgettable music, generic graphics, and lack of multiplayer hold it back, but its arcade action, nuanced mechanics, exciting boss battles, and strong post-game content make it another solid shooter on Switch.

Unexpectedly — this is a shoot-em-up after all — Rigid Force Redux features a story, with pre-stage interludes and dialogue during the action. You're a pilot onboard an advanced spacecraft called Rigid Force Alpha sent to investigate a distress call originating at a research facility in the solar system. The inclusion of a story, alongside a chatty AI companion named PSYE, is a bonus on paper — especially considering the genre more often than not eschews narrative entirely — but in reality is adds very little to the experience. The story is safe and formulaic, and PSYE's exclamations during stages are a little distracting. You can turn off story and dialogue in the options menu without losing anything essential. 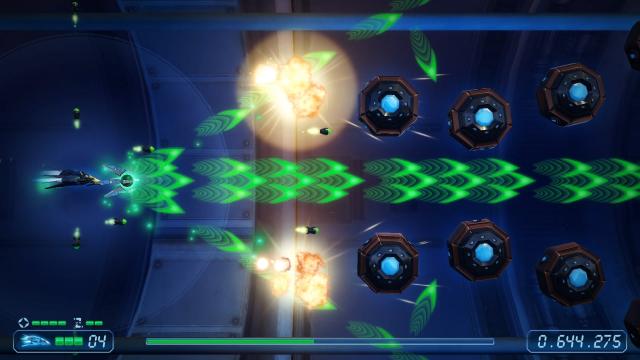 Story isn't the only thing formulaic about Rigid Force Redux. Graphics and audio also fall on the generic side. The game's 3D graphics provide a nice sense of depth, yes, but they have no special or distinctive features. They feel plain and ordinary. Similarly, the synthwave soundtrack by Dreamtime, while not at all deficient, is easy to forget. Since so much of the personality of a shoot-em-up comes from its art direction and music, this is a disappointment.

That said, Rigid Force Redux doesn't disappoint in two much more important areas: gameplay and value. On the gameplay front it excels thanks to several mechanical wrinkles that elevate it among other like-minded horizontally-scrolling shooters. At its simplest level, the game asks that players move with the left analog stick and fire with the B button. As you dive deeper into the game you'll collect three different weapons types — a rapid-fire blue laser, an orange spread-shot, and a green ricochet shot — all of which are upgradeable. You'll also collect three sub-weapons, which fire automatically alongside the main weapon. These include homing missiles, dumb-fire missiles that launch vertically, and Darius-esque bombs.

But wait, there's more! Destroyed enemies leave behind green orbs that power a meter at the bottom of the screen. If you hold the Y button with a full bar, you'll unleash a devastating offensive barrage — unique to each main weapon — that makes short work of bigger ships. Alternatively, you can expend the bar's energy by pressing A, which triggers a 360 degree sword attack that eliminates enemy bullets in your immediate vicinity; it's a life-saver in a pinch. Thanks to several weapon types and these two special moves, one useful for offense and the other for defense, Redux enjoys a refreshing layer of tactical depth.

The most engaging mechanic, however, is the force shard system. Similar in functionality to the Force satellite in R-Type, the force shard system allows the Rigid Force Alpha to collect up to four cannon appendages to the main ship. These function as both additional sources of firepower and a strategic tool in the heat of battle. By pressing the L or R buttons, players can place the shards in four different directions: forward focused, forward spread, backward spread, backward focused. It makes the action in Redux a lot more strategic and dynamic.

In addition to some clever mechanics, Redux sports a few game modes — useful because the campaign covers only six short levels. The first is Main Mission (essentially story mode) with three difficulty settings. Once you beat a level in Main Mission you'll unlock it in Arcade Mode, arguably the best option in the game. Here, you attack each of the six levels independently, shooting for multipliers and high scores, destroying bombs, and evacuating stranded astronauts, à la Sky Force Reloaded. If you manage to finish Main Mission in its entirety you'll gain access to Boss Rush, which pits the Alpha against six back-to-back bosses.

Boss battles in Redux are a highlight. They find a sweet spot between too short and too long, and make excellent use of space. In fact, in some instances you'll need to move to the opposite side of a boss and fire backward to do damage. Furthermore, the game introduces a nice blend of mechanical and organic threats. The best boss of the bunch is probably the stage four big bad, M.O.L.E., which deploys electrified poles you must swerve around to reach its vulnerable core. 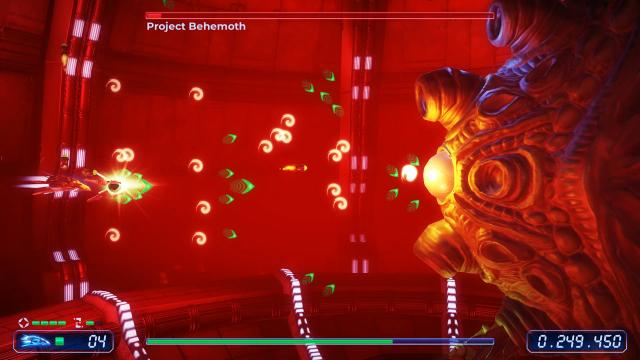 It would be great to experience these boss fights with a friend, but sadly Redux doesn't allow cooperative play, either locally or online. Luckily, Boss Rush and all other modes support online leaderboards.

Rigid Force Redux isn't the prettiest or most original shoot-em-up on the market, but it's still an entertaining game. It enjoys high replay value, thanks to multiple modes and online leaderboards, and solid gameplay due to several interesting and tactical mechanics. Graphics and music lack character and there's no multiplayer, yet despite those letdowns Redux offers plenty to like for shooter fans, particularly if they gravitate toward series like R-Type.

This review is based on a digital copy of Rigid Force Redux for the NS, provided by the publisher.