The titular Myst was 20 years old when developer Cyan Worlds Inc. took to Kickstarter for their next game.  After a modestly successful crowd-funding campaign, Obduction released on PC, PS4, and various VR platforms.  Now, it's come to Xbox One.  Without the early reports of wide-ranging technical issues, it's easier to take the patched version and assess it on its own terms: as a love letter to what they laid in the past and an eye towards present expectations.  Despite some complaints, it’s a worthy successor of the ethos this team has so carefully maintained since their beginning.

Players take on the role of a male, female, or ambiguous insert of themselves as a silent protagonist.  While strolling through a quaint park, a mysterious flying seed abducts you and foists you in a completely new environment.  After acclimating to this interstellar snatching - as much as one can - you're tasked with preparing this world for the voyage back to Earth. 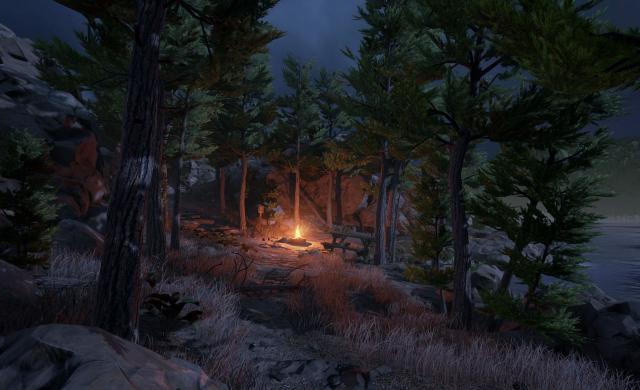 Fair Warning: despite striving to keep things as vague as possible, Obduction is one of those rare examples where providing even basic information can rob some of the initial awe and wonder—even if just a scintilla of it.  Speaking as someone who came in blind on practically all details (plot synopsis included), part of my engagement was born out of that ignorance of the larger worlds, conflicts, and characters at play.  Continue reading at your own discretion.

One of the larger worlds is called "Hunrath," your first stop on this extraterrestrial kidnapping.  It's also the place depicted on the game's cover: the white-picket-fenced country house juxtaposed with a purple alien backdrop.  The conflicting visual tones are akin to Disney's Magic Kingdom plopped in the middle of Death Valley.  But it's the meticulous background detail and grounded approach that sells this idea so well.

Like with Myst before, there's this unquantifiable aspect about Cyan's environments that make the world-building feel so dense and intentional.  Whether it's uncomfortable Hunrath greeting videos, the respectable amount of lore, or rich environmental storytelling, the starting locale goes beyond feeling like a glorified tutorial; in fact, that's what connects so well: the heuristic game design demands heightened attention to everything the game throws your way.  This focus goes beyond logic puzzles and into so-called emotional puzzles: considering how Hunrath’s other kidnapped humans have adapted and processed what they think is best for their in-group. 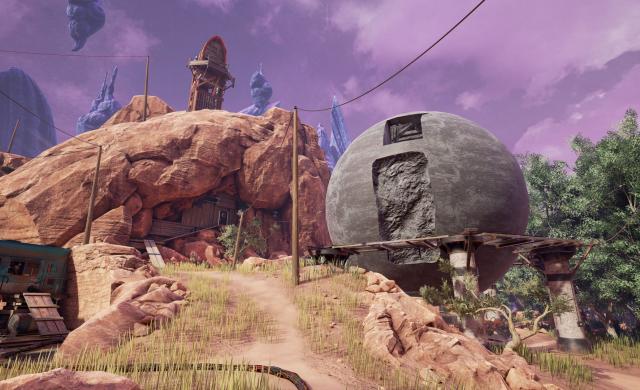 This level of praise doesn't really extend to the over-arching narrative, though that's not its primary aim.  Outside of the oddball video messages by Hunrath's mayor and Farley, another important resident, the only human contact you'll find is C.W., the town's "remainer."  His task of connecting Hunrath with each alien world remains your consistent task.  And while how you go about completing this goal can be accomplished in semi-nonlinear fashion, this stagnant expectation doesn't give room for any dramatic story turns until the ending.

As stated, a multifaceted narrative isn't Obduction's chief concern, but there are a couple of aspects which don't connect.  Given how C.W. is inspired by modern-day expectations of being a player guide and expository character, he's the sole direct face one could have a conversation with, but that never occurs.  Since you only see him through a window or TV screen, it's odd how limited and detached he feels.  I respect it insofar as players can't be dependent upon his hints, but the character part conflicts with this because one would—naturally—want to properly understand what's going on.  There are also two disparate endings revolving around one specific choice.  Though the choice is an admirable way to test your investigative skills, the end result still feels underdeveloped.

Despite highlighting some quibbles, Obduction still deserves recognition for great writing in its world-building and focus.  Despite not having the luxury of the Myst series' history and supplementary books, this fresh start probably enabled Cyan to conjure up some of their best ideas.  How humans and aliens interact with one another, the Villein's unique counting system, and various environmental details bringing life into this world creates a cyclical response from me: seeing this kind of legwork reinforces my hunger to find more backstory, which in turn makes me find more impressive legwork.  ​ 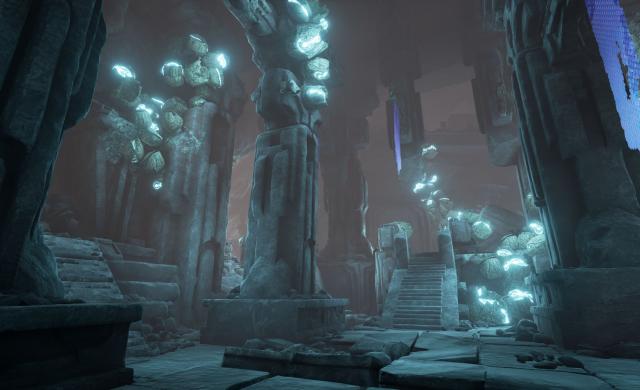 Presentation also deserves due recognition in realizing this world, if more so for artistic direction than technical expertise.  If there's one image from Myst burned into older PC gamers’ collective memories it would be the topographical view of the island.  Seeing a giant rocket ship along with the disparities in elevation, color, and architecture leads you to wonder the secret behind this odd amalgamation.  Obduction thoroughly succeeds in that and does so across different worlds.  The spherical "micro-world" of an old mining town in Hunrath has a plethora of details communicating how abducted residents went about their daily lives.  The stony, foggy backdrop of Kaptar with its enormous gears and wheels is another visual highlight, in both environmental storytelling and imposing vistas.

There's also something to be said about the smaller details within these worlds.  The great visual/aural feedback once they lose their force field would be such a case, along with the concomitant gameplay result afterwards.  There are several great moments of visuals and game design overlapping in lieu of tutorial pop-ups.  All of these subtle variations on standard puzzle concepts elevate the game world into feeling more dynamic than the densest cities littered with NPCs.

All is not perfect, however.  Even with more updates and the beefier tech of an Xbox One X there are still some technical flaws.  Framerate drops or immersion-breaking visual stutters occurred more often than I'd expect; at one point, I had to take a short break from the consistent, minor screen-tearing that was going on.  Loading times were quite modest, which is great considering the amount of teleporting that is done via Swap Machines.  The one artistic visual choice I disliked came back to C.W.'s low-res form when peeking through his house's blast door.  Granted, Cyan’s graphical-rendering staple works well in viewing ominous video messages across Hunrath, but the illusion doesn't really work in what's essentially a conversation. 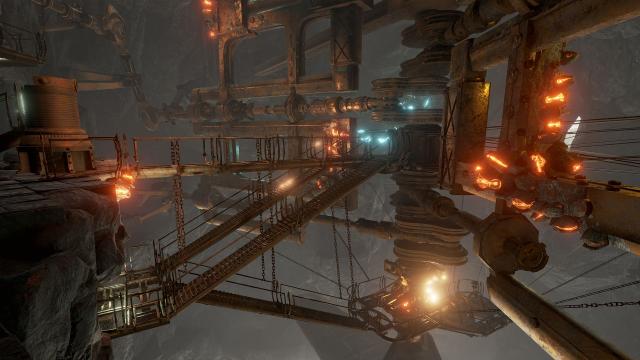 Sound design is another quality appreciated in selling the world versus consistent technical expertise.  Because puzzles based around the environment are so common, there's a lot of tactile feedback with even your most basic interactions.  The acting can get hammy, though it oftentimes clicks with the general tone.  Having Cyan's own co-founder Robyn Miller take on the role of C.W. was surely a treat for many fans; similarly, it won't take long for fans to spot similar themes in Miller's mesmerizing soundtrack as well.

It's strange to take so long musing over elements outside of the gameplay, yet still find each quality inextricably linked to it.  After a carefully guided trip through the campsite, the ways in which Obduction's world design and characters remove guardrails is truly exciting.  You implicitly feel more mental energy spent the further along you go.  The best way that's accomplished is in the sheer variety of puzzle-avenues covered: physically manipulating or destroying parts of the environment, investigative work to find door codes, teleportation, and a unique numbering system incorporating Arabic numerals.  On net, the average puzzle helped elevate the world around it in both placement and intention.  It's one thing to feel no idea was under-utilized and another to feel the larger world was incorporated with such care. 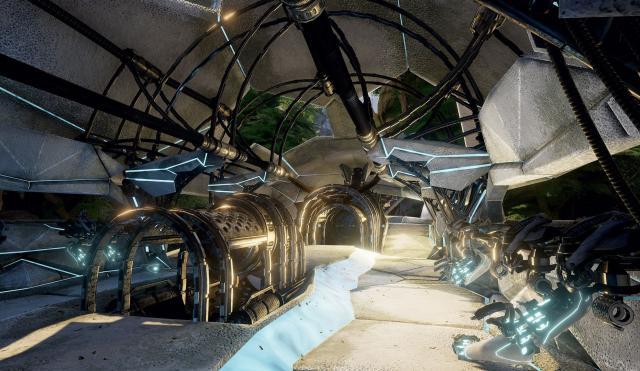 As much as I'd like to express these positives as verbosely as possible, a few puzzles keep Obduction from the hallowed halls of greatness.  The Villein counting system hangs in a balance of two extremes: being one of the most demanding abstractions whilst simultaneously one of the easiest to brute-force (save one example).  Since certain number schemes are required to create bridges on Maray, I was initially flummoxed when everything went according to plan by the second random sequence I made.  You can just repeat a successful numeral over and over for those puzzles.  Maray is also home to the contrived Puzzlelisimo: a 90 degree rotating circle maze with four smaller interior circles containing prefabricated pathways.  When considering how… incessantly I was rotating, teleporting, and reconfiguring, there came a point where my brain broke down.

There's that special case of overindulging in backtracking, but that doesn't mean such requirements are always bad.  This ought to be pointed out: don't come into this expecting an A-to-B type of puzzle thread.  By remaining so guarded about its secrets, the demand to assess things with fresh eyes means you'll be visiting several places quite often.  You could say it adds to the Myst-ery.  Sussing out the details within journals, navigationally ruminating on getting from one location to the next, and considering the importance of specific items in relation to the world all require re-examining and re-re-examining any given locale.  Are there a few times the back-tracking can be too punishing?  Outside of the Puzzlelisimo, a few areas suggest shortcuts would've been rational to include; on net, this stern attitude towards assists is one of its best methods of managing difficulty. 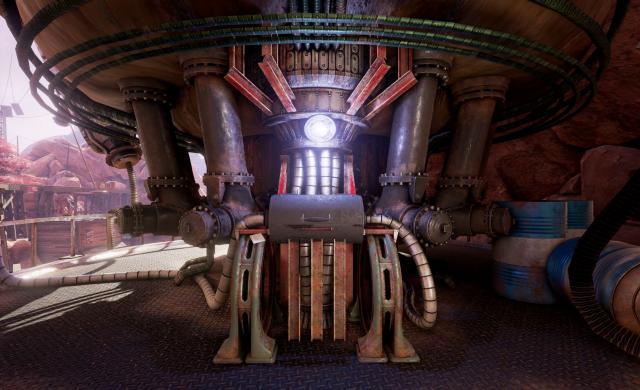 For all the successfully crowd-funded projects that became flubs, Cyan's latest ranks among the success stories.  Specific aspects weren't integrated as well as they should, but the accumulated successes outweigh some annoying flaws.  Despite a few apparent shortcuts for budget considerations, the striking presentational qualities, large amount of engaging puzzles, and more make the $30 price point look incredibly modest.  From beginning to end, Obduction is a confident first-person puzzler that's more enjoyable once you get past the Myst potential.

This review is based on a digital copy of Obduction for the XOne, provided by the publisher.

Good to hear that Cyan Worlds pulled this one off. Honestly I was a bit afraid that it will be a dud. Will try this one out. 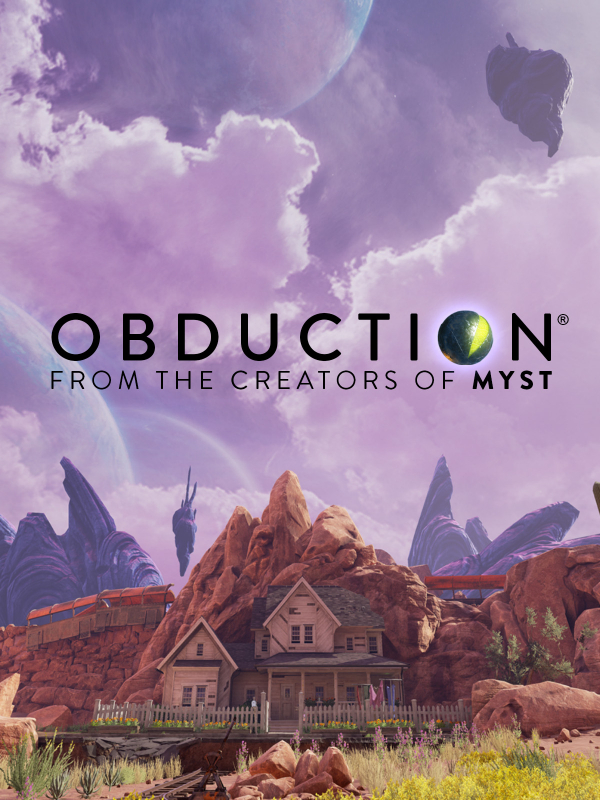