Brick breaker games have been a staple of gaming from the very start, not least because they're simple to understand and accessible to nearly everyone. But to make a noteworthy brick breaker in this day and age is an immense undertaking. Twin Breaker: A Sacred Symbols Adventure boldly plays around with the traditional control scheme and also integrates a story mode into this ubiquitous genre in an attempt to make something special.

The main gimmick of Twin Breaker is that the control area is split between two paddles that each cover half of the playfield’s exit; one paddle for each of your thumbs to control to ensure that the ball doesn’t get past you. This seems intimidating initially, but with the large ball, gradual speed building, responsive controls, and surprisingly large area covered by your paddles the game is designed for you to succeed. That's not to say Twin Breaker is too easy, but rather that when a ball gets through your defences it doesn’t feel cheap; you will have had time to get there had you been better prepared.

The real substance of Twin Breaker is Mission Mode. It has a severely optimistic view of the future for the USA, where US ships are sent to neighbouring star systems on missions of exploration. Because of the immense distance needing to be travelled, the crew are meant to live out multiple generations upon these ships before reaching their destinations. These generation ships start disappearing and eventually make contact again with Earth in a distressing way. Enter our two brave heroes who set off to discover the mystery of the missing ships. The two paddles under your control are the heroes' two shuttles and as you progress from level to level you’ll begin to understand what happened to the former denizens of Earth. Pretty overly intense stuff for a retro-inspired arcade style game.

After getting comfortable with the two paddle system the concept is gradually expanded in later missions. Initially, both paddles are located on the bottom of the playfield with the only exit for the ball being on the bottom of the screen. You’ll eventually play levels with paddles and playfield exits on both the right and left simultaneously, but most sinisterly you’ll be challenged with levels where you control four paddles, with two on the bottom and one each on the right and left side of the screen. That means three quarters of the screen will be ball exits, which make for some truly challenging brick breaking.

Mission mode is 40 levels long, which isn’t a great deal for an arcade style game, but by keeping it to 40 missions the levels remain curated and there are very few that feel lazy or poorly designed. Some of the most interesting levels are the boss fights, in which a hulking monstrosity will attack your paddles, temporarily shrinking them in size and reducing their speed. You’ve got to strike the enemy enough times to reduce its health meter before running out of lives. These aren't the hardest stages, but they're another welcome shake up.

My personal favorite aspect of a good brick breaker are its power-ups. Twin Break doesn’t slack in this department and borrows some of the best and most iconic power ups from its genre predecessors. The power-up drops aren't stingy either, and you’ll often find multiple drops falling in close proximity to each other. This can make for some fun and interesting combinations.

For those looking for the fullest fleshed out story and a platinum Trophy, you’ll be shooting for an S rank on each of the mission levels. On some stages this seems overwhelming, but the right combination of power-ups can make your life a whole lot easier. For those simply content with beating each stage you start with three lives and have the ability to earn or purchase more in each stage as you play. So regardless of whether you’re looking for an S rank challenge or just some relaxing fun you can play to your liking.

If you’re looking for a break from Mission Mode there are six additional arcade modes to engage with. Pong Mode is my favorite of the bunch, with the stage bosses returning to battle you head to head, Pong style. The bosses function as they do in the missions, where they have a health meter and attack your paddles, but the goal isn’t to destroy them it's to simply get a ball past them. You can, however, still destroy them, which gives you a few seconds to easily toss a ball through their exit. Still, with some clever play you can sneak it past them without the hassle of destroying them. If you enjoyed the main game you should find some enjoyment out of most of the extra modes as well, even though none of them are nearly as fleshed out with rewards or Trophies.

Twin Breaker features some really great music tracks too. Many of them are great to just chill out to and knock a ball around the screen as you attempt to reach that zen-like state of mind. It’s just a shame you can’t select your favorites, or keep one on a loop for as long as you like.

Twin Breaker: A Sacred Symbols Adventure is exactly what it intended to be. It’s a twist on a bite-sized arcade favorite formula, and it manages to tell its sci-fi story amidst a brick breaker clone of all things. The 40 main stages are a tight package accompanied with some extra modes for those craving a bit more and are willing to push themselves to chase a high score. For the price and the time commitment this is an exceptional way to spend several hours while social distancing or in self-isolation during these chaotic times.

This review is based on a digital copy of Twin Breaker: A Sacred Symbols Adventure for the PS4, provided by the publisher.

So basically what Colin and Chris came up with was a Break Out game...

I don't know Colin or Chris very well, but yes it's a Break Out game. It's a solid, charming and fun break out game :)

Colin is a big fan of Shatter, so it makes sense that his first game would be in the same vein. 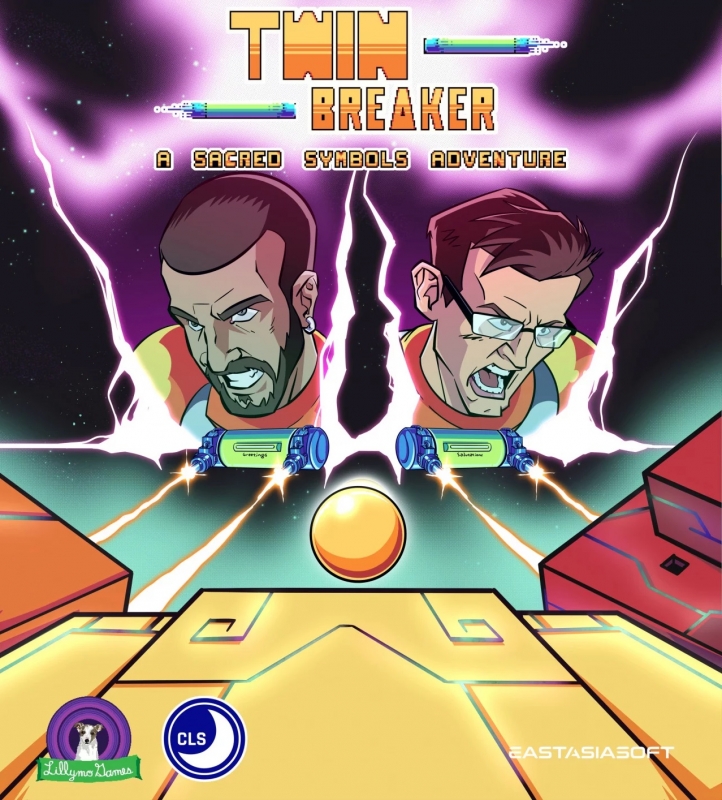