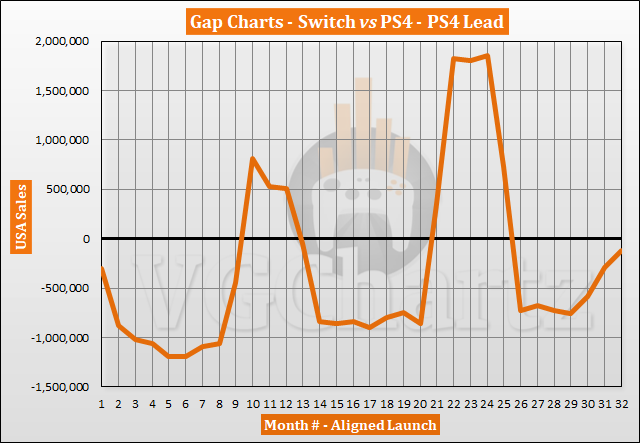 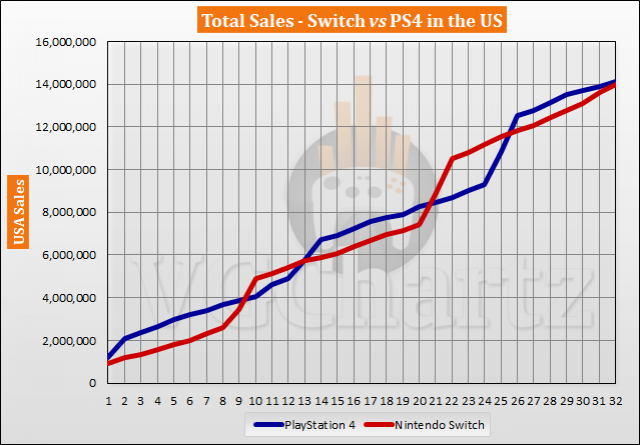 PS4 sold 367k in July + August 2016, Switch sold about 3 Million November + December 2018. The same Switch numbers would make Switch lead by about 2.5 million at month 34. That would be a bigger gap than ever before. PS4 will be at 17,66 million in 6 month (after holiday season 2016). Lets say Switch sells about 3 million again november + december 2019, then it needs to sell 700k from january 2020 to april 2020 to keep the lead after ps4 holiday. I would consider this as possible. So maybe(!) Switch will take over ps4 next month and then keep the lead for long time. I love that kind of playing with sales numbers. :D

I think it all depends on how well the Switch sells in December. Switch sold 75k in Americas (Which is 80%+ USA) per week during August while waiting for the Lite and upgraded base model, so reaching 700k during the 18 weeks of January through April is a given, especially with Animal Crossing releasing during that period. In fact, I'm pretty sure Switch will be able to sell over twice those numbers during that period, so around 1.5M in the US January trough April.

oh yeah, my bad, I totally forgot about Animal crossing. xD So lets say its basically 3.7 Million in November 2019 untill April 2020. Well yeah, I think Switch will manage to get those numbers. :-)

So… soon europe will be the only remaining PS-stronghold?

Oups, I would not like to be at the place of the PS4 here.

To once think the Switch would bomb.

It's time to jump up in the air
Jump up, don't be scared
Jump up and your cares will soar away ♪

make PS4 VS Switch in Europe

Switch is on the cusp of becoming the highest selling current gen console in the US. That's despite launching over three years after its competition. Let. That. Sink. In.

May be the last one too.