Among fans, the sixth Star Trek film is often called Star Trek VI: The Apology, as it returned to form after the much-maligned Star Trek V. In the same way, Trine 4: The Nightmare Prince is a make-up call for Trine 3, the shortest and poorest entry in the original trilogy. By returning to the series' 2.5D roots, smoothing out any rough edges, enhancing combat—for a decade the weakest link in the Trine chain—and sporting gorgeous art and lovely music, Trine 4 delivers exactly what the ten-year-old puzzle-platform franchise needed. It's also the best Trine game yet, although not without a few minor faults.

Trine 4 once again reunites Amadeus, Pontius, and Zoya, the three unlikely—or, perhaps after four games, likely—heroes who discovered the power of the Trine many moons ago. This time, the Astral Academy, a wizarding university, has requested the threesome's skills in locating and returning a wayward prince. Two years prior, the prince, Selius, was overcome by dark magic and sent for safekeeping to the Academy. As the most reliable and famous heroes in the land, Amadeus, Pontius, and Zoya accept their mission to retrieve Selius and prevent the young man from manifesting his nightmares in the real world. 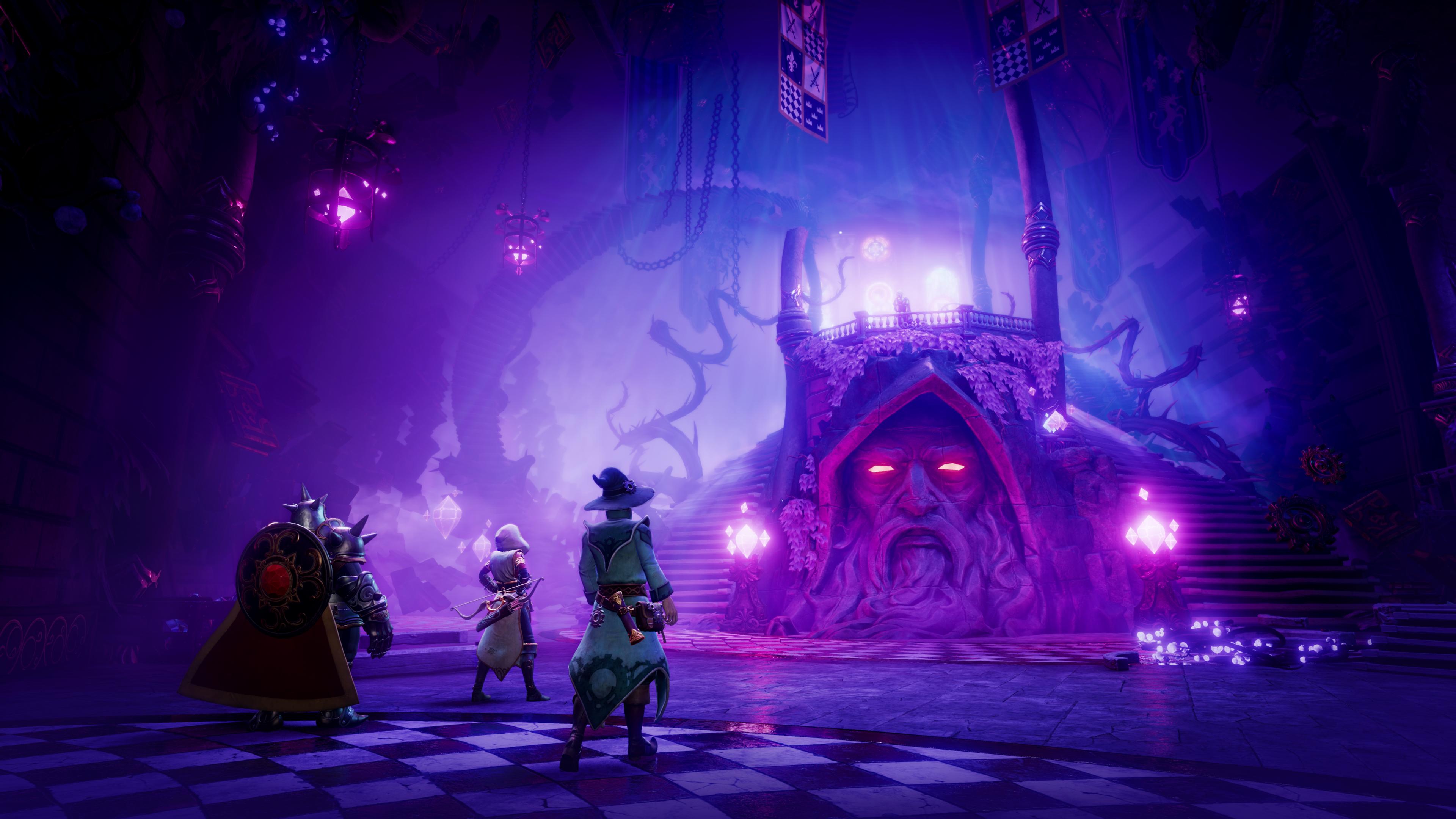 The story in Trine 4 is a nice mix of nostalgia and new information. The three champions banter and joke among themselves—referencing Amadeus' fear of his wife, Pontius' dangerous appetite, and Zoya's proclivity toward theft—but also encounter new lands and new NPCs. Selius himself, part victim and part villain, is a fine addition to the character roster. He serves as the MacGuffin, sure, but also challenges the heroic troika and reveals their personalities under duress.

Outside of the main storyline, Trine 4 operates according to the rules of the first two Trine games. It's a side-scrolling 2.5D puzzle-platform game where three heroes with unique skills solve physics-based puzzles and on occasion fight off monsters. In single-player mode, one player swaps among Amadeus, Pontius, and Zoya. In "classic" multiplayer, three players take on the role of their favorite hero. There's also an "unlimited" mode that supports up to four players simultaneously, where you can mix and match combinations of characters at will. All multiplayer features are available in offline and online modes, although the lack of voice chat online makes coordination unduly difficult. 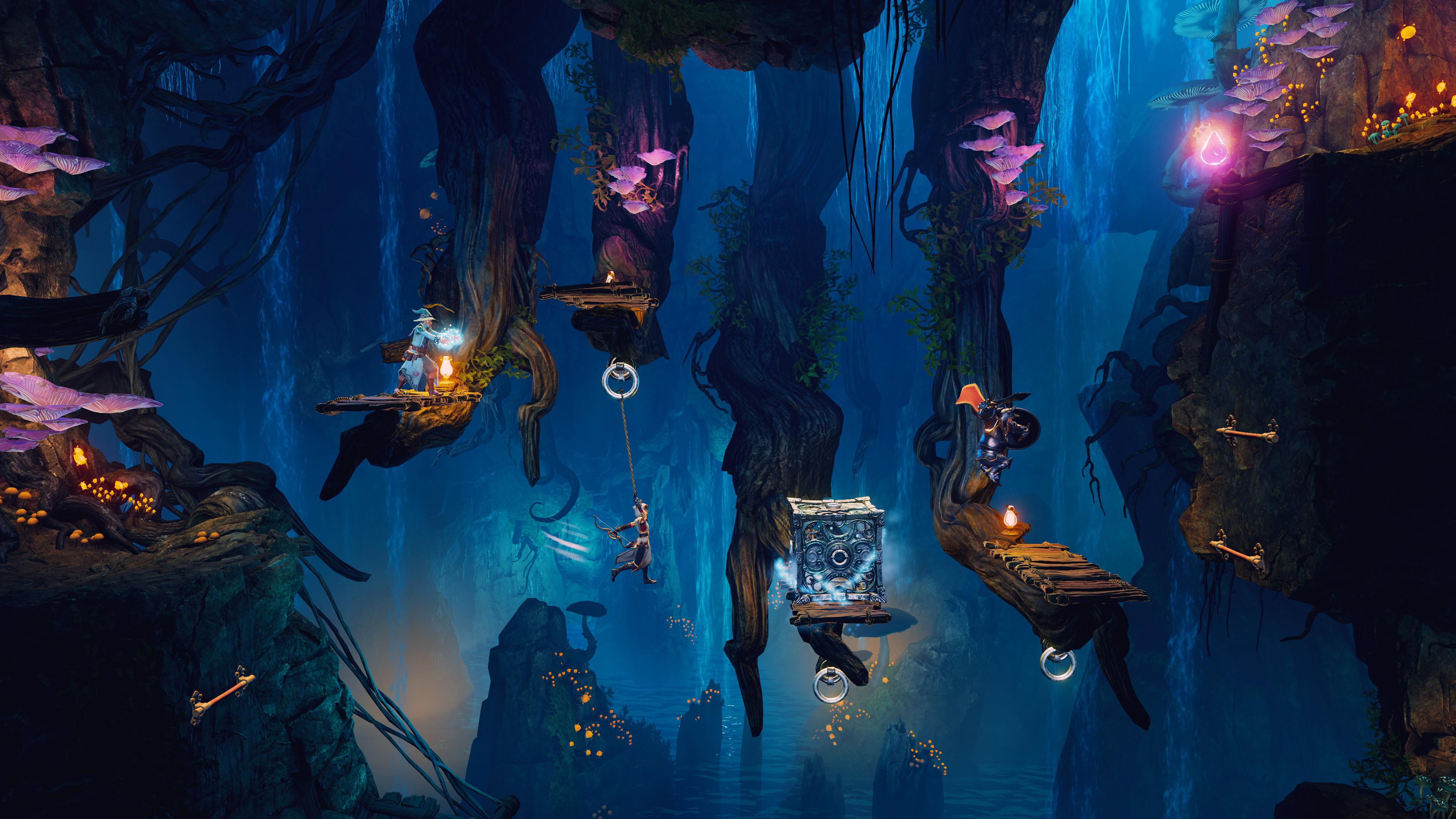 Perhaps the most brilliant element in Trine 4 is its dynamic-puzzle solving system, which tailors puzzle-solving situations to the number of players involved. A game played solo will be quite different from a game played with three or four players, as puzzles in each level are remixed to offer greater challenge and encourage teamwork when playing in multiplayer. It grants the already substantial game high replay value and provides rewarding experiences for solo players and co-op teams.

Regardless of the number of players, Trine 4 starts with tutorial levels for each of the three playable characters and then throws you into the fantasy landscape of Trine. You'll visit snow-capped mountains, haunted mansions, swamps, forests, caverns, and even the home of a friendly badger. The levels are wonderfully diverse and surprisingly long—perhaps the slightest bit overlong. Inside each one are dozens of clever puzzles with many potential solutions. Developer Frozenbyte sets the stage, gives its players a set of tools, and invites them to improvise. Do you use Amadeus the wizard to stack magical boxes to reach a high platform, deploy Pontius the knight to ground pound through the wooden floor, or ask Zoya the thief to slice through a rope holding a drawbridge up; or maybe some combination of the three? Trine 4 is at its best when ingenious puzzle meets creative solution. 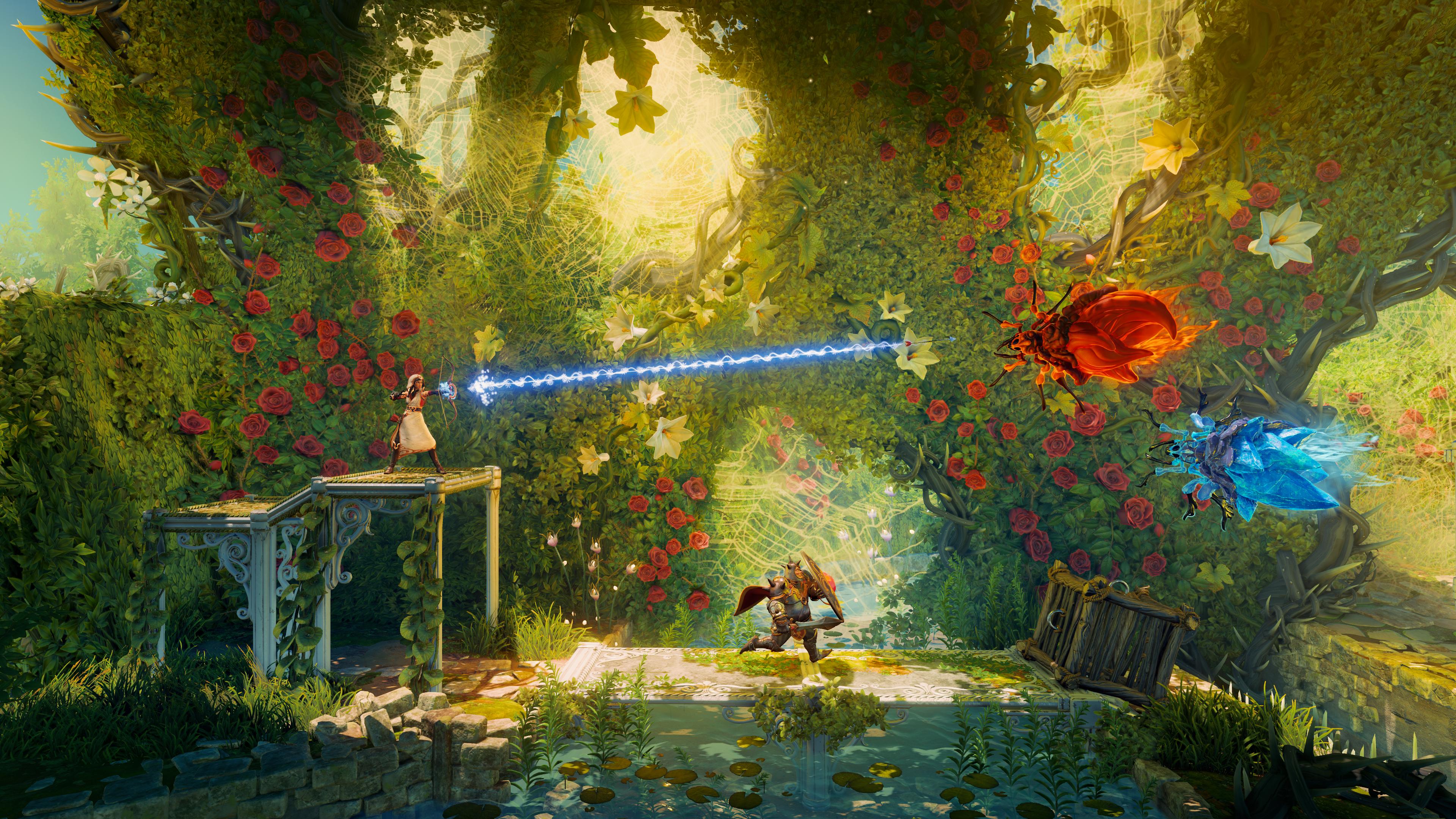 The slow drip of new abilities makes late-game puzzles even more imaginative and devilish, and creates a sensation of character progression. As the champions of Trine defeat monsters they'll earn experience points that unlock skills. Amadeus, for example, will learn to summon steel balls, which all characters can use to cross dangerous floors; Pontius will earn a reflective shield, which redirects sunlight to open doors and defeat overgrown vines; and Zoya will gain access to the fairy rope, which grants objects weightless properties.

If the puzzles are the best part of Trine 4, then combat is its most flawed feature. Frozenbyte has made great strides in fighting—the studio has given Zoya and Amadeus more offensive tools and introduced new enemies with special moves—but this latest and greatest Trine game still suffers from weak combat scenarios and boss fights. At certain junctures in every level, Selius' nightmares will literally come to life and attack our heroes. The screen is locked and Amadeus, Pontius, and Zoya must vanquish every last monster before proceeding. With interesting new enemies like fire spiders, head-hunting hedgehogs, and demonic archers, combat is more varied than ever before, but it still, ultimately, boils down to a button-mashing affair. Technically, Zoya and Amadeus could fight, thanks to brand new offensive firepower, but Pontius' sword and shield are often enough to win the day. 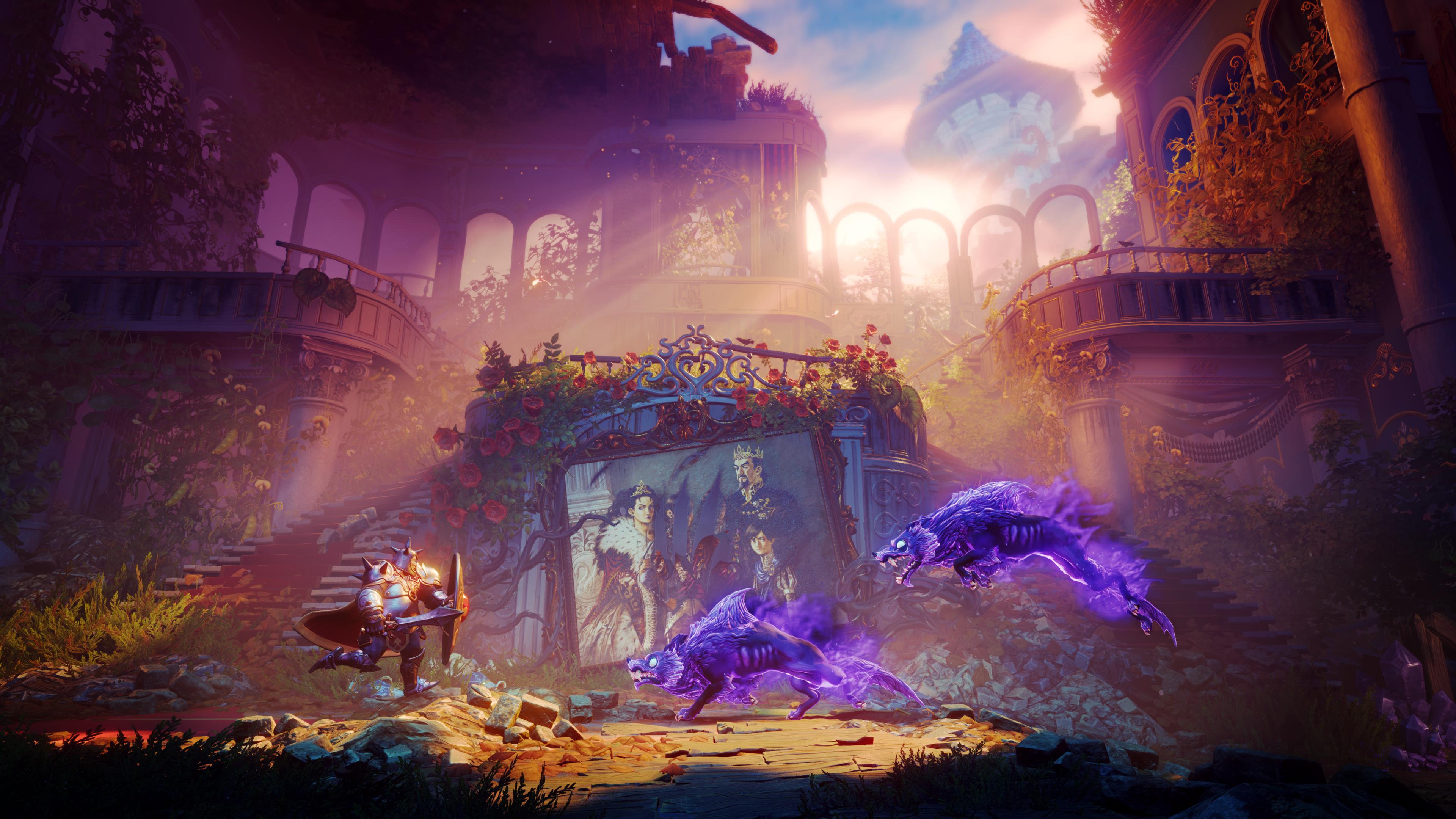 Boss fights are a similar story. Trine 4 boasts the best collection of bosses in the series, but they're still easy button-mashing endeavors. The final boss encounter is especially disappointing. Less dispiriting are three boss battles unique to each hero that play on their fears. Essentially nightmares given voice and form, these battles are excellent from a thematic point of view but not terribly engaging mechanically. They're also designed around one player and subsequently unimpressive in the context of co-op.

Outside of puzzle-solving and combat, Trine 4 offers many opportunities for exploration off the main path. Hidden in each level are letters, artifacts, and components. Find enough components and you'll craft a new fixture or piece of furniture, which will then appear in the game's interactive home screen. Every stage also hides dozens of experience orbs, which allow players to enhance each character's abilities in a skill tree. While a neat addition, the skill tree adds little to the equation. You'll be able to breeze through the campaign without using your accumulated skill points. 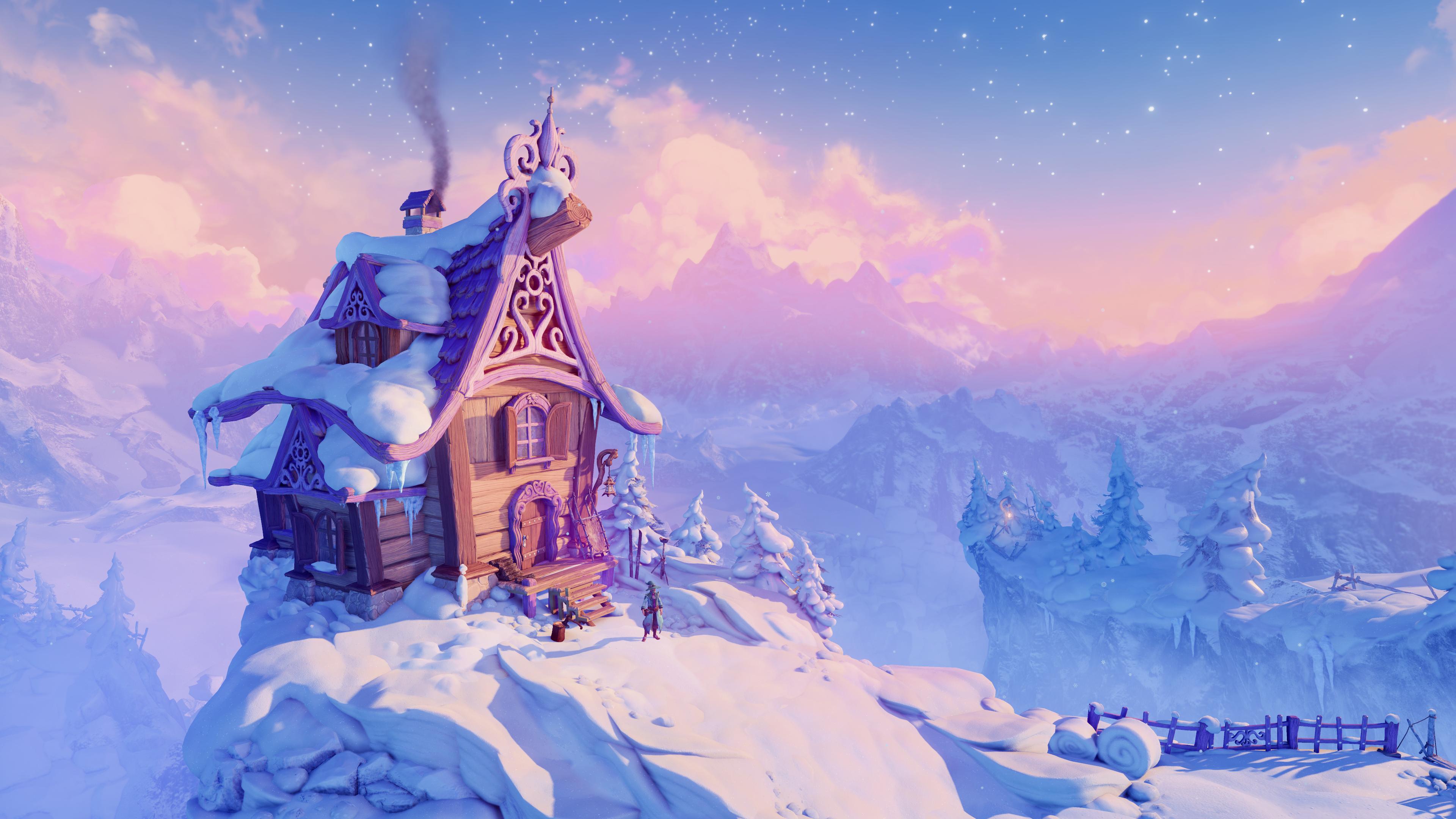 The Trine series is known for its creative problem-solving and secrets, but arguably its most recognized features are spectacular graphics and music. On this front, Trine 4 doesn't disappoint. This is one of the most lavishly-designed and gorgeous 2D titles of the generation, with jaw-dropping art direction, atmospheric lighting, and backgrounds bursting with hundreds of little details. Music, by Trine mainstay Ari Pulkkinen, is equally inspired. Pulkkinen's moody, magical tracks are, as always, an ideal complement for the enchanting visuals and storybook setting of the game.

Trine 4 is the best game in the franchise, and a refreshing return to the series' roots after the ambitious-but-flawed third installment. It's as beautiful-looking and sounding as ever, it sports a dynamic puzzle system that conjures unique challenges for differently-sized parties, and it includes scores of clever puzzles with multiple outside-the-box solutions. Combat, while improved, prevents the game from realizing its potential, as do a superfluous skill tree and the lack of communication tools in online multiplayer. Even with these minor flaws, though, local co-op enthusiasts and puzzle-platform fans should scoop this one up.

This review is based on a digital copy of Trine 4: The Nightmare Prince for the NS, provided by the publisher.

Really enjoyed this one, best looking game on Switch in my opinion and easily the best game in the series thanks to its more responsive movement and platforming.