The Nintendo Switch has brought with it the first mainline home console Fire Emblem in over a decade. A staple of handheld devices since then, Three Houses announces Fire Emblem's return to TVs everywhere with a myriad of new ideas, blending standard turn based combat with features from more traditional RPGs. How well do they hold up, though? Does Three Houses manage to seamlessly blend the genres it draws inspiration from, or does it fall short of its lofty ambitions? 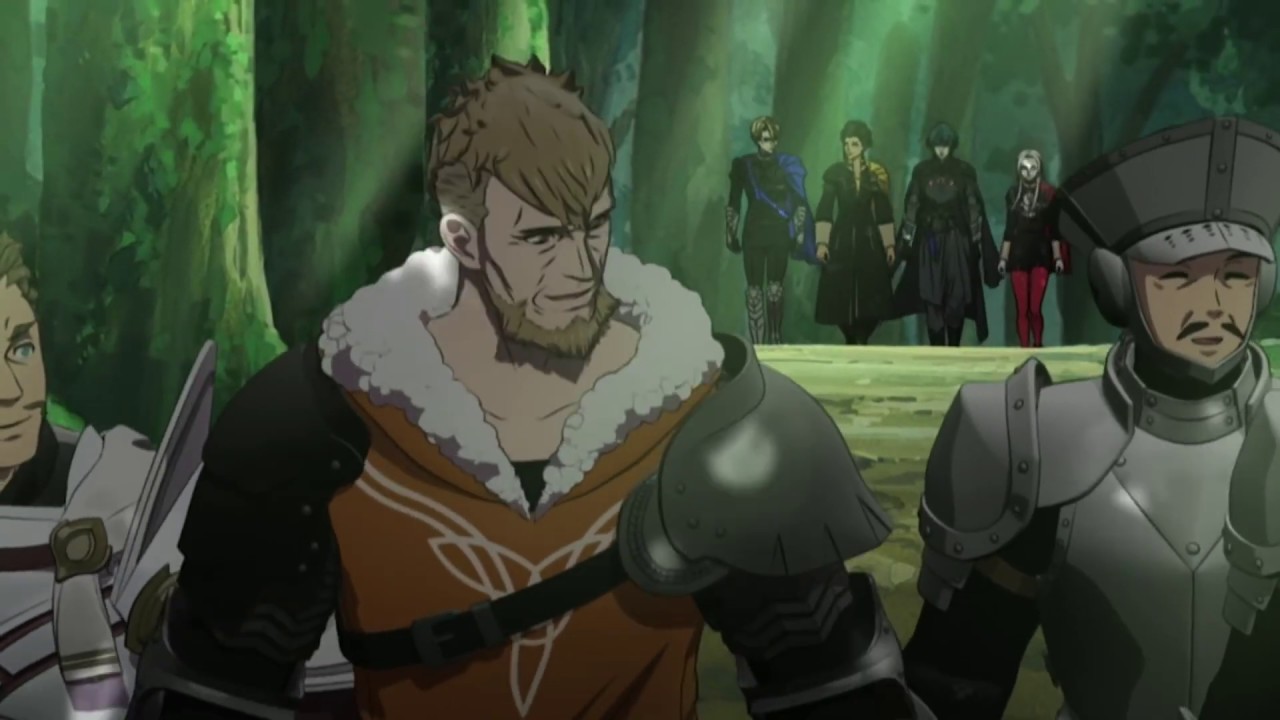 Unlike the past couple of Fire Emblem titles, Three Houses doesn’t spend much time with its introduction. There’s a quick prologue mission, characters are established in a couple of cutscenes, and after that your player character (default name: Byleth) is whisked away to become a professor at Garreg Mach Monastery, located in the middle of the continent of Fodlan. You are then asked to lead one of three houses, which is essentially choosing the majority of your units for the rest of the game, along with which story path you’ll branch off with after a certain narrative turning point. There isn’t a lot of time to form an attachment with any of the houses before you choose, but I don’t view that as a problem in the same way it was in Fates, as initially you’re just taking a job rather than declaring war on everyone else.

Characters are, for the most part, an improvement in this game over most Fire Emblems. Thankfully, we’ve moved on from having a significant chunk of characters that are entirely one note in motivation and personality (hi Peri). Virtually every student is relatively complex and has tangible motivations of their own that you can learn about through supports. That said, it doesn’t really feel like anyone stood out with the same level of complexity in motivations of someone like Lucina in Awakening, or had an arch as fleshed out as Ike does in the Tellius games. Just about every major character feels just complex and well written enough to be engaging, without being so well done that I truly found any of them to be in what I would consider the “top tier” of what the series has produced.

The house leaders - Claude, Dimitri, and Edelgard - are all very solidly written, but I feel that the game falls just barely short of fleshing out their motivations and goals enough to push them into the deepest and most engaging characters Fire Emblem has produced, which I think may have something to do with the timeskip element of the story.

The differing story paths come into play after about 12 chapters or so, at which point the aforementioned time skip occurs and the game shifts five years into the future. It’s here that the quality of the narrative can alter itself drastically. The Golden Deer route (which I chose initially) jumps around from plot point to plot point so quickly that everything feels extremely rushed and nonsensical, culminating in a finale where the final boss essentially just shows up out of the blue and fights you in the final chapter. Multiple plot threads go unanswered, the fate of a couple of characters is never resolved, and we get no explanation for why a certain individual was motivated to cause the events that led to the paths diverging.

Conversely, the Black Eagles route answers all of these questions (at least to some extent) and introduces its final boss in a much less sudden fashion, leading me to suspect it was the main path that the story was built around initially. This isn’t inherently a bad thing: in fact, you could very realistically consider it as a good thing, given that it’s simply more content for the standard console game price of $60. That said, it’s a little disappointing that not all routes tell their story as sensically, and you can likely be left very confused if you play the “wrong” one first. It's also a little disheartening that many of the initial chapters are so similar given that you'll need to play through them at least three times in order to experience everything the game has to offer.

From a gameplay standpoint, Three Houses brings a mix of old and new to the table, most of it positive. Within combat, the inclusion of the gambit system, a limited usage attack that prevents retaliation and debuffs enemies, is an additional tool in your bag of tricks that can be essential to taking down tougher enemies. There are also new miniboss style enemies with multiple health bars and large AoE attacks that require some clever thinking to avoid casualties while fighting (especially if you make the mistake of aggro-ing more than one). Certain attacks will cause these enemies to focus directly on a certain character, which is a good way of allowing your squishier units to attack while giving the player a way to make sure they don’t get immediately incinerated.

Three Houses also brings back some positive mechanics as well. Weapon durability, absent from the last two Fire Emblem titles, returns, with an interesting new twist that allows players to spend more durability on a given weapon in exchange for a better attack (stronger, more range, etc.). Most of the map design is solid as well, with the more gimmicky terrain altering maps from Fates/Echoes being tossed aside.

Somewhat disappointing is the implementation of the Divine Pulse system, which acts functionally similar to Mila's Turnwheel in Echoes in that you can rewind time a few turns back. This starts off as a reasonable way to fix minor mistakes without having to restart an entire map, but you eventually acquire so many different opportunities to turn back time it utterly eliminates any tension there might be for making a mistake. I eventually found myself just choosing to not use it because of how unpunishing bad decisions got to be, and I'd highly recommend self imposing at least some sort of limitation for challenge's sake, even if you're playing on hard.

Another minor disappointment is the return of Fog of War, but these maps are relatively few and far between, so this is something of a nitpick. Conversely, there are a couple of absolutely fantastic maps that are extremely creative as well, usually prologue chapters, that really made me think about unit positioning and order of attack. 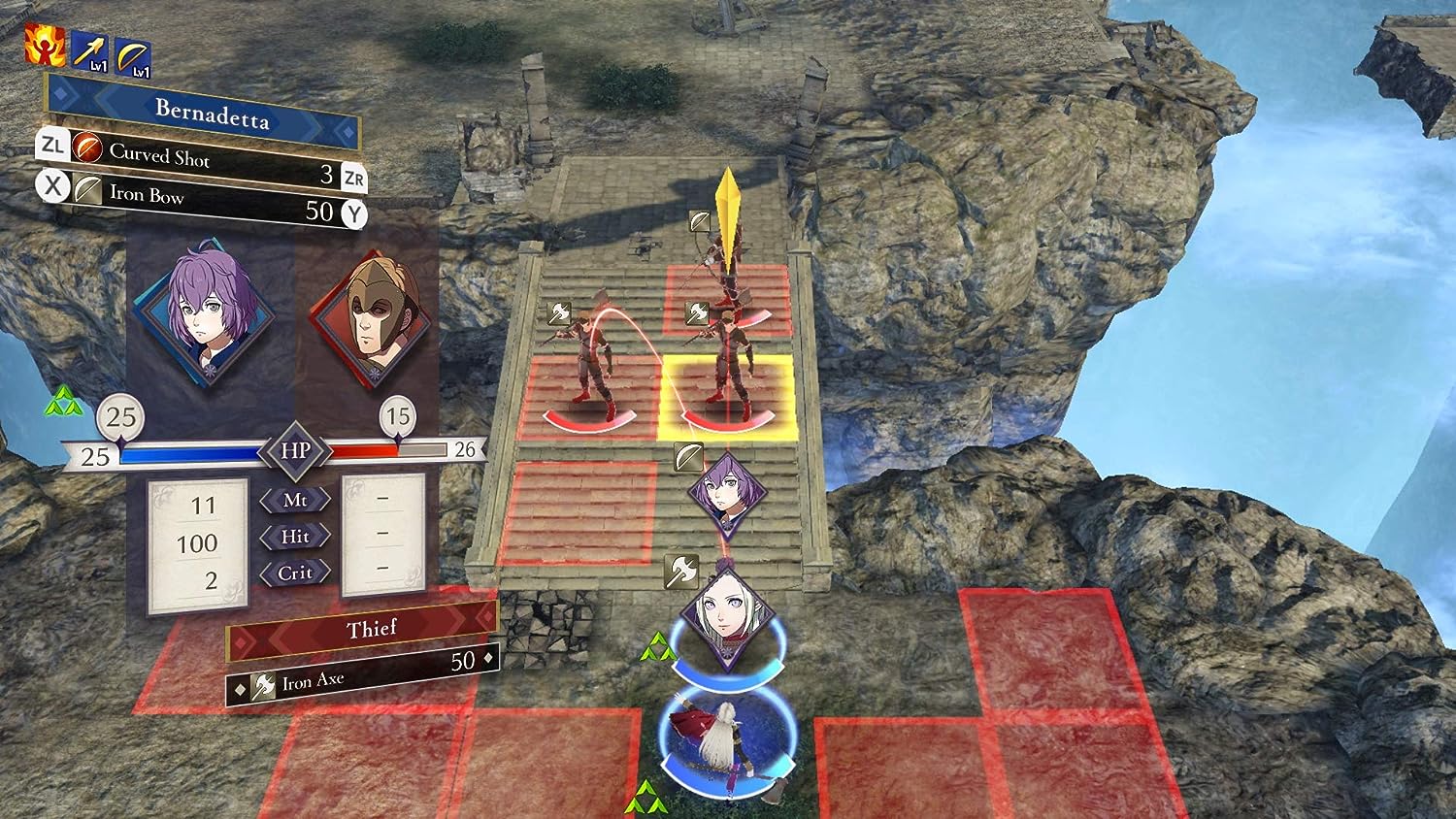 The biggest new additions to the series come outside of combat, however. Byleth is tasked with serving as a professor for a group of students at an academy, and when you’re not battling people you’re in charge of preparing you and your understudies for the upcoming fight. There’s a Persona-esque calendar system where you’re told in advance when a story battle will take place (usually at the end of a month), and you’re charged with figuring out the best way to spend the limited time between now and then to be best prepared. This can include instructing your students to help them improve their proficiency in different areas of combat, taking seminars to improve your own abilities, undertaking optional battles to boost XP and stats, and of course doing various odd jobs around the monastery to improve your social standing and earn more funding/time slots to perform activities in. There’s a nice rhythm to it once you get settled in, although I wish a little more variety had been added in by the end of the game.

Along with the ability to instruct students comes a great deal of customization. With the exception of Byleth, each of your units will spend each week “studying” in one to two fields of your choice in order to become more proficient at it, essentially allowing you to customize what classes, weapons, and skills your units use to a much greater degree than even Awakening or Fates allowed. Different classes still place restrictions on which weapons a unit can use, but it’s much more possible to subvert that by having a unit focus their studies in a field that they aren’t currently using in combat. I wound up enjoying this system quite a bit; planning a student’s journey through the various tiers of classes is surprisingly engaging. While it isn’t without a few issues (the variety of final tier classes is sorely lacking), it’s a welcome addition to the series, and something I hope gets brought back and expanded upon in future installments.

The explorable monastery actually isn’t as big of a factor as it may have initially seemed in previews, largely being an option for ways to spend your time preparing for a battle. The ability to interact and visit with characters beyond just support conversations is a welcome addition, though, and a nice way to cool off after an intense battle. You can also meet with students who aren’t currently under your instruction, and provided you engage with them in the right ways or develop your skills in ways that interest them, you can even recruit them to your house. For much of the game, it strikes a nice balance, neither becoming so important that it feels like it takes away from the focus on the battles, nor being just a pointless side activity. That said, by the end of any given route, the monastery begins to feel like something of a drag: it might have been nice to have added additional fleshed out elements for the player to participate in as the game progressed. 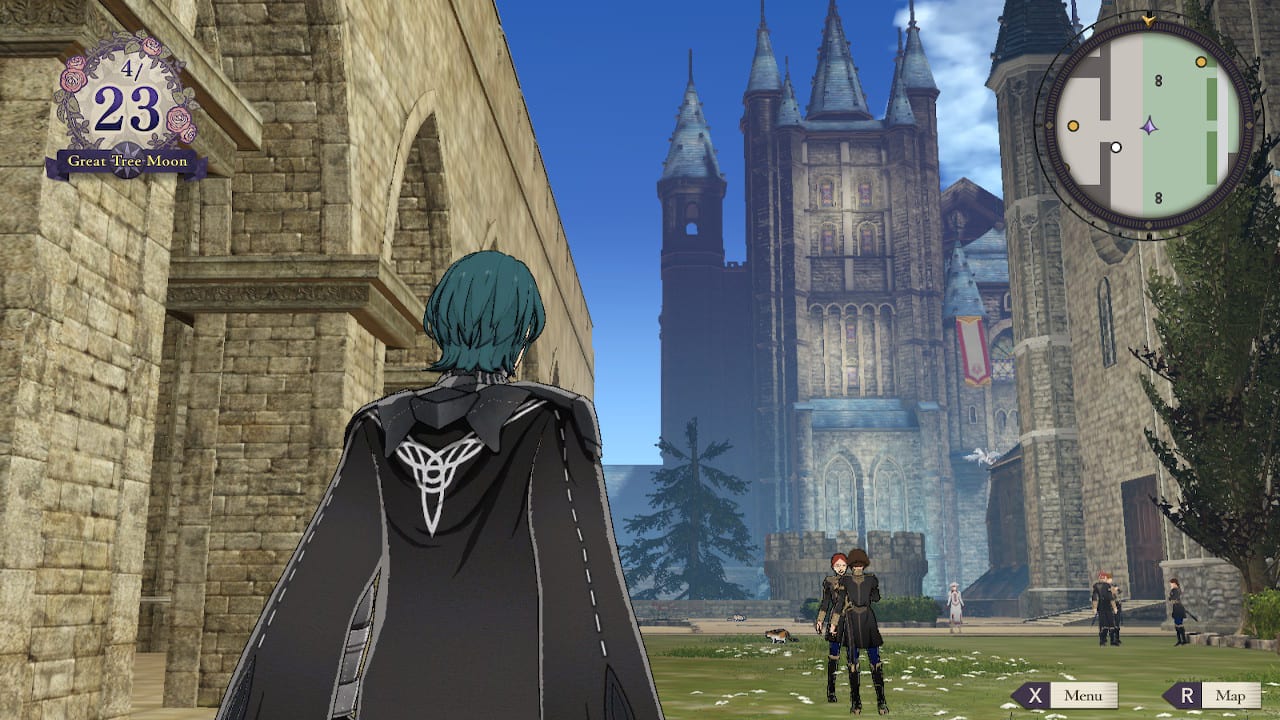 Aesthetically speaking, the move to the Switch has generally paid off. Combat animations feel much more fluid and natural compared to past series, especially the Tellius games, where characters looked incredibly stiff and awkward. The 3D models look solid for the most part, although there are a few support cutscenes that get a bit too close to the character models for my comfort and make them look iffy. Conversely, however, the environments are varied and quite enjoyable to look at, and the sound design is fantastic across the board. IS has done a fantastic job with the music, and all of the voice actors are spectacular.

Ultimately, Three Houses is a very good game. There are quibbles I can throw at it, especially with the story structure in some routes, how easy it can be to take down some maps with bait tactics, and the fact that Byleth possesses the personality of a plank of wood with a stern expression drawn on it for most of the game, but there are tangible improvements this game makes over both Fates and Echoes which make me excited to see where the series goes from here. The game possesses a substantial amount of content for $60 between the four different available routes, and from the looks of things additional free difficulty settings are coming which should provide plenty of challenge for anyone who is so inclined. If you don’t have much free time on your hands, this probably isn’t the game for you, but if you like strategy and you’re looking for a game to keep you occupied for a long time to come, you probably won't go wrong with Three Houses.

This review is based on a copy of Fire Emblem: Three Houses for the NS

I'm happy I chose to start as the Black Eagles first. Edelgard's story was great. I'm on my second playthrough now and this time I'm in the Golden Deer house. I like Claude. Despite coming off as easy going there is a lot of depth to his character and hes grown on me. This is my game of the year so far and my RPG of the generation, dethroning Xenoblade 2.