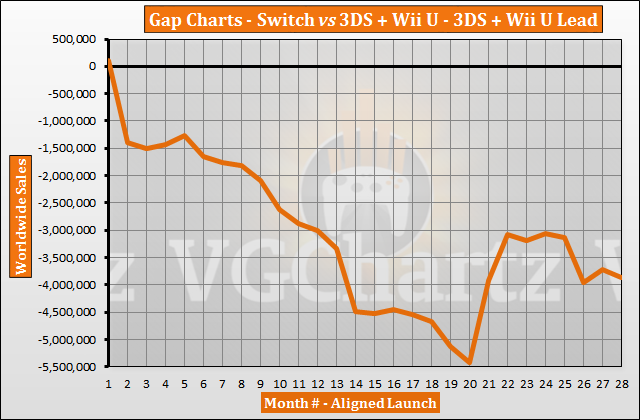 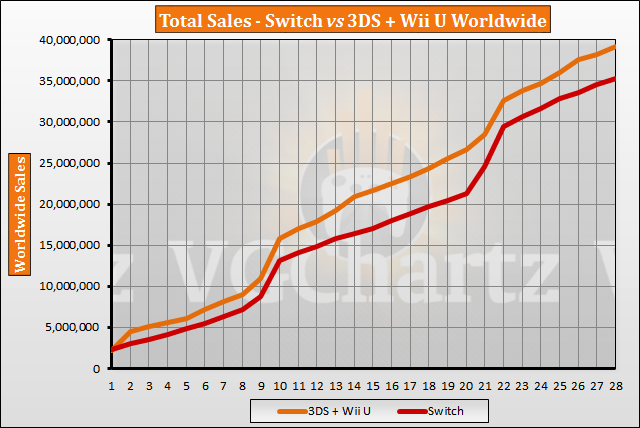 The 3DS launched in February 2011 (however, 3DS sales have been aligned to March 2011, since it only launched at the end of February in Japan), the Wii U launched in November 2012, and the Nintendo Switch launched worldwide in March 2017. The Switch has sold 35.33 million units, while the 3DS and Wii U have sold 39.19 million units during the same timeframe.

I think the Switch will take the lead by the end of this year. The Wii U isn't helping anymore.

Wii U is still helping. It's not very much, but enough to make the 3DS+Wii U have a lead while the 3DS alone is trailing behind the Switch.

Still, I agree with you that the Switch will probably take the lead this holiday season and never loose it afterwards. But that's not just because of the weak sales of the Wii U, but also because by then the 3DS is already past it's peak and dropped down considerably.

well we are looking at 90M total sales here, switch I think will pass it, if continue to keep good pace

for some reason I assumed the Switch would be ahead by now vs 3ds+WiiU.

Did you know guys that the whole difference in total sales of Ns vs 3DS+WIIU comparison, originates from the sales gap between 3ds and NS in Japan? NS has replaced both 3ds and wii u in the west with tremendous success, but in Japan it has only replaced 3ds and not to such a great extend, hence the NS lite.

The gap between the two curves looks to be at its widest last year. This year the gap is narrowing. Considering the 3DS and Wii U peaked early, I expect the gap to totally close and the Switch to pass them soon and never look back. Also the 3DS had a price cut its first year, but the Switch hasn't had one yet. (I guess the Switch Lite will count as the first type of price cut.) If 3DS + Wii U is 90m total, then expect the Switch to sell far above that.