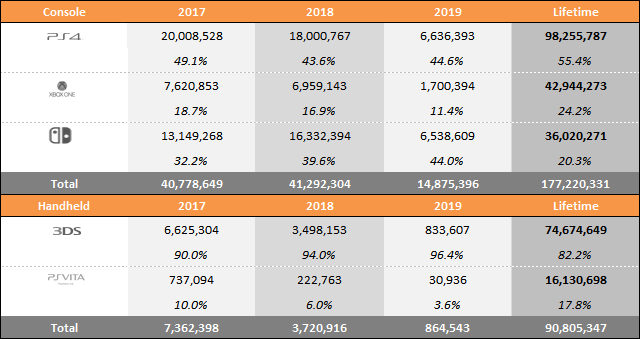 PS4 still leading the way in its 6th year. Amazing!

So the whole time switch was behind PS4 sales for the year and everyone here though that PS4 behind switch sales .. and it turn out it wasn't true was it

I am afraid we are going to a state where all these data will be available only by payment for the investors who are rich enough to pay for it.

we were misleaded about the PS4 sales since the beginning of the year .. with difference reaching 1M down 1 week ago ..

But are they only doing rough projection from Japanese data which are the only available one ? I start to wonder know if we should consider a tolerance of +/-10% or +/-20% in every HW estimation published. Still weird that we have around 3 millions of PS4 on transit and only 1,8 for the Switch.

I am not saying anything for the site or the data that is collected .. just it's that it would be best to have the exactly true data every time .. but we can't :/

We aren't trying to mislead anyone. We get a small fraction of data from around the world and our algorithm extrapolates the data. Once that is done I can go in and make changes to the data and can go back to previous hardware figures and make adjustments when necessary. We've been trying to me more transparent by saying with provide estimates.

okay, okay, I understand, I love vgchartz, I love the articles, the comparisons, the charts, continue with the amazing work

I just wanted to be in perfect world where we could get every week the exactly sales numbers for every company but .. we get them only once per 3 months .. and even not from everyone ( microsoft )

If we could get track 100% of the data from every region that would be great. We try our best to make our estimates as accurate as possible. Since the PS4 is down in the US and Japan the algorithm had a similar drop in Europe. With Sony's shipped figures it became obvious the PS4 in Europe was still going strong.

@trunkswd I just got an idea for new chart from you comment .. comparisons on every platform year on year but for the different markets. for example ps4 2019 vs 2018 (for the same period of time) but for US only, and then for europe only for example, and the same for xbox one and maybe switch

Where are the game sales charts? I loved them.

They are not published anymore because the possible estimation was becoming more and more irrelevant with now more than 35% of the game sales being from download, and these sales are not trackable. So VGCHARTZ only now publishes confirmed sales data from games publishers.

It was so good and enjoyable when you go in the site in 2010, or 2011 or 2012, it was so interesting, every game sales were there, the console sales were there and were most exact I think, it had more thinks overall and the generation was much more interesting with PS3 and 360