Iratus: Lord of the Dead Preview - In the Shadow of Darkest Dungeon - Preview

If you enjoyed Darkest Dungeon, a hardcore dungeon crawler RPG blended with roguelite elements and topped off with turned-based strategic combat, then you will likely be keeping an eye on Iratus: Lord of the Dead. If you’re not, well, then you should be. After a successful Kickstarter campaign, Russian developer Unfrozen recently unleashed Iratus into Steam Early Access and I got a chance to check it out for myself. Even though it's planned to stay in Early Access for at least nine months, Iratus already shows a ton of promise and will surely give Darkest Dungeon fans something to tide them over before the sequel arrives. 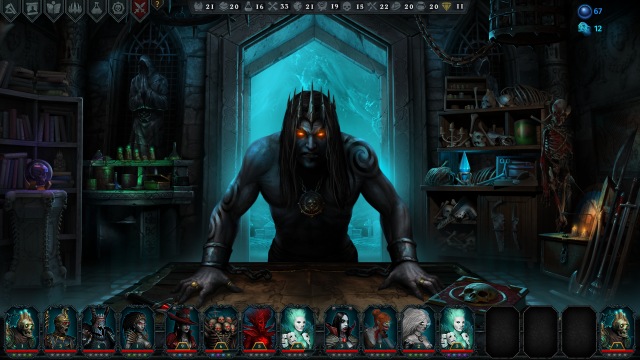 The developers at Unfrozen are unabashedly inspired by Darkest Dungeon. At first glance, Iratus plays and even looks like its source of inspiration. Pay closer attention, though, and the twists and changes are more pronounced. Most obvious is the fact that you control Iratus, a Necromancer recently freed from imprisonment who yearns to restore his previous glory. To do this, Iratus uses his necromatic powers to raise an army composed of a host of nightmarish warriors, including skeletons, death knights, and banshees. In order to do this, resources in the form of harvested body parts from your fallen enemies are required. As you complete certain tasks, more powerful minions become unlocked.

Each type of undead warrior you raise requires a combination of four different body parts as resources. As enemies are defeated, you’ll acquire what you need to create them. You can name your minions if you want, but it’s actually best not to get too attached as they likely won’t be alive for long. Each minion has six different skills and certain skills can only be used when they stand in a specific position in your party. Multiply the skills each minion has in a party of four with the many types of minions you can create - with more coming throughout Early Access - and the combinations are staggering, which encourages experimentation. 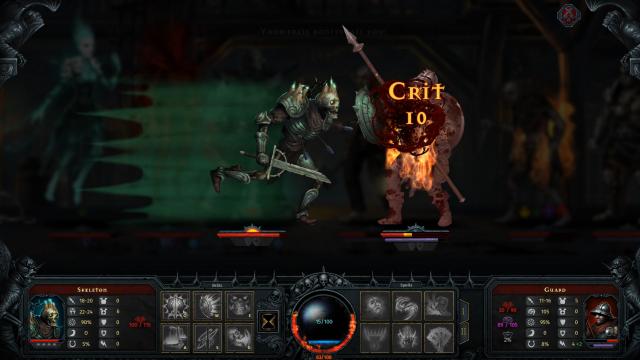 You’ll need to use these combinations of skills in order to be successful in combat because Iratus is a punishing game, maybe even too punishing at this point in time. Like Darkest Dungeon, combat takes place on a 2D field and is turned based. Where other RPGs can make you feel pretty powerful, Unfrozen seemingly prides itself in making you feel as if you’re in constant danger. The margin for error is extremely narrow, even on normal difficulty. As mentioned earlier, your minions are expendable. Even higher level ones tend to be eliminated on a regular basis.

Constantly losing your minions gets quite frustrating over time, so Unfrozen tries to mitigate this by having enemies drop brains periodically. Giving brains to minions instantly levels them up to the corresponding number of the brain and, as they level up, you can make their skills more powerful. You can also make newly created minions more powerful by using Alchemy to mix specific body parts together to give bonus stats. Despite these efforts, death of your minions is more an expectation than a rare occurrence. Run out of minions, along with the parts to create new ones, and your run ends in defeat. 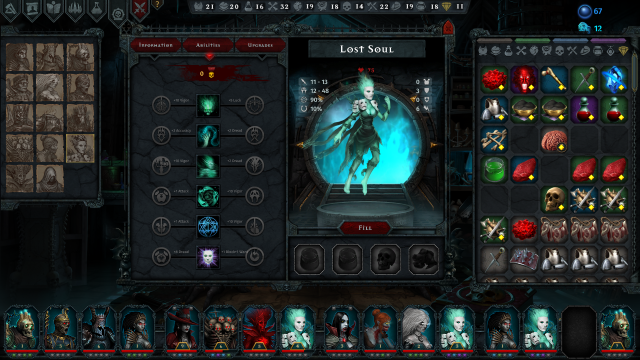 As Iratus, you can support your minions through skills you learn as you level up and invest points in the talent tree. When used wisely, these skills can turn the tide of battle and provide you with even more options. You can also support your minions by sacrificing them in order to create various buildings in your graveyard. Putting minions in the buildings will provide boons like extra experience, mana and health regeneration, and higher odds of collecting body parts and artifacts. As you can tell, there are many systems at play here and they mesh well together to nail that Darkest Dungeon vibe with unique twists.

Iratus’ parallels to Darkest Dungeon continue with the presentation. Graphics are 2.5D, dark, and grim. Character designs aren't as charming as those found in Darkest Dungeon but are instead more gritty and oppressive, which works well for the most part. Animations are a mixed bag. Some are well done but others are pretty boring. What's cool, though, is that each of the six skills for every type of minion is accompanied by a unique animation. Still, there is plenty of time for Unfrozen to polish things up before full release.

Perhaps what needs the most work at this time is the balance. I get that Iratus is a roguelite but currently some runs feel impossible. Seemingly, no matter what you do you're doomed to fail. The only thing that remains unlocked when you do fail is the types of minions you can create. Everything else requires you to start from scratch. This wouldn't be too big a deal but runs actually last hours, unlike roguelites like Rogue Legacy and Spelunky that get you back into action relatively quickly. There are only three levels available now, but successfully completing even one can be quite a feat. To its credit, Iratus does have that one more battle feel to it and if it can tread that line between fun and challenging then Unfrozen may just have something special in the works. 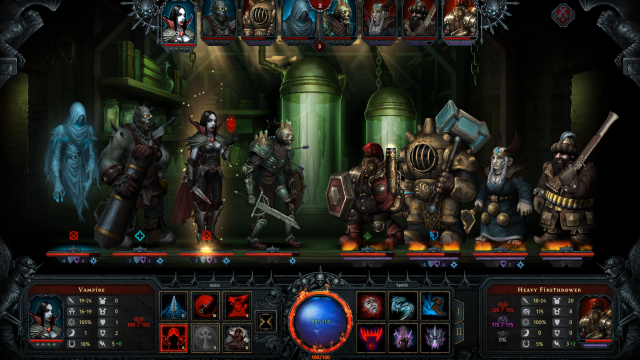 Early Access titles are a mixed group. Some stay there for only a short amount of time and launch as worthwhile titles. Others stay there for years until they're ready. Finally, there are those that never seem to leave. Fortunately with Iratus, Unfrozen seems poised to deliver a game that should give dungeon crawling fans hours of enjoyment. Even with ten hours played, I feel as if I have just gotten into it and that there’s a lot more to see and do. Most importantly I'm eager to continue. If Unfrozen can continue to polish up its strengths and address its shortcomings, Iratus: Lord of the Dead may very well prove itself a worthy heir to Darkest Dungeon.

Iratus: Lord of the Dead