Zelda Replay Part I: The Legend of Zelda - Article

Part I: The Legend of Zelda
"It's a Secret to Everybody"

In a series two episode of Doctor Who, the Doctor responds to the Face of Boe's mysterious words by saying, "That is enigmatic. That is textbook enigmatic." As I sat playing The Legend of Zelda, the premiere adventure in the evergreen series of the same name, I thought of this quotation a lot. The Legend of Zelda, after all, is a mysterious, borderline baffling game. From its beginning, which drops an under-equipped would-be hero in the middle of nowhere, to its final showdown with Ganon, a fight that demands a hard-to-find powerful item—a fact advertised only in the game manual—the seminal action-adventure title refuses to be straightforward, unambiguous, or forthcoming with its many secrets. If you wish to survive its subterranean gauntlets, deadly combat, head-scratching riddles, and general opacity, you'll need to figure it out for yourself. This is a game that must be earned, ultimately, through hard work, patience, intelligence, and a healthy dose of trial and error. 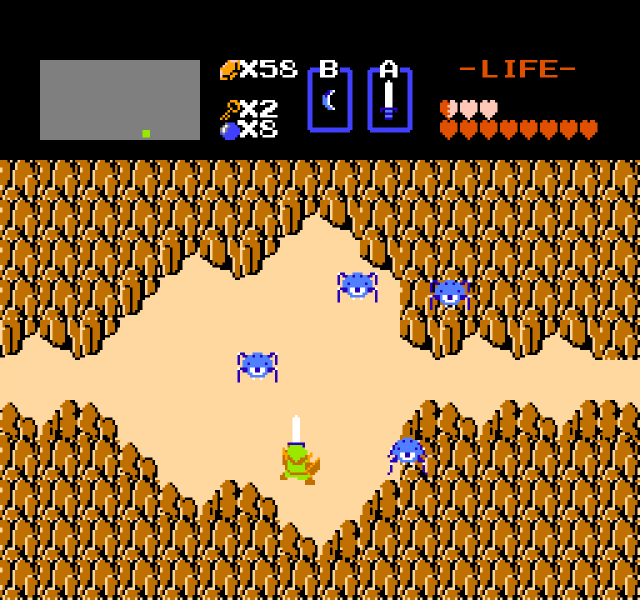 The Legend of Zelda is beloved for many reasons—for changing the rules of console gaming, for codifying the mechanics and gameplay loops of the action-adventure sub-genre, and for kick-starting what is arguably the finest video game series of all time—but I'd wager that above all else its enigmatic, aloof nature keeps it firmly in the hearts and minds of fans, more than three decades later. It's a difficult, sometimes exasperating experience, yes, but in all the right ways.

It's also a great-looking, great-sounding action adventure title with a satisfying, seamless mix of arcade action, cRPG dungeon-crawling, and adventure-style puzzle-solving. By marrying the open-ended, methodical gameplay of pen-and-paper role-playing games like Ultima and Wizardry with the arcade sensibilities that made Nintendo a household name in the 1980s, The Legend of Zelda achieves a near-perfect blend of short-term and long-term objectives and rewards. As the hero Link, players will face immediate, tactile challenges like escaping from a locked room full of Gibdos (mummies), and prolonged, cerebral quests like the hunt for the Power Bracelet or Magic Sword. 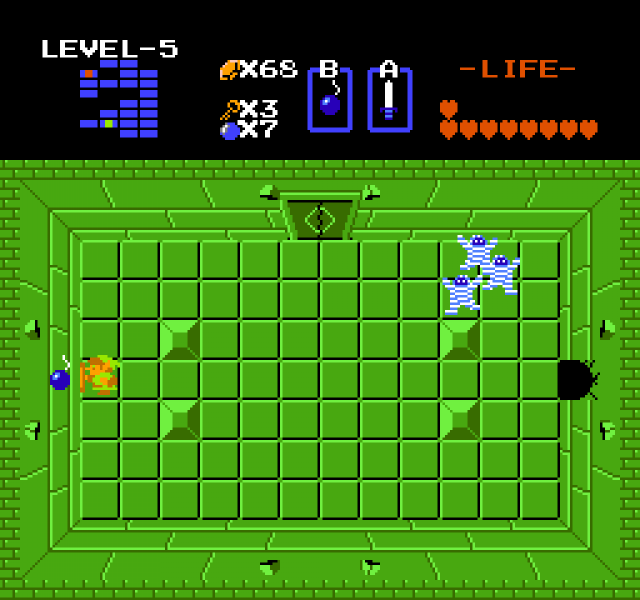 The Legend of Zelda, then, is stimulating on both physical and mental planes. It's equally affecting on a psychological level. Playing through the ground-breaking game is a powerful emotional experience, even in 2019. The map, which seems to go on forever, creates an atmosphere of limitless adventure. Its subterranean dungeons, far-flung secrets, and riddle-dispensing sages summon a feeling of discovery and intrigue. Even the Old Man's warning—"It's dangerous to go alone. Take this!"—is intoxicating. Producer and co-director Shigeru Miyamoto modeled the game after his boyhood experiences exploring the fields, woods, and caves outside his native Kyoto, and that sense of childlike wonder and danger lingers, 33 years later. "I wanted to bring that sense of adventure to a video game," said Miyamoto.

Layered over that sense of adventure are some great melodies—including the immortal overworld theme, which should trigger Pavlovian responses in even the most casual video game fans—and spectacular sound design for the era. Whether it's the whoosh of a sword, the whipping of a boomerang, the clink of a collected rupee, the muffled explosion of a bomb, or the low, plaintive growl of a boss creature in the next room, The Legend of Zelda hits all the right notes. 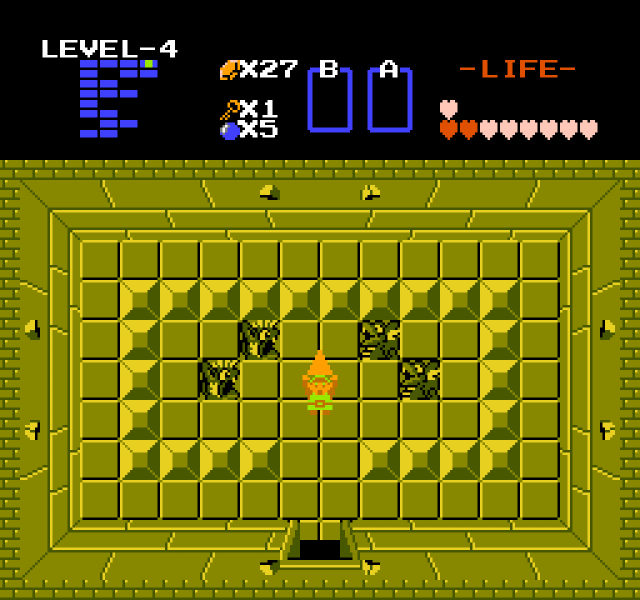 Despite its stellar gameplay, atmosphere, and sound design, The Legend of Zelda isn't flawless. It can be painfully difficult, particularly in dungeons six through nine, and too obscure for its own good. Moreover, the game's graphics engine will buckle when there are too many enemies and special effects on screen. Run into a pack of Lynels firing beam projectiles all over the place and expect the normally smooth action to transform into a slide show.

The Legend of Zelda is textbook enigmatic. It's mysterious, difficult, and secretive—sometimes to a fault. It will challenge your reflexes, your wits, your courage, and your patience. It will open up for you a world of heroes, monsters, dungeons, and dragons. If you are up to the task and worthy of the legend, it will deliver a physically-taxing, mentally-demanding, emotionally-powerful adventure that transcends the limitations of the 8-bit era. As the Old Man says, "Master using it and you can have this."

1. The Legend of Zelda

This is still my favorite game of all time. I can say that it is only enigmatic if you weren't playing it during the late 80s (or you forgot what that was like). Out of context this game can seem dated and enigmatic. If put into context, the game is amazing, flawless and competes with Super Mario 3 as the best NES game.

At the time, Zelda 1 pushed a lot of boundaries. It was the first game where you could save your progress. It was the first game to merge the arcade and PC together to make a unique genre: the action RPG. It was much bigger than any exploration console game that came before it. It did all of these things while having amazing exploration, countless secrets, exciting dungeons, tons of unique items, and fun combat that never got old. On top of that the game is highly replayable. I can't think of another game that both broke lots of new ground while being executed so flawlessly at the same time. This puts Zelda 1 into a tier all on its own.

If this game where to be made in today's context it would look something like this: start with Breath of the Wild, then make all of the dungeons as good as Hyrule Castle, then make the combat as exciting as Hyrule Warriors, then add in all of the features of an Animal Crossing game. Lastly make the overworld and dungeons completely random like a roguelike, but every iteration is still as good as the standard Breath of the Wild overworld. If a game could do all of that today, then it would have the same kind of impact as the original Legend of Zelda.

I will say I have a newfound appreciation for the game after this replay. It’s shockingly modern. Upon playing it this weekend I was reminded of several recent Rogue-like and Souls-like games, not to mention the legion of action-adventure games that use its formula as a template. I will insist, though, that it is an intentionally abstruse game—but that’s part of the fun!

I don't think it was as enigmatic or abstruse 30 years ago as it appears today. Thirty years ago the understanding was that a person would first look at the manual, which had a map and a ton of hints. Then there was also Nintendo Power and the Nintendo help line after that. The information to complete the game was always available, but it wasn't nearly as convenient as going to the internet. The game was made in that kind of context, which may be impossible to duplicate in a modern environment.

Ah I see what you mean. That’s a fair point. Manuals were a given in that era; indeed, the opening crawl of the game instructs players to “Please look up the manual for details.” There was also a communal element to deciphering games in the 80s and 90s. I’m sure many friends and family members tackled games like TLoZ together, to unravel its mysteries. That said, I do believe Miyamoto designed the game to be challenging and confounding at times; he wanted players to sweat it out. In an interview he spoke about the map that was included in the North American release of the game: “The maps included various hints, but to be honest, I thought it would be more enjoyable to play the game without any help.”

I love your comment!! This is my second favorite game of all time. I think BotW surpassed it.
In my opinion BotW combines the freedom and exploration of the original game and the exciting combat of Zelda 2.
However, BotW does lack good dungeons. Hyrule Castle should definitely be some kind of blue print for dungeons in future titles. Hyrule Castle is awesome!

I love your comment!! This is my second favorite game of all time. I think BotW surpassed it.
In my opinion BotW combines the freedom and exploration of the original game and the exciting combat of Zelda 2.
However, BotW does lack good dungeons. Hyrule Castle should definitely be some kind of blue print for dungeons in future titles. Hyrule Castle is awesome!

@Veknoid, yes I agree that the game was still meant to be challenging. By late 80s standards I feel that the challenge level was just right. By today's standards it's somewhat on the hard side.

@Valdney, BotW is definitely a great game for today's time. Zelda 1 is not a game made for this time, but for what the late 80s was wanting in a fantasy game. BotW is what a person wants in a modern fantasy game. Who knows what people will want 30 years from now? I do agree that BotW is the best game that has come out in the past few years, and it is also my second favorite Zelda, after the original NES one. We need more games like BotW.

Can't wait to read about the other Zelda titles.

The game that started it all!!!

This is the content we need. A great read btw ! WIsh you luck in your next adventures :D

fantastic read, you project your love of the title very well.

This replay review almost gives me the courage to get back to it and try to figure it all out without using a walkthrough.