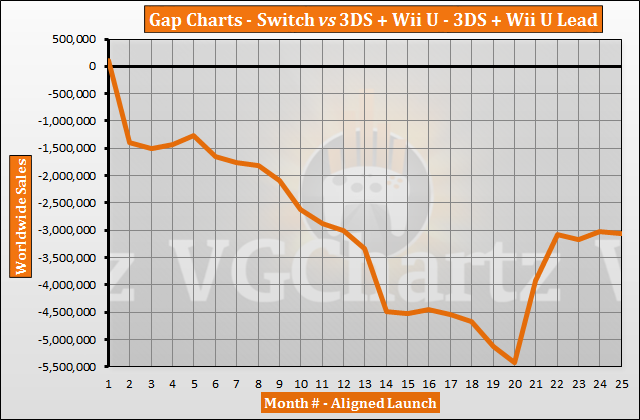 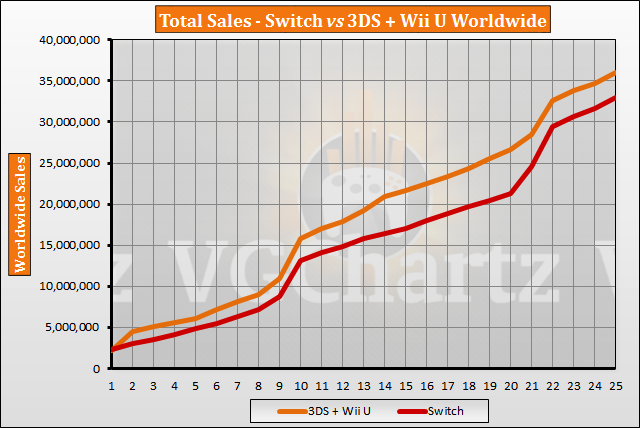 The 3DS launched in February 2011 (however, 3DS sales have been aligned to March 2011, since it only launched at the end of February in Japan), the Wii U launched in November 2012, and the Nintendo Switch launched worldwide in March 2017. The Switch has sold 32.94 million units, while the 3DS and Wii U have sold 35.99 million units during the same timeframe.

What makes this comparison interesting is that 3DS and Wii U combine for more system sellers than Switch during the same timeframe, simply because they are two separate consoles. And despite the additional advantage of multi-console ownership between 3DS and Wii U that Switch doesn't have, it's becoming visible where this comparison will be going. Month 21 and 22 align the second holiday season of the 3DS and Switch, and Switch reduced the gap by ~2.5m. The most recent month (25) is the start of Wii U's third holiday season (November 2014) and all it did was create a deficit of 33.8k units for Switch, so Wii U isn't contributing much in the big picture. The 3DS has one good year left in it, because Nintendo's top development teams focusing on Wii U from 2013 to about mid-2015 took its toll on the sales pace of the 3DS. Meanwhile, Switch is now finally past the point where Nintendo supported two consoles, because the 3DS in 2019 won't get any more Nintendo games. This stacks the odds in the Switch vs. 3DS + Wii U comparison very much in Switch's favor. Not only will the gap be closed by the end of year 3 in the comparison, but Switch will pull away at great speed from year 4 onwards.

And that's not even mentioning the pricecuts of 3DS and Wii U, while the Switch didn't have any permanent one, yet.

Makes it all the more puzzling that there are so many people who believe that Switch won't sell more than 100m. 3DS and Wii U combine for ~90m and if Switch beats that (and it will, because it's on track to do it with much more favorable circumstances in the long run), it's not far to 100m from that point.

People believe that Switch won't sell more than 100m, because they haven't really thought about it in any sort of objective manner. The biggest mistake people make is they think Switch is a home console only. These people actually have no clue why the Switch is selling well, and they think the PS5 is somehow going to diminish Switch sales. When you think about Switch as a handheld, then 100m seems very reasonable.

First off, the author of these sales comparisons does not attempt to provide any analyses. It's a simple presentation of numbers compared to a multitude of other numbers. What those numbers mean is up to the people to decide. These comparisons are nothing more than a starting point for an analysis. This particular comparison here can answer the question if it was a good or a bad idea of Nintendo to combine home console and handheld console into one device.

Secondly, Switch's nature means that any comprehensive analysis must do more than address the home market or handheld market, so a Switch vs. 3DS + Vita comparison wouldn't be particularly good either.

The type of chart a person makes determines what kind of analysis you can do. Someone could make a Switch vs. Atari 2600 + Sega Game Gear chart, but it wouldn't be terribly helpful because that's just a bunch of random data thrown together. This chart is not much better. (At least the two consoles are from the same generation.)

Secondly, if these charts actually were doing a "comprehensive analysis", then there would also be a Switch vs. Vita + PS4 chart, and a Switch vs. Vita + 3DS + PS4 chart, and so on. But there is only a Switch vs. 3DS + Wii U chart. This suggests whoever makes this chart thinks this is the only valid comparison. Some people seem to think there is a "Nintendo market", that Nintendo only sells to the same people it sold to last generation. This thinking is nonsense. There is no "Nintendo market" or "Sony market". There is a home market and a handheld market. People can choose a different console going into a new generation.

They don't believe that the Switch will sell over 100M because they think sales will drop down like those of the Wii or the 3DS, that the console would be frontloaded, or that the next gen consoles would cut off the Switch's legs, neither of which seem logical to me.

About the chart here, I'd say they could throw in the Vita for good measure, since Sony doesn't bring out a successor to it. As such, the Switch is de facto a successor to all 3 of those devices.

So, Switch is already selling on par with 3DS+Wii U despite 3DS still selling very well at that point? Doesn't look like they're going to be able to fend off the Switch for long anymore.

3DS and Wii U combine for ~17m in year 3, but only ~11m in year 4. So the comparison will be pretty close by the end of year 3, afterwards Switch will emerge as the clear winner.

It's all downhill for Wii U from here, and next year it'll be downhill for 3DS as well. At that point Switch will likely have well over 50 million and still have a year before it peaks.