From Bertil Hörberg, the man who brought the world the short but sweet Gunman Clive, comes Mechstermination Force, a side-scrolling shooter that's two parts Contra and one part Shadow of the Colossus. Boasting satisfying run-and-gun shooting, fetching cartoon graphics, and some of the most imaginative boss fights of the generation, it's a game that will speak immediately to old-school Konami and Treasure fans, as well as speed-runners and high score hogs. The game isn't flawless—its hub area is undercooked, its final boss battle a headache, and, like Gunman Clive, it's on the short side—but its smooth gameplay, slick graphics, and memorable boss battles go a long way.

The story in Mechstermination Force isn't important; it's merely a pretext for some mech-crunching action. When an army of "MegaMechs" overpower all Earth governments and take control of the world, a small team of soldiers assembles to fight back and save the day. There are some colorful characters and amusing dialogue in the game's hub area, but in general this is a title that's action first, story second. 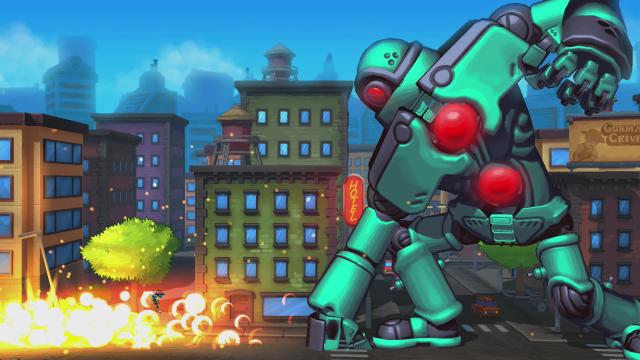 That action is top-shelf, thanks to accessible controls and smooth shooting mechanics. While the game's boss rush sensibilities lean toward Shadow of the Colossus, its run-and-gun formula is firmly in line with Contra or Gunstar Heroes. Just like those games at their best, Mechstermination Force features responsive inputs and blistering action. Each of the title's four playable heroes has only a handful of commands—run, jump, shoot, aim, and, later in the game, climb and double jump—but by nailing the basics Hörberg frees himself up to experiment with a spectacular collection of multi-stage boss battles.

If you're going to craft a game that's essentially a boss rush mode, you better deliver terrific boss encounters. Luckily, Mechstermination Force delivers over and over again, with 14 boss battles that are huge in scope and creativity. Well, make that 13. For all its successes in pacing and steady, incremental upticks in difficulty, the game commits some rather grave sins with its final boss. One, it's exponentially more taxing than any other boss fight before; it wouldn't be uncommon to spend as much time trying to best it as the 13 others combined. Two, it introduces mechanics so different from the base game they might as well belong to a different genre. 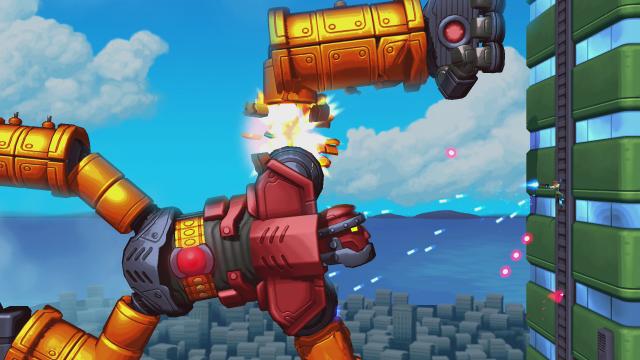 While this final boss is an unfortunate way to end a game, it is but one of 14. The other 13 are extraordinary—metal titans with several phases, stages, or transformations each. As with Fumito Ueda's cult classic, players will scale individual MegaMechs in order to target weak points. Some are built like traditional mechs, others arrive in the shape of snails or centipedes or monkeys. Physically imposing, structurally inventive, and ripe with opportunities for tense action-platforming, almost every boss is a triumph.

The only downside, and it's something that troubles most games that rely solely on climactic battles, is that there's not much build-up before each showdown, and there's very little connective tissue binding the experiences together. Mechstermination Force features a hub area of sorts, with several entertaining NPCs, a shop that sells hearts and weapons, and a console from which players can replay completed boss fights for high scores, but it's not a replacement for a more traditional action game cadence. 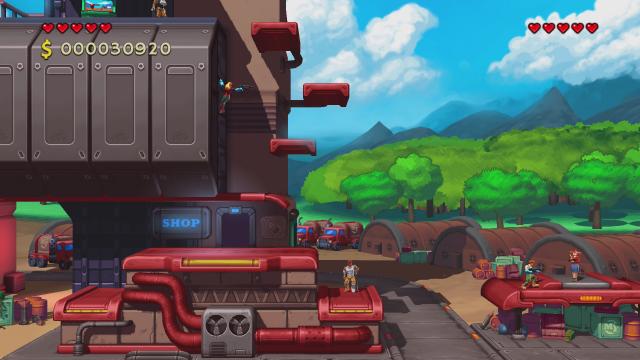 Mechstermination Force is a brief game—each boss can be dispatched in under five minutes once you've deciphered its tells—but it owns a few features to stretch out its running time. The first is the previously-mentioned console, which allows players to revisit old bosses to earn stars for taking zero damage or finishing under a certain amount of time. The second is local two-player co-op, which is great fun with a friend.

Whether played solo or with a friend, the game looks bright and colorful, like a Saturday morning cartoon. Built on top of a custom engine and featuring 60 FPS action, it's one of the slicker indie action games on Switch. It's not the most technologically demanding title, but stable performance and a consistent art direction are sometimes more impressive than cutting-edge graphics. 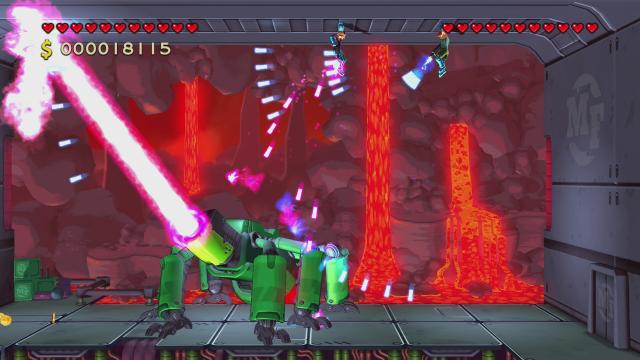 Even in an industry where the most unlikely genres and properties mix—remember we live in a reality where Tetris battle royale is a thing—Contra and Shadow of the Colossus is an inspired marriage. Mechtermination Force's mid-boss interludes need work and its final boss requires retooling, but its silky gameplay, bright graphics, and stellar MegaMech encounters make it required playing for fans of run-and-gun action.

This review is based on a digital copy of Mechstermination Force for the NS, provided by the publisher.