With the full release of Fallout 76 at hand, I thought I might share my impressions of the game based on my time with the Beta.  Full disclosure – I’m a huge fan of the Fallout series and I’ve always thought a cooperative multiplayer option would have been an awesome addition to the series.  In my opinion, having the ability to have a single friend tag along with you would have been sufficient, but Bethesda has gone from pure single player to an online-only experience with Fallout 76.  After playing the Beta, however, all I can say is that you “beta” not buy this game. 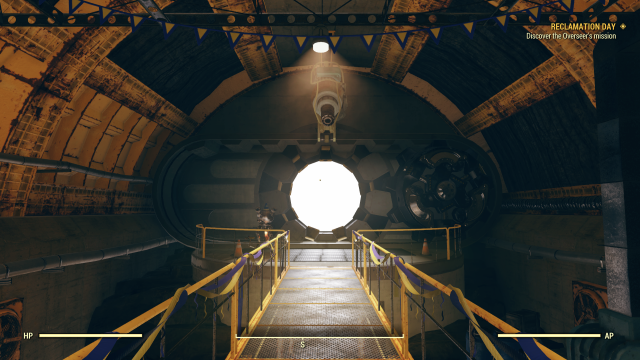 Bad jokes aside, the extreme shift from a deep, narrative driven, single-player game with interesting characters, situations, and choices, has become a relatively hollow online-only experience.  The base Fallout (namely Fallout 4) experience is there, with only minor additions and changes.  When I began the game in the quasi-titular Vault 76, I immediately felt the wonder and intrigue that every Bethesda-published Fallout game has elicited in me.
This initial atmosphere oozed a certain titillation and, as I exited the vault and the excellent lighting effects of the sun broke through the trees in front of me, I was excited for what was to come.  While the graphics are seemingly identical to those in Fallout 4, this isn't a problem for me but unfortunately my experience from this point on was a problem. 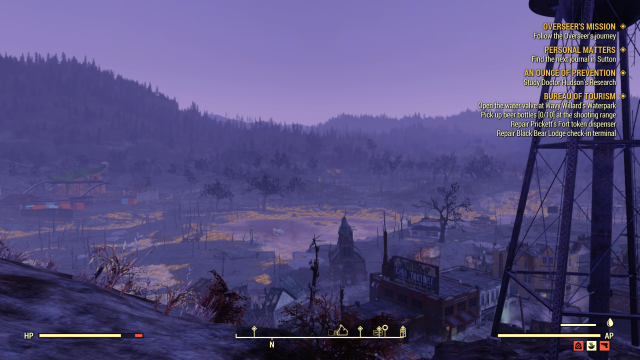 Bethesda deserves credit for thinking through certain aspects of the game design.  For example, it seems a lot of care has been put into the incorporation of PvP.  Essentially, PvP encounters can happen anywhere and at anytime.  However, initial and unanswered attacks deal significantly reduced damage.  Additionally, if you manage to kill someone who never hits you back, you will be marked as wanted, and become a target.  Death, whether from PvE or PvP, results only in a loss of your junk, which you can reacquire by returning the location of your death.  All told, this aspect works well in my opinion.
What didn’t, however, is the more general content.  The heart of Fallout games, for me, has always been the story, especially your ability to interact with and ultimately affect the world and its inhabitants.  That seems all but removed.  Now, as it was only the Beta, and I only made so much progress, I can’t say for sure that things don’t improve.  However, aside from enemies, NPCs are virtually non-existent.  Ostensibly, I was in search of one (that’s one of the main quests), and maybe you eventually find them, but for the mostpart you’re talking to robots, seemingly just to trade or fetch a quest. 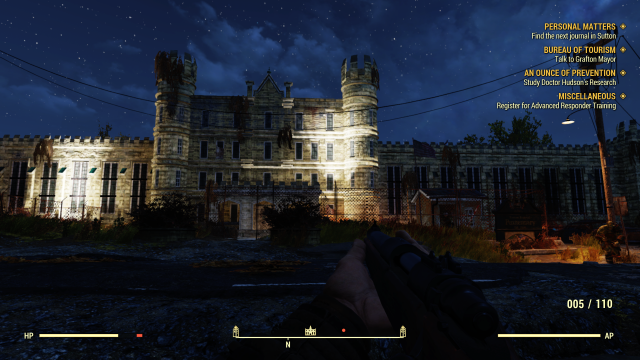 One particular encounter really captured my entire experience.  I received a quest to travel to a major city and meet the mayor.  To that point, the entirety of a narrative had been reduced to the aforementioned NPC robots and those neat little stories you can find on computers and hand written notes.  To be clear, I’ve always loved the latter in Fallout, but they aren’t sufficient to carry a story or drive a game experience.
Anyhow, I had a feeling that the mayor wouldn’t be there or something, and I’d be left still waiting for a truly compelling story element to unfold.  I got to the mayor’s office and (minor spoiler) the mayor is a robot… with a fetch quest for me. Its second line to me was “I bet you didn’t expect a computer to be Grafton’s Mayor.”  Only I pretty much did.
As it is, no Fallout game has ever so accurately portrayed a wasteland, namely in how empty and pointless it feels.  The looting, grinding, crafting, and combat have never been the primary drivers for me in this beloved series.  They’re fine, especially as part of an overall interesting narrative experience.  However, those now seem to be principal elements of the game.  Inexplicably, Bethesda seems to think that its narratives can be replaced by interaction with fellow gamers, but “do you have a mic” or “help”, especially repeatedly, just don't do it for me. 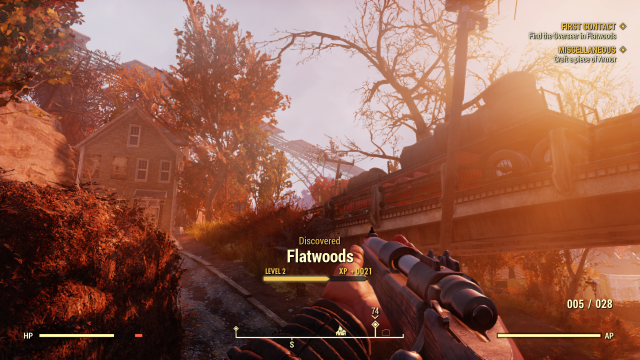 Brandon J. Wysocki is a writer for VGChartz.  You're invited to comment on his articles or contact him on VGChartz via private message (username SpaceLegends) to give him the attention he desperately seeks.

Yeah, I mean, I'm sure there will be people who love what this game offers. Judging from what I've been reading about the beta, it's clear that this is exactly what some fans wanted. It's not what I wanted, though--in fact, it's the opposite of what I want in a Fallout game.

I actually have little problem with the lack of NPCs. I can deal with that. I care a lot more about exploring a dangerous wasteland than about repetitious settlers and townsfolk. It's having to deal with other players that I want no part of. Immersion is important to me, which is pretty much impossible to enjoy while someone else is spamming emotes or trying to chit chat.

But player interactions are so scarce that what you described is barely a real issue. Aside from the starting zone which obviously has more people around, you rarely get to interact with players unless you are actively looking to do so, much less to the point of getting "spammed" like you said.

@Mordred - so, as someone who hasn't played the beta or really followed this game's development but who has played all of Bethesda's other Fallout games, what do people mostly do in the game, if it's not story-based nor player-interaction based? Quests for robots, per this preview? And building settlements as in Fallout 4 (not something I ever bothered with)? Is that it?

as of right now, exploration and finding loot+lore is the main draw of the game. Player-interaction is not the best as it currently is, but there are still world events in the game that people can join at any time by opening the map and fast-traveling to them. They've stated they will work on constantly adding such events and there is a faction-based PvP mode coming. There's no such thing as a settlement like there was in fallout 4. You have your camp and that's your own little space where you can build your stations for several purposes + decorations/cosmetics if you're into that, but they said they are working on it so who knows what it will be like in the future.

Yeah, Pokoko, for me, there just wasn't much to immerse myself in. I'd sooner recommend playing through a previous Fallout game than buying this. I hope there is more depth to the story and lore than I saw, or that more is added, but it is a major concern for me. It isn't too difficult to ignore or avoid unwanted players in the game, but then there's even less to do, and seemingly still no reason to do it.

Ah, another impression that starts off on the wrong foot, which is playing this game expecting it to be Fallout 5. Most of your complaints are facts that were presented to you and everyone before we play the game, so why do you play the game expecting something else? Fallout 76 will be a game as a service and this impression omits already confirmed future content that is faction-based PvP deathmatches, additional vaults opening up under the form of dungeons and more. So yeah, don't give this read much credit "before you buy".

I appreciate where you're coming from, but I didn't go into expecting this to be Fallout 5. I did expect some substance. This feels like some emaciated fan made mod or something. It sounds good enough on paper, but, thus far in practice, it's totally lacking substance. Or substance that I'm interested in. As I said, without a compelling narrative, the other aspects of the game just don't do much for me. So, that being the case, where's my impetus to play? 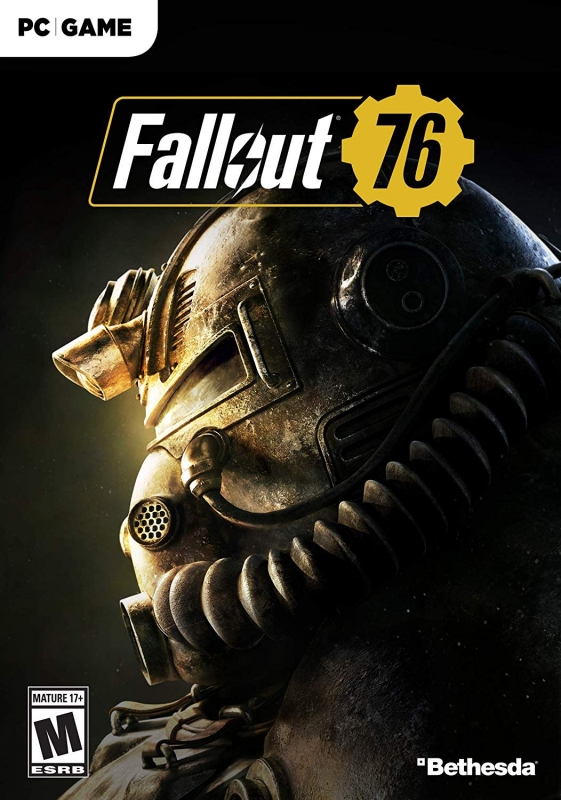 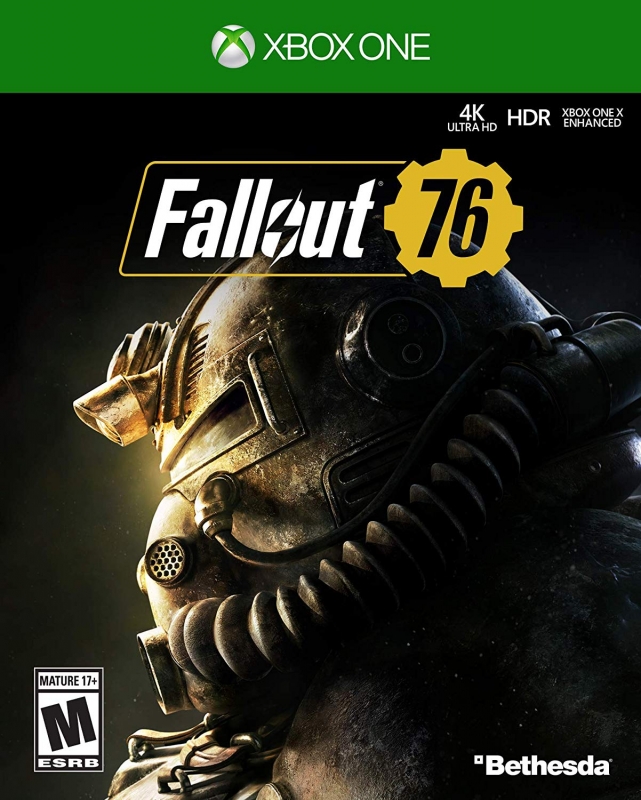