As a rule, Japanese indie games receive less publicity and praise than their western counterparts. While Astebreed, a flashy, alternating-perspective shoot-em-up, might not reverse that trend—it’s been around for four years, after all—it stands as undeniable evidence that low-budget, low-profile studios in Japan are capable of producing generational greats. Yes, Astebreed, the game you’ve never heard of, is a masterclass in arcade action; a space shooter that, thanks to amazing production values, gratifying gameplay, and high replay value, can go head to head with the best of the genre.

Unlike a lot of shoot-em-ups, or shmups, Astebreed insists on telling a meaningful story. Set in the future, when a united Earth government has colonized Mars and run afoul of a warlike alien race called the Filune, the game revolves around Roy Becket, a young pilot. Secure in his mech fighter and accompanied by a girl who, having suffered experimentation at the hands of the Filune, possesses otherworldly abilities, Roy joins what’s left of Earth’s fleet to strike decisively into the heart of the alien menace. There are shades of sci-fi classics like Ender's Game here. 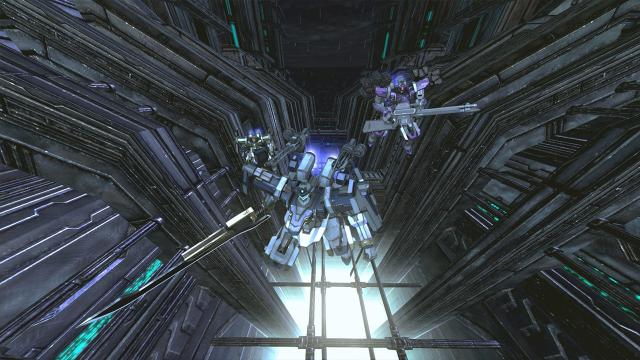 Narrative is important in Astebreed, from beginning to end. Before players even sniff the main menu, the game deposits them in a prologue, which follows the tragic adventure of Roy’s adoptive father. Moreover, Arrange Mode—the preferred, console-specific campaign mode—starts and culminates with a beautifully-rendered storyboard cutscene. Finally, each of the game’s six levels is peppered with dialogue, although this points to one of the shooter’s few flaws: voiceover work is Japanese only, and English subtitles are virtually impossible to read in the thick of battle. The developers at Edelweiss mitigate this design flaw with a timeline, accessible in the Extras menu, which captures events before, during, and after Roy's exploits, but the great majority of dialogue is lost in the mechanical demands of the game.

Those mechanics, and the gameplay scenarios that surround them, are absolutely brilliant. Arcade shooters have been around for decades—titles like Space Invaders, Asteroids, and Galaxian laid the ground work in the 1970s—but rarely has a game in the genre experimented with so many fighting styles, camera perspectives, and score multipliers as Astebreed. It's a game that takes the best of horizontal, vertical, and 3D rail shooters, combines it with mech melee combat, and wraps it all in a replayable score-based package. 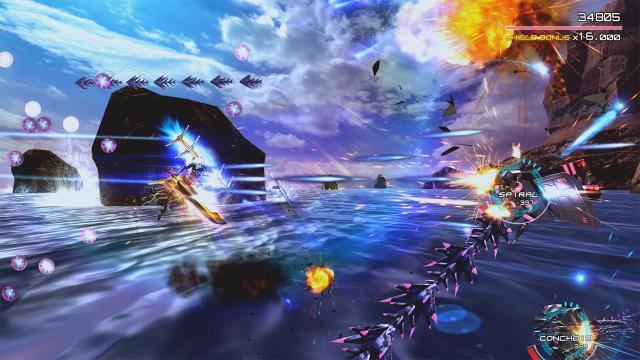 Let's start with the basics. The Xbreed (Roy's starter mech) has several offensive moves. The primary function is Lucis Shot, a spread projectile attack. This will destroy low-level enemies and purple bullets. Roy can also use Lucis energy in a homing lock-on attack, in either spherical or conical patterns. Press down on the right stick to create a large circle around Xbreed, and any rival vessels unlucky enough to be caught inside will be tagged; let go the right stick and off go the Lucis bolts. Players can also direct the homing attack more narrowly by rotating the right stick. Here's where it gets interesting. By holding the lock-on attack longer, you'll tag the enemy with more Lucis energy—which means a stronger homing attack but fewer available slugs for Lucis Shot. Also, spherical lock-on, while covering more real estate, fills the lock-on gauge more slowly than the conical variety.

Lucis attacks are only half the battle, though. Xbreed also sports a giant blade—extremely powerful but useless at long range. Players will deploy this blade in three ways: a single swipe with the R button; a blade attack combo with the R button held down; and a blade dash attack, which allows Roy to glide through unblockable red bullets with the left stick and the L button. Pro tip: you can fire Lucis Shot and use the blade simultaneously. 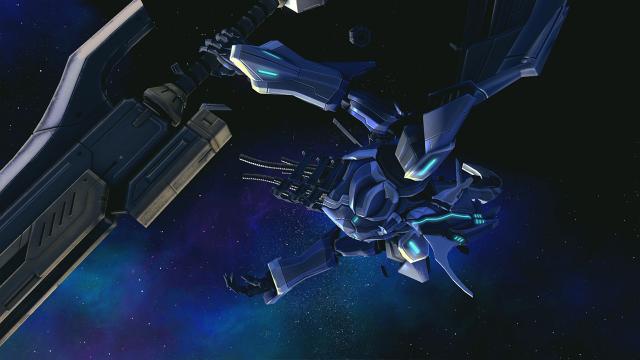 Finally there are EX moves. As Xbreed fights and destroys enemy bullets with its blade, a yellow EX gauge will fill. Once it's at 100 percent, players can launch three powerful attacks: a Spin EX Attack, which destroys enemies in a sphere around the mech, and generates a barrier granting temporary invulnerability; a Dash EX attack, which will launch Xbreed at all locked-on Filune ships; or Wild EX Attack, the strongest move in the game, which requires a single, fully locked-on enemy (this one is great for bosses).

All of these projectile, melee, and special moves, when combined, make for some incredibly fun, amazingly deep combat. There's nothing quite like taking out an entire fleet of tiny Firune fighters with Lucis Lock-on, then carving up larger capital ships with a flurry of blade strokes. What's more, nimble controls and plenty of on-screen prompts—Xbreed's Lucis energy is represented by blueish orbs around its mechanical frame, and a glowing yellow outline signals a full EX meter—mean you'll never get lost among the celestial chaos, nor will you fumble looking for the right command or cue. In fact, despite its medley of mechanics, Astebreed is surprisingly user-friendly, for vets and for shooting rookies. 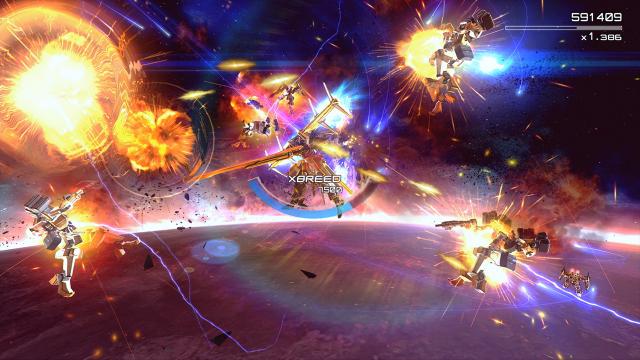 Its accessibility springs from a few things. One, players can lean on Xbreed's sword attack to destroy most enemy bullets and play offense and defense simultaneously—even though it means a lower score (more on that to come). Two, Astebreed provides a generous checkpoint system, so that a failure in the middle of level five, for example, doesn't mean a full restart (only a score reset). Three, the game supports three modes: easy, normal, and an unlockable hard mode. Fourth and finally, Xbreed has a recharging shield, which is a lifesaver in near-death situations.

There are many instances of brief down time when this shield can recharge, due to Astebreed's signature alternating-perspective flow. Where some shooters like Gradius or Ikaruga are content to settle into a single perspective, this game wants it all. In a single level, expect to play as a horizontally-scrolling shooter, a vertically-scrolling shooter, and a 3D behind-the-back shooter, in the way of Sin & Punishment. These differing perspectives, and the animated transitions that connect them, make Astebreed all the more interesting and mechanically-diverse, and, of course, give harried players a chance to breathe. 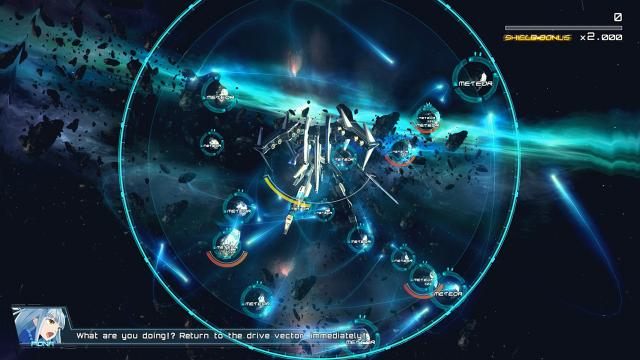 So, there are ways for inexperienced pilots to reach the end of the game, but fear not, shmup pros—there are also more challenging ways to succeed at Astebreed. Like any worthwhile arcade action title, Edelweiss' shooter is underpinned by a high score system. While there are no penalties or disadvantages to ignoring the scoring system—again, the game makes plenty of room for those who simply want to see the credits roll—the pursuit of high scores really is the raison d'être here. Players rack up points throughout the game by accomplishing several things, including dealing damage to enemies (marksman points), destroying enemies (destruction points), and obliterating enemy attacks.

Adding depth to this formula is the tension rate, which rises as you deploy Shot and Lock-on attacks, and depletes as you use blade and EX moves. Essentially, you fill your tension meter, which feeds into a score multiplier, by shooting down weak ships, then deploy blade and EX attacks to "consume" the tension against stronger enemies. You're able to push your high score further into the stratosphere during boss fights by earning marksman points and wiping out the overlord before a time limit expires. 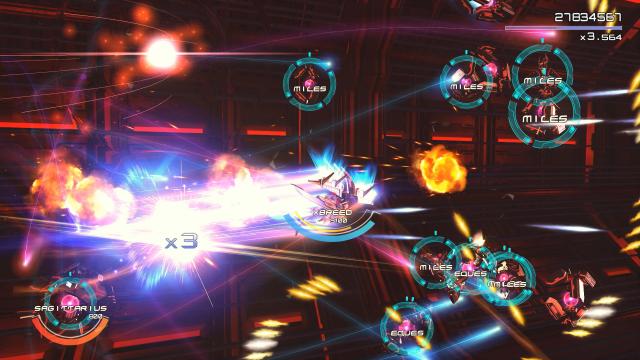 Furthermore, the game tracks high scores and tension rate in an EKG-like graph in ranked leaderboards—offline only, unfortunately—and offers 40 achievements for the hardcore (good luck trying to beat hard mode with no continues or with less than 50,000 damage taken). These benchmarks are critical, because Astebreed, like the great majority of its type, is a short experience. Its six levels could be finished in an afternoon. So, go in knowing that replaying the game for high scores and perfect runs is meant to replace a substantial single-player campaign.

Outside of leaderboards and achievements, Astebreed offers up several extras, including the aforementioned timeline, documents and character bios, demo scenes, artwork, and a nifty mecha model viewer, where mech heads can admire friendly and enemy ships in 360 degrees. 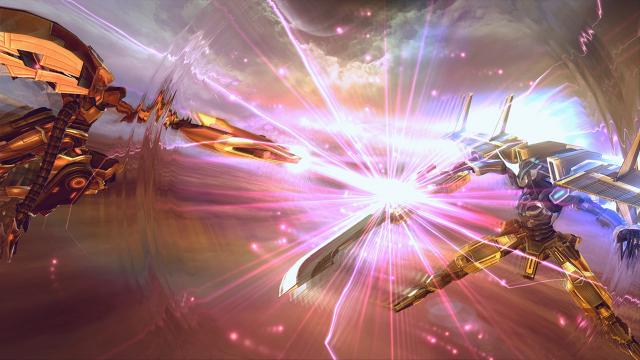 In addition to its collection of modes, mechanics, scoring systems, achievements, and extras, Astebreed sports some gorgeous graphics, breathtaking backgrounds, and impressive lighting and model work. It's just stunning. The game's OST is noteworthy as well, thanks to a collection of electronic and progressive rock tracks that seem torn straight from the 1980s.

If Japanese indie developer Edelweiss wasn't already on your radar, consider this your wake-up call. Astebreed is a new classic, a tour de force of arcade action, and an expert distillation of the rules, perspectives, mechanics, and themes that have defined shoot-em-ups for forty years. Absent online leaderboards and English voice-overs, and the brevity of the campaign, are the only pain points.

This review is based on a digital copy of Astebreed for the NS, provided by the publisher.

Gonna look into this title. A 9 is high praise.

Oooh, my interest is piqued 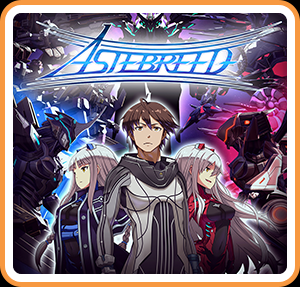