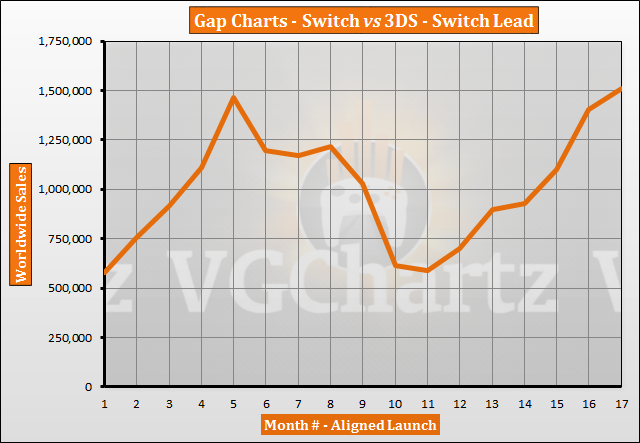 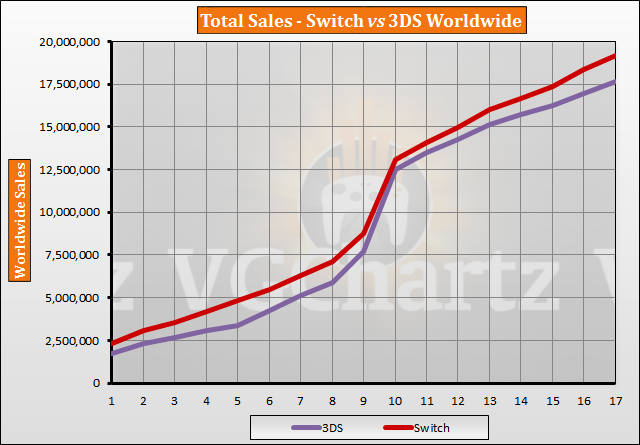 July 2018 is the 17th month that the Nintendo Switch has been available for. During the latest month the gap grew in favor of the Switch by 108,775 units when compared to the 3DS during the same timeframe and by 47,421 units in the last 12 months. The Switch is currently ahead of the 3DS by 1.51 million units.

The 3DS launched in February 2011 (however, 3DS sales have been aligned to March 2011, since it only launched at the end of February in Japan), while the Nintendo Switch launched worldwide in March 2017. The Switch has sold 19.15 million units, while the 3DS sold 17.64 million units during the same timeframe.

All the Switch needs is some cracking AAA announcements and it will leave the 3DS behind..

It'll be obvious after this holiday that the Switch will obliterate 3DS lifetime sales in the future, faster than some might think.

3DS is falling further and further behind. After this holiday season Switch will Smash the 3DS and will be way too far in front for the 3DS, who is already at it's peak by then, to catch up again

This is so far a pretty interesting fight. Switch pulled ahead, then you clearly see the pricecut and 3DS started to gain a little, but now into the second year for both, Switch starts to have the considerably better momentum. I think with Pokemon and Smash at the end of the year, the 3DS cannot keep up anymore.

Wow. Less than 50k gap change over a 12 month period. That's crazy that they've matched up for so long.

Only due to the 70$ pricecut the 3DS got after a couple months (first Switch graph peak). But that already isn't enough anymore and Switch has been winning the last 6 months straight, and I don't see a reason why that streak would be going to end anytime soon.

Lets not pretend 3DS had no major price cut and switch is still able to be in advance. Switch will destroy the 3DS from now on.

I mean, the 3DS was ancient technology when it came out. The Switch is not ancient tech. The 3DS had a buffer for price cut after Nitendo fleeced its die hard fans bought it for a stupidly absurd price compared to it's manufacturing costs.

3DS was sold at a loss for an entire year after the price cut would its wasnt really a "stupidly absurd price" based on the tech inside.

Sauce on that? Cause I really doubt they were losing on something they're now selling for under a hundred bucks.

That's the 2DS. Their 3D screen tech must be quite expensive to produce.

Well Mediggo, with that argument you could just as well say Sony were not losing any money early on with the PS3 considering it got sold later on for 200$, just a third of the price.

While the main SoC wasn't really impressive, you completely ignore everything else like the 3D screen, Gyro, NFC and so on. While they're not expensive on their own, but they add up. Would they have just released a more powerful DS, it wouldn't have cracked the 150$ mark - it's the additional hardware functionality that made the higher price.