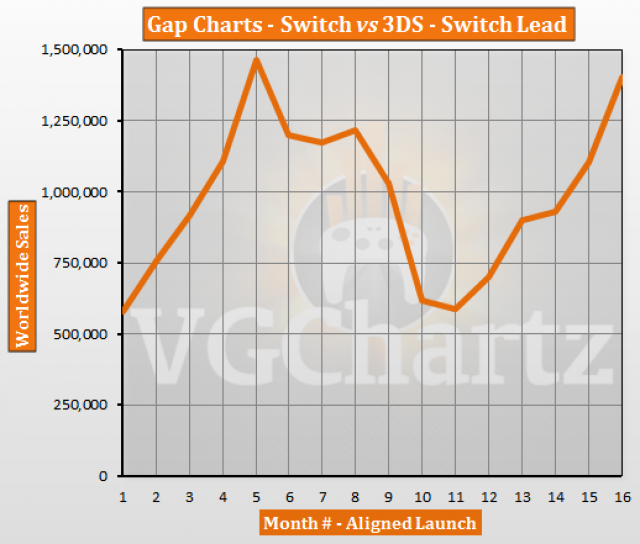 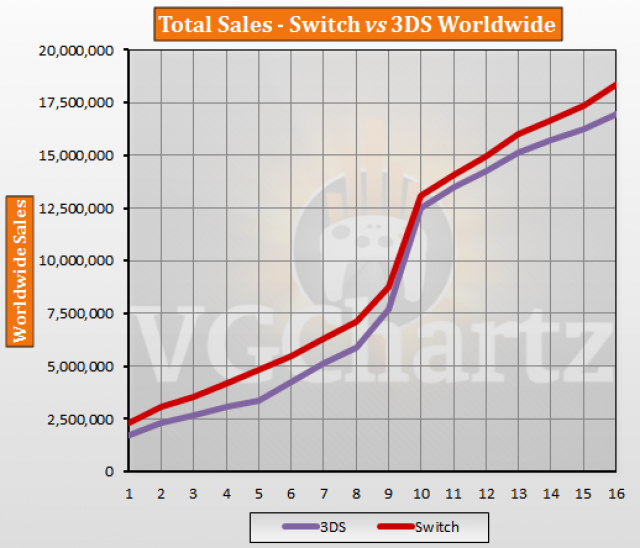 June 2018 is the 16th month that the Nintendo Switch has been available for. During the latest month the gap grew in favor of the Switch by 298,208 units when compared to the 3DS during the same timeframe and by 291,817 units in the last 12 months. The Switch is currently ahead of the 3DS by 1.40 million units.

The 3DS launched in February 2011 (however, 3DS sales have been aligned to March 2011, since it only launched at the end of February in Japan), while the Nintendo Switch launched worldwide in March 2017. The Switch has sold 18.35 million units, while the 3DS sold 16.95 million units during the same timeframe.

Wow, they are pretty much on one level. And considering Switch is much more expensive than 3DS was 7 years ago (after price cut), Switch is doing a pretty good job.

Very impressive for the switch. It still has a lot of potential with a price cut, big releases and a redesign to keep momentum high.

Very impressive for the switch. It still has a lot of potential with a price cut, big releases and a redesign to keep momentum high.

I think the gap will only grow from here. Switch has yet to get Pokémon and when it does, 3ds is history. I think switch has that 100 million console magic but anything could happen so let's see

We are past the price-cut and the first holidays, and Switch has the stronger momentum in the second year. As Switch not even fully tapped the handheld-market, I think it is safe to say that Switch probably will outsell the 3DS lifetime.

Switch will outsell 3DS easily. I just wonder if it will break 100 million like Nintendo wants. My prediction is still 80 - 85 million before the Switch successor launches.

Yeah, my concern is how Nintendo handles the transition as PS5 and Scarlett drop. Can go either way, depending on what tricks Nintendo has up their sleeves.

That'll depend on exactly when PS5 and Scarlett appear. If they appear Holiday 2021, I think Nintendo can hang on until Spring 2023, giving Switch 6 full years to itself, and time for Nintendo to create another hybrid, this time able to compete with the new systems rather than barely outpacing last gen's. If Xbox and PS5 release in 2020 or sooner, they'll be appearing just as Switch is getting its first midgen upgrade, and we'll just have to hope Nintendo doesn't panic and release a successor too soon, cutting Switch's legs short.

Even by 2023 a hybrid console won't be able to compete with PS4 Pro or One X, nevermind the next Gen consoles. It will be possible to beat the PS4 by then, but the Pro would most probably still be too much without taxing the battery life too much