If nothing else, Smoke and Sacrifice is unique. Set in a steampunk world inhabited by ghastly creatures and saddled with poisonous smog, it's an action game about survival, motherhood, and, more obliquely, the role of religion, industry, and class in society. With a promising premise, some luxurious hand-drawn art, and satisfying survival gameplay, the game mostly succeeds. Regrettably, some technical hiccups, tedious quest design, and inventory management annoyances show up to spoil some of the fun.

Smoke and Sacrifice tells the story of Sachi, a young mother who, as part of an ancient tradition in her village, must sacrifice her first-born child to the Sun Tree, the bright light of which protects the village from the elements and hostile wildlife. After she sacrifices her little one, Lio (in a tearful, moving scene), Sachi returns to her regular life. Years pass. Suddenly, a traveling stranger appears and informs the bereft would-be heroine that Lio lives, and that the mythology of the Sun Tree and the instructions of its priests are lies. So, Sachi steps onto the sacrificial dais and teleports to a smokey, dangerous underground world far below the sunny, idyllic village above. 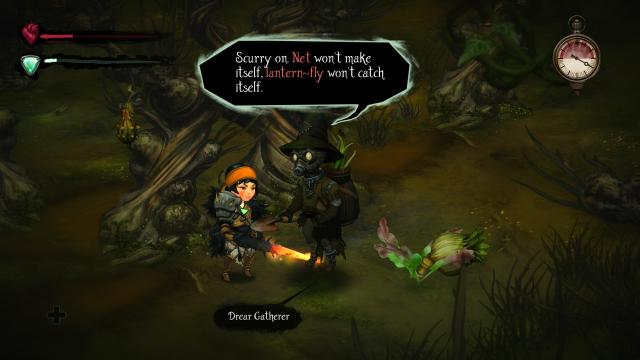 Developer Solar Sail Games has gone on record stating that in Smoke and Sacrifice it "wanted to combine a meaningful narrative with the challenges of survival gameplay." Judged against that goal, the game works. The narrative, with Sachi's quest for her lost child as the emotional linchpin and with plenty of subtextual commentary about the manipulative power of religion and the side effects of economic inequality, is provocative on both visceral and academic levels. The survival gameplay is similarly fascinating, although at times inconvenient and tedious.

The point of Smoke and Sacrifice, most broadly, is to survive. In the foggy, underground world, Sachi will cross several different biomes — swamp, tundra, industrial, etc. — each with its own climate, flora, and fauna. Using resources found in trees, hornet nests, rock formations, and animals, she can craft weapons to defeat more powerful enemies and armor to outlast the elements. One of the game's earliest quests involves an NPC encouraging Sachi to craft fur boots so that she can trek across frozen wastes uninjured. 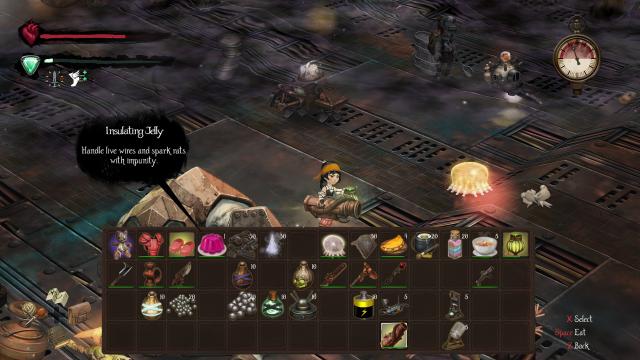 This gameplay loop — in which Sachi collects materials, crafts items, uses those items to access new areas and new quest-givers who request different materials and items — is effective for the most part. During her adventure she will discover or be gifted recipes, which transform common elements like rubber, quills, and oil into weapons, protective gear, lanterns (essential to survive the game's unique day-night cycle), and meals. Tracking down, claiming, and then preserving these elements (weapons decay and food spoils) will be your main focus.

There are dozens of small moments and minor victories that make Smoke and Sacrifice a rewarding game. Pushing into hostile territory once inaccessible is innately gratifying, and emerging from a battle to the death with a rampaging giant hog exhilarating. The game's environments — which are pre-determined, not randomly-generated like others in the genre — feel alive and chaotic, which makes traversal and exploration all the more interesting. It's not uncommon to see rival life-forms clash or interact with the environment in unpredictable ways. You might even see two members of the same species produce offspring. 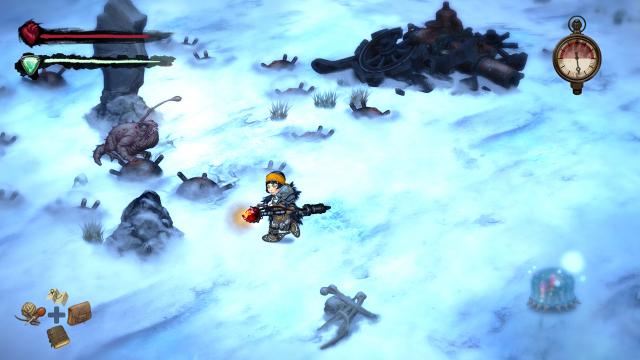 While the game sports a compelling loop and satisfying moment-to-moment gameplay, it struggles in quest design and inventory management — two areas vital to the success of a survival game. Far too many of the game's quests involve Sachi moving from point A to point B, collecting X number of items, and returning to her quest-giver. It gets tedious quickly. Sure, there's a compelling story unfolding in the background, but it can't mask the reality that much of Smoke and Sacrifice is busy work.

Inventory management is another thorny issue. Using the d-pad, players can bring up a quest log, a map, a catalog of recipes, and, finally, an item inventory. The problem with the latter is twofold: there aren't enough slots to contain the game's myriad of supplies and there's no way to organize items by type. Players can "favorite" their most used weapons and items, yes, but they can't sort them into groups, which makes searching for a needed item more laborious than necessary. 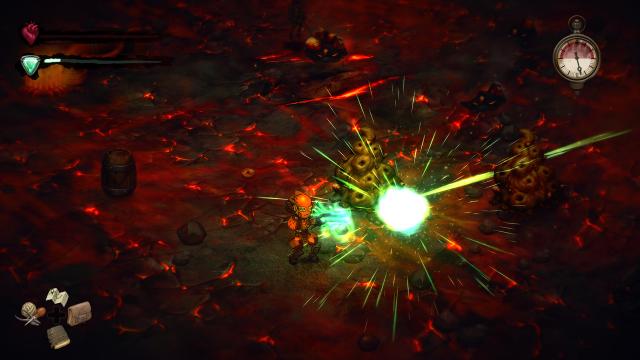 While Smoke and Sacrifice might have some inventory and mission design problems, there's nothing problematic about its art design. The game is stunning, with hand-drawn art that belongs in a museum. The twisted, alien creatures of the underground — alternately steampunk, macabre, and medieval — are endlessly fascinating, and Sachi's armor and weapons sets inspired. Environments, which come in the form of patchwork shanty towns, icy wastelands, and bubbling swamps, are equally ravishing. Alas, the game suffers at times from framerate drops and the odd crash. Remember to save often, dear reader.

Smoke and Sacrifice is a distinctive title, visually, thematically, and mechanically. It accomplishes what it sets out to do — merge a meaningful narrative with survival gameplay — and as a result will be attractive to fans of games like Don't Starve who wished for a little more storytelling. Monotonous quest design, some inconvenient inventory options, and a smattering of technical hitches, however, may keep other gaming enthusiasts at bay.

This review is based on a digital copy of Smoke and Sacrifice for the NS, provided by the publisher.