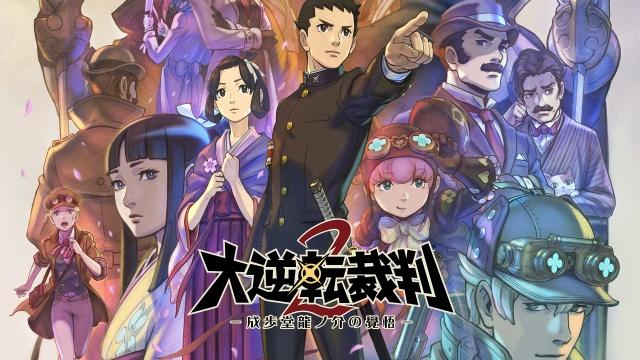 The Great Ace Attorney 2 surprises the player in the very first minutes by suddenly changing the main character. You start out as Ryûtarô, a distant cousin of Ryûnosuke, the official protagonist. Although I'll keep his real identity secret, Ryûtarô's disguise probably won't fool anyone, especially after seeing his feminine behavior. The novice Ryûtarô intends to protect his friend Haori in a risky trial taking place in Imperial Japan in the late 19th century. This first murder case immediately grabs your attention because the victim turns out to be the most mysterious character of the previous entry. The facts are stacked against your client and demonstrations are rather complex for a first chapter. 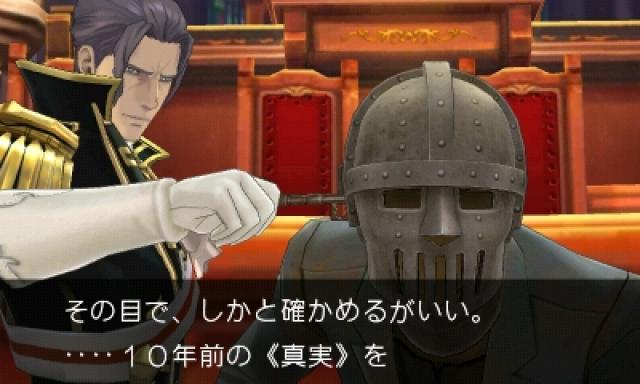 The Great Ace Attorney gave the impression of being an awkward and incomplete episode, but now we know that's because the team at Capcom obviously had the initial intention of telling the whole story in two games. Sure enough, The Great Ace Attorney 2 reveals the missing pieces of the first title over the course of four chapters and gives a clear direction to the Daigyakuten Saipan subseries, as it is known in Japan. The first aspect of that is the reappearance of two characters that we saw only briefly in the previous title. Their role is now fully explained in an entire case that works as a flashback of past events. We discover how Ryûnosuke managed to find a certain artifact (of great importance in explaining the course of events) at the expense of a failed and dishonest actor.

But what comes after is even more exciting, because from chapter three and onwards the story begins to fill in the holes and correct the inconsistencies of the first title. For starters, the game will tell you everything about prosecutor Barlock Von Zieks, including the reason for his hatred of Ryûnosuke. This scenario also casts light on the murders surrounding Von Zieks' cases, uncovers a behind-the-scenes criminal scheme of international scale, and brings back a character that no one was expecting to see.

In terms of plot twists the story certainly delivers. It also cleverly links the present events to a series of horrible murders that took place 10 years earlier. This case gets declassified and darkens the atmosphere of The Great Ace Attorney 2, making it feel like a real thriller. The true identity of the mastermind, called « Professor » is looming over the adventure until the very end, and the musical themes that come with this storyline are terrific. 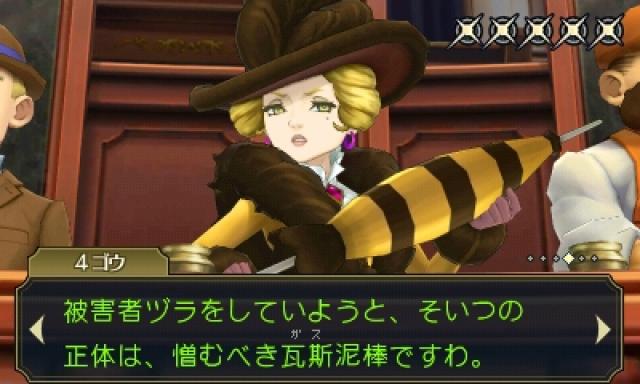 It was obviously not the time for innovation in the series, however. The Great Ace Attorney 2 directly inherits the gameplay of the previous entry, without even trying to implement a little novelty, in contrast to most Ace Attorney games. During trials, your task will therefore still be to spot lies and contradictions in the witnesses' testimony, and prove your point by showing relevant pieces of evidence at the right time. There can be more than one witness at a time, and the jury is still part of the system, but this doesn't fundamentally change the gameplay, which still essentially comes down to 'find the contradictions between the witnesses to progress'.

Classic and unchanged gameplay then, but very efficient in the way that complex cases demand a great deal of thinking. The logic used is quite elaborate and you'll often have to spot little hints in the dialog to deduce important things later on. There is also the usual system of allowing you to inspect an object from every angle using the touchscreen of the 3DS, which is important because here as well you'll need to spot tiny details in order to demonstrate how the crimes took place. Unlike Ace Attorney: Spirit of Justice, however, a game over will send you back directly to the title screen and all help systems have been removed. 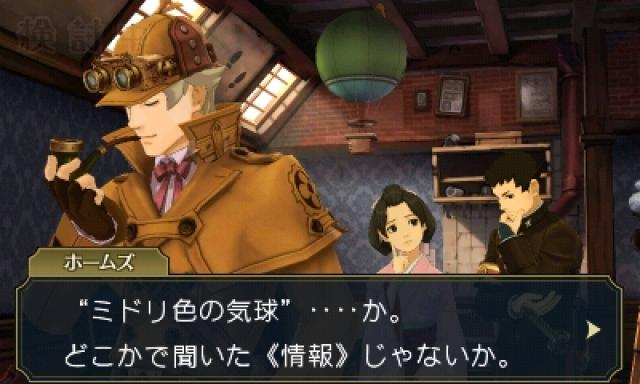 As in the first The Great Ace Attorney, Sherlock Holmes will regularly trigger investigation phases, showing once more how great the graphics of this series are for the system. Very much unlike the hero of the novels, the famous detective keeps making mistakes and suggesting unrealistic theories. It then falls to you to fix his reasoning and find out what really happened at the crime scene. You actually have to turn the camera around and point out the correct elements of the room in order to clear an investigation. These scenes are a lot of fun to watch given the pace at which Sherlock Holmes blunders about, not to mention how brilliantly animated these sequences are. On the other hand, it's less satisfying in terms of gameplay: investigations are not very challenging and get progressively easier as you progress through the story. 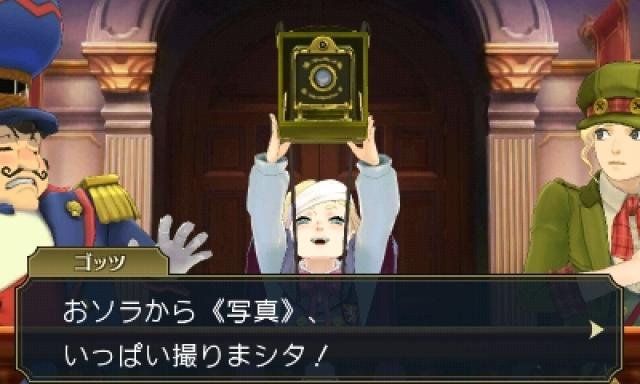 The rest of the game is no less hilarious. The Ace Attorney series has always entertained with its caustic humor, and The Great Ace Attorney 2 is no different thanks to the numerous eccentric characters that show up on the witness stand. One highlight is the remarkable comeback of formidable writer Natsume Sôseki (the novelist has just released the masterpiece I am a Cat and boasts about its success, while starting nonsensical debates like “of Romeo and Juliet, who's the strongest ?”). Other characters make the trial phases a pleasure to work through, cracking multiple jokes and exhibiting unique behavior, like the 10-year-old Prince of Bohemia who threatens to declare war if people don't give in to his whims. But the most impressive part of the writing is the cleverly placed Easter eggs about Arthur Conan Doyle's original novels. For example, anecdotes based on The Red-Headed League and The Man With the Twisted Lip can be found in the last chapter.

Capcom had planned everything from the start. The Great Ace Attorney might have felt disappointing, but it was clearly meant to be the prelude to a greater story; one which finally comes together here in The Great Ace Attorney 2. It features all of the elements that make the series so enjoyable: tricky cases, hilarious characters, splendid music, and unforgettable turnabouts. It finally makes for a spin-off that is, in the end, as great as the main series.

Reviewed based on a Japanese version of the game. The Great Ace Attorney 2 still has not been announced for Western markets.

Where do those screenshots come from?

Miiverse, when it was still alive

This review gave me a split second of hope that this had somehow been localized without me knowing about it.....I'm sad now :(

Erm... the norm is for the AA is to have 4 cases.
Well... i'd love to see it localised but capcom doesn't seem interested by the preposterous reasons presented for not localising the first one. Like Wright can't have ancestors in Japan. It is sooo lore breaking! Nonsense!

The norm is 4. Sometimes theres 5 wich a short introductionary case like in 3 and 5 and great AA, but the stories are always divided in 4 cases. DLC cases tend to be side stories. The 5th case on the first game was only added in the DS version. 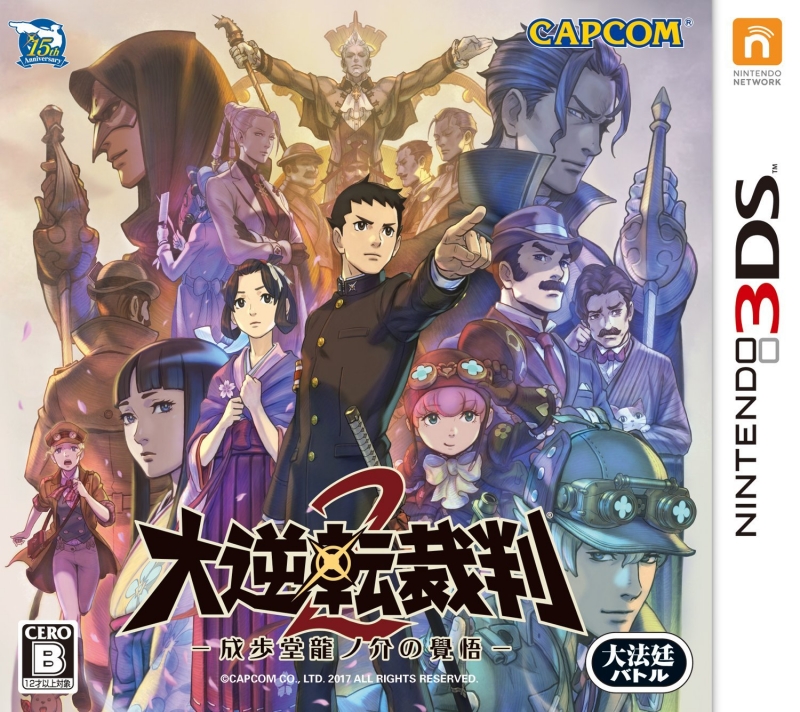