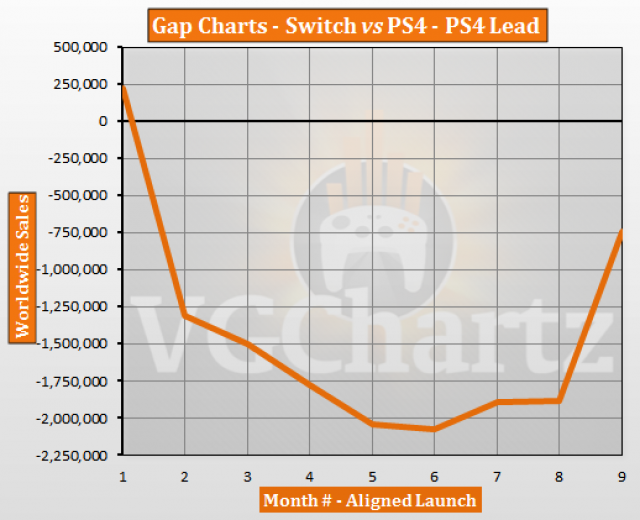 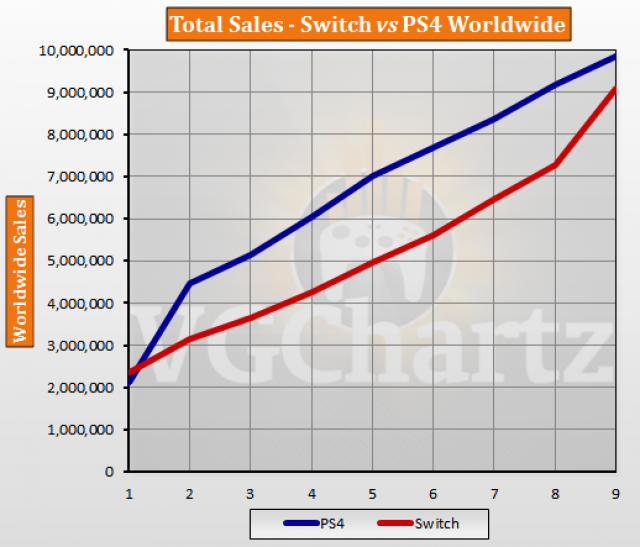 Switch is the PS4's true rival.

The prodigal son has returned, to overthrow the usurper.

The Atari Box hasn't yet been released.

Here's my actual estimate on whether or not Switch can pass PS4 Aligned: maybe. It'd have to do well over 1m units to pass PS4, which is entirely possible considering it's December. But with so much attention on things like Call of Duty and Assassin's Creed, it's still also possible that the Xbox and PS4 can dream enough attention away from Switch for it to not pass PS4 in its last holiday month.

PS4 vs DS comparison next

Switch will take the lead next month. Let's see if it can hold up after Christmas as the PS4 gets September and October.

Covering the 700K in the next month is much more likely than previous indications that it could cover 1.8M in a month where it received no special sale price.

Europe and ROW heavily favours Sony, yes the switch is the fastest selling console in the US and Japan(congrats though) but globally PS4 is ahead by a good margin. Switch should pass PS4 in December/end of the year and then the PS4 should take back the lead in the new year as the PS4 approaches its first full holiday season in all markets.

Europe and ROW heavily favours Sony, yes the switch is the fastest selling console in the US and Japan(congrats though) but globally PS4 is ahead by a good margin. Switch should pass PS4 in December/end of the year and then the PS4 should take back the lead in the new year as the PS4 approaches its first full holiday season in all markets.

Sorry wrong comment, somehow I was trying to reply to dyllyo but it put the comment here, not sure why it double posted too, my bad.

The PS4 did 14.4 mi first year. Do you honestly think switch won't do that by March?

This is going to be very close. Switch won in Japan by huge margin and US by smaller margin. PS4 outsell Switch in Europe and ROW.

Someone gonna be eating crow.

Why? You’re comparing Switch’s holiday months to PS4’s July 2014. Of course the gap is going to decrease dramatically, but give it another 3 months, and PS4 will be shooting right back on top.

@DialgaMarine but PS4 already had its holiday so it's still a fair comparison. In three months PS4 will have its second holiday while switch will only have its first so it's still better. And if in 12 months it sells more there is nothing indicating PS4 will be better since by the time switch gets to its econd holiday it will the PS4 in the dust again especially if Nintendo's estimate of 20mil becomes true or is an understatement

Wait. So how is the Switch the fastest selling console if the PS4 sold more in the same amount of time?

In the US. Those graphs are WW numbers.

Yesterday's article was about the US market, this one is about worldwide sales.

The Switch is now the "fastest selling console on the first 10 months", in US and Japan. But it is far to be the case in Europe.

All you guys are saying the reason is that this is a global chart, but in reality the real reason Switch is not head is because the chart end on November.

Even in USA as for November PS4 was head of Swicth, then Switch surpassed it in December. Same thing will happen Worldwide, the difference is that the gap won't be as huge as it is in the US (almost 1 million difference)

^ This. Switch is the best-selling in 10 months in the USA, this chart is not only worldwide but also 9 months.

In Europe PS4 outsell Switch. Sales in Japan slow due to masive shortage.