With Smash Bros. currently on ice, there's an under-served need on Switch for a party fighting game. Enter Brawlout, which debuted on Steam earlier this year. It won't make fans forget about Nintendo's best-in-class brawler but its customization options and fighting mechanics are broad and deep enough to keep it in regular rotation on Switch — at least until Masahiro Sakurai returns to the drawing board.

Brawlout is a four-player platform/party-fighter with a bunch of colorful creatures and humanoids duking it out in a series of one-on-one and battle royale matches. The point of each match is to survive the longest or to score the highest number of ring-outs. As with Smash Bros., combatants who absorb too much damage are more susceptible to future attacks. Instead of a health bar, each fighter has a percentage value that dictates how far he or she will travel after being struck. Travel too far or too fast from the main stage and you'll lose a life, and your opponent will score a KO. 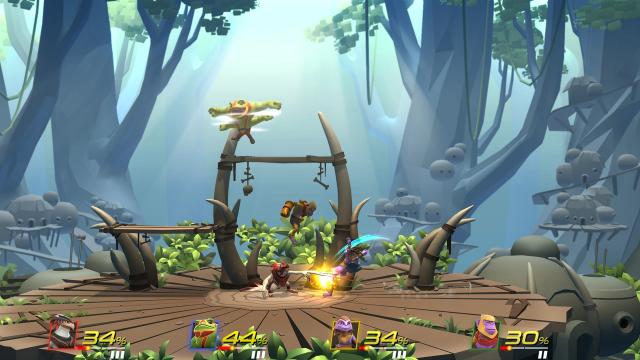 Despite the game's physical and mechanic similarities to Smash Bros., Brawlout actually plays more like traditional 1v1 fighters, such as Street Fighter and Mortal Kombat. Without any block or grab buttons, the game moves at a fast pace, focuses on combos, and rewards aggressive play styles. In Smash Bros., players need to read and anticipate players' moves, reacting to an attack with a block, or a block with a throw. In Brawlout, conversely, players need to focus more on movement and trajectory.

It's a meaningful gameplay shift that serves Brawlout well. It's enhanced and informed by another quirk - the rage meter. It's charged by landing and absorbing attacks. When half full, players can deploy a rage burst, which is essentially a combo breaker. At full strength, you'll go into rage mode. This reduces the knockback you receive and strengthens your own attacks. Knowing when and where to use these two rage moves is instrumental to success. 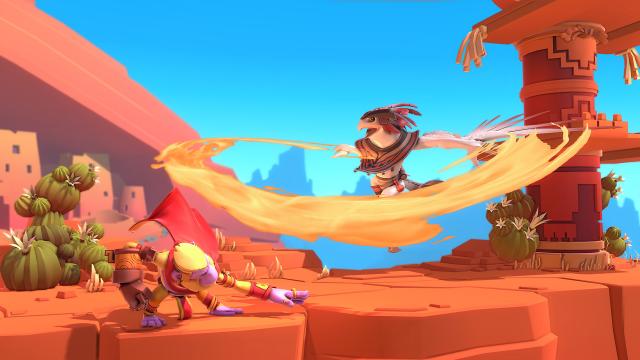 These moves and features are useful both in the game's single-player arcade mode, which features towers of easy, medium, and hard difficulties, and in a suite of offline and online multiplayer options. Up to four players can brawl together in the same room, or enterprising solo artists can venture online for 1v1 matches. While searching for matches online, players can participate in offline matches against bots — a nice little touch. Online lobbies were sparse during the writing of the review, but should become more populous once the game officially launches.

While the game's fighting mechanics are well-balanced and flexible — and, importantly, different enough from Smash Bros. —  and its single-player and multiplayer options substantial, its character roster and stage lists are less impressive.  Brawlout has only eight fighters, although ten more character variants are unlockable. That's an incredibly low number for a mascot brawler like this. 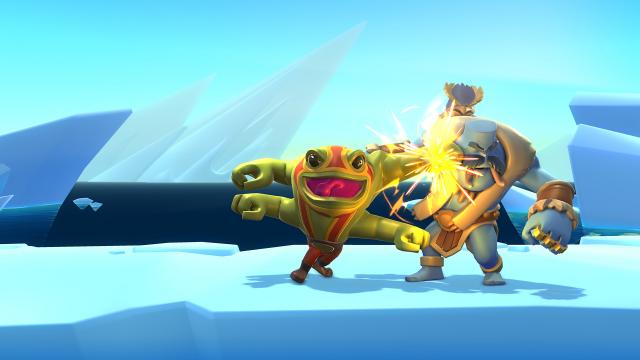 The characters are fun and interesting enough, mind you. Olaf Tyson, a walrus man with a penguin on his shoulder, is like a modern Sub-Zero, with freeze attacks and powerful short-distance melee moves. Paco, a frog-like wrestler, is a short-range fighter with an assortment of throws and suplexes at his disposal. King Apu, a mix of Simon Belmont and Dhalsim, fights with a long chain. The game also features two guest fighters from other indie games: Juan from Guacamelee! and the Drifter from Hyper Light Drifter. Somehow these cameo characters blend in perfectly with other members of the roster, both visually and mechanically. Drifter, part Fox McCloud, part Marth, is especially good.

There are more stages than characters, thankfully, but they're not exactly inspired. While they all have interesting settings and backgrounds, they usually play in a similar way. Most contain a wide flat surface with two or three tiers. Apart from a desert map with crumbling sides, the game doesn't have enough dynamic or interactive stages. Worst of all, all but three stages are locked when you start the game. 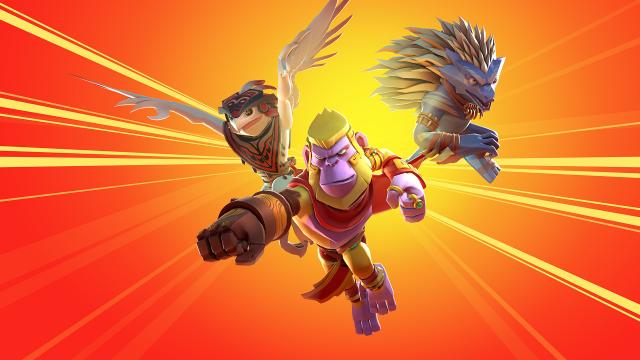 How you unlock these stages, along with character variants, skins, and avatars, is perhaps Brawlout's most confusing and tiresome problem. Eight of the nine locked stages are unlocked by bringing each of the game's eight brawlers to level five. By earning experience points in single-player arcade mode and multiplayer matches, players will bring every character to a higher level, unlocking gems and gold along the way. The problem: getting to level five takes a while, and in the interim you'll be left with three maps to play again and again.

Yet that's not the weirdest way to unlock things. That honor goes to Brawlout's storefront. Here you can use collected gems and gold coins to purchase pinatas, which provide randomized avatars, skins, and fighter variants. It looks and seems like something designed for micro-transactions, right down to the Fortnite-esque pinatas. Yet, the game doesn't allow real-world currency exchange. It's wonderful that Angry Mob Games eschewed micro-transactions, but it's strange that the studio hid most of the game's unlockable content behind a loot box economy. 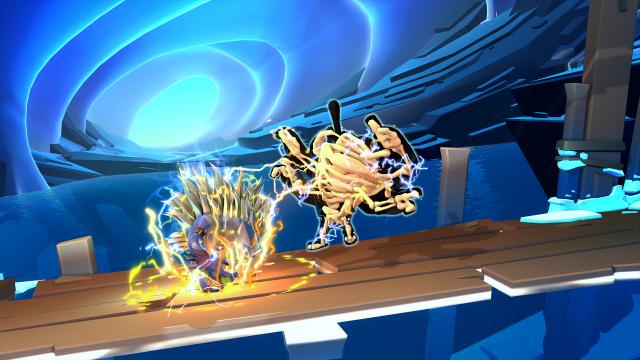 Even with a small character roster, boilerplate stages, and a slow, counter-intuitive progression system, Brawlout is a decent brawler. Its core movement and fighting mechanics, combined with rage burst and rage mode, make it enjoyable and interesting to play. Its fighters, both homegrown and borrowed, are colorful and different enough from one another. It boasts a lot of options, for solo players and for friend groups. Ultimately, it's not a replacement for Smash Bros., but in its absence it's a fine substitute.

This review is based on a digital copy of Brawlout for the NS, provided by the publisher.

Unfortunately, "mascot brawlers" only really work when they have recognizable mascots. That said, I want to try this out to see how Hyper Light Drifter plays.

Would have loved Shantae and Undertale characters in this, among other indie game characters.

I'm very tempted to buy this title since the Switch is still Smash-less. From the review it seems like the core gameplay is solid.

For $20 this is a tempting buy