In an industry increasingly populated by games that make big promises and under-deliver, it's refreshing to find an unassuming title that surprises and impresses. Human: Fall Flat is such a title. It's nothing special to look at. Its controls are wonky and its narrative non-existent. Yet there is something mesmerizing about its unstructured gameplay. It's far from perfect, mind you. Mechanical issues make sure of that. Even so, there are moments of discovery, experimentation, and pure joy in this game that defy its technical limitations.

If you're looking for a good story in Human: Fall Flat, or a story at all, look elsewhere. Players control a blank slate of a human called Bob. He will wobble, jump, and launch himself across nine sandbox "dreams." At the end of each dream level, Bob simply falls out the bottom and lands with a thud on the floor of the next one. 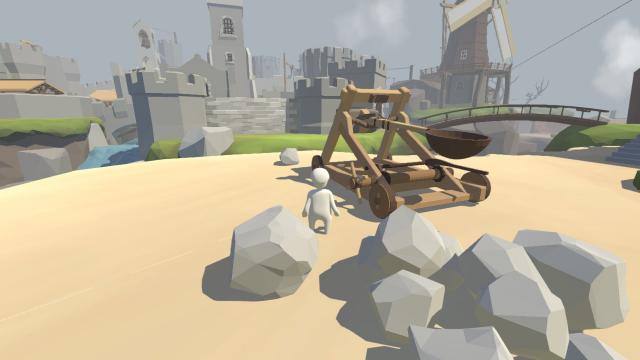 Human: Fall Flat is a physics-based puzzle game. By manipulating objects and taking advantage of the game's realistic physics, players can solve its puzzles and navigate beyond its environmental hazards. For example, Bob can load a rock in a catapult and launch it at a fragile wall, creating a way forward. Or he can insert a pole into the opening between doors, and wedge them open. Outside of the first few levels, which serve to introduce the game's systems and mechanics, Human: Fall Flat gives players a lot of room to experiment. There isn't just one way to get to the end of a level; there are many. Part of the fun is breaking the rules and forging your own path.

Arguably the best level in the game is "Water" which greets players immediately with several boating options. There's a rowboat, a sailboat, and a speedboat. From there the environment opens up with a series of complex puzzles and pathways, each with several solutions. It's the best of Human: Fall Flat, but it's also a reminder of the worst: awkward and fussy controls. 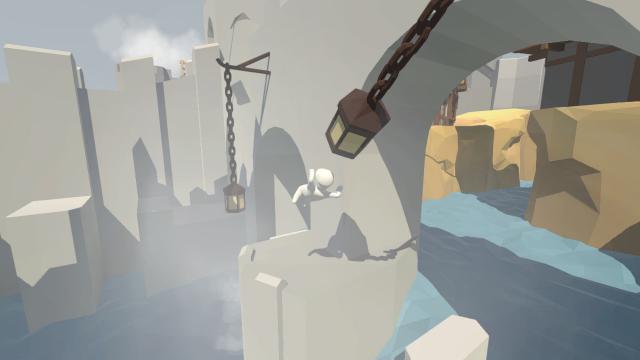 The realistic physics governing in-game interactions extend to Bob's body as well. He moves like a rag doll, with a solid middle section and dangling arms and legs. This is both a blessing and a curse. It's blessed because it works so naturally with the physics-based mechanics of the game. It's cursed because it creates a dynamic where players are often fighting against slippery, imprecise controls. It's unclear whether there's a suitable solution for this problem, though. The game's puzzles, after all, are built around wonky controls. Make Bob a typical video game avatar and you miss the point. Keep him as is, and prepare for moments of frustration. In short, Human: Fall Flat has "bad" controls by design.

Solo players can soften the pain of loose controls by inviting a friend for the ride in local co-op (note that the game requires two standard controllers to work in split-screen co-op). Not only does this make many puzzles more manageable, but it makes the entire experience more hilarious. Witnessing the weird and unpredictable physical reactions in the game with someone else makes them all the more enjoyable. Plus, there are many opportunities for a little "friendly fire." Dropping a barrel on a friend or pushing him or her off the map into the abyss never, ever gets old. Don't worry, though; players who fall of a ledge circle back and return to terra firma shortly after. 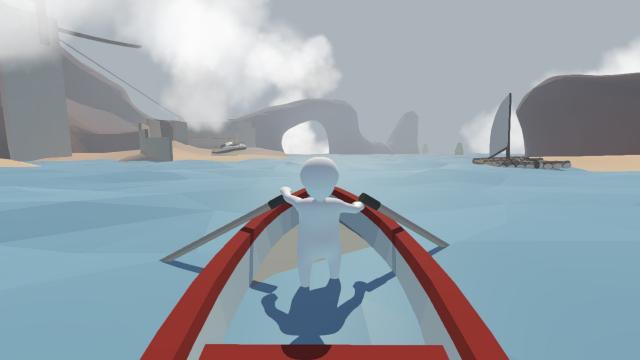 As fun and comedic as Human: Fall Flat can be, it's missing a few features that could make it even better. Local multiplayer is fun, but online multiplayer would help round out the package. So too would collectibles, which are strangely missing from the game. Physical trinkets and easter eggs would be most welcome, especially with many hard-to-reach locations scattered across the dreamscape. Finally, if ever a game needed a level editor it's Human: Fall Flat. Yet, there is none to be found.

Some missed opportunities aside, Human: Fall Flat is a funny, rewarding game that delivers more than expected — a rarity in the modern gaming landscape. Bring your creativity, your imagination, and a friend if you can. Then prepare yourself for a lot of fun, a lot of freedom, and, due to some wobbly controls, a fair dose of frustration.

This review is based on a digital copy of Human: Fall Flat for the NS, provided by the publisher.

I had no expectations for this. Color me surprised.

How well are some of these games doing sales wise?