Channelling games like Joe & Mac and Metal Slug, Caveman Warriors is a throwback 2D action-platformer. Like so many crowd-sourced indie games it wears these inspirations on its sleeve, using older fan-favorite titles to both explain and promote itself. Truly, a lot has gone into the melting pot that is Caveman Warriors: in addition to the aforementioned games, it emulates New Super Mario, Castle Crashers, and Trine. Unfortunately, it's never as fun or as memorable as the greats that came before it.

The story in Caveman Warriors is short and sweet. An alien spaceship lands on prehistoric Earth and abducts two troglodyte children (think Pebbles and Bamm-Bamm). The rest of the family attempts to chase down the alien abductor, which brings the cave-dwelling clan face-to-face with warring neanderthals, dive-bombing pterodactyls, and, much later, alien technology and WWII tanks. 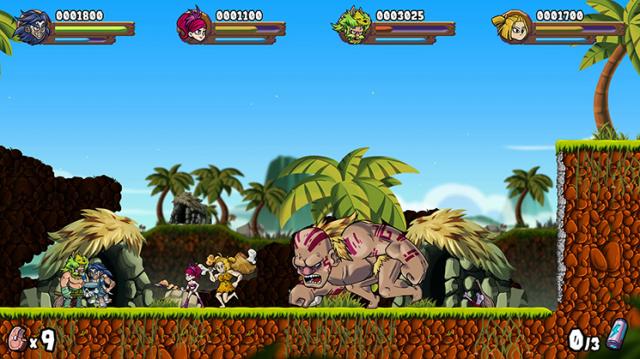 All of the game's story moments are told in entertaining comic strip panels after each level. It's a creative and cost-effective way to communicate a plot line to the audience — a method some other studios would be wise to adopt. Not every title requires professional voice actors, expensive motion-capture technology, and hours of cinematic cut-scenes to tell a story; sometimes all you need is an amusing set of images to inform a player what is happening and why it matters.

The four heroes of Caveman Warriors are Jack, Liliana, Moe, and Brienne. All four can be utilized in four-player local co-op play, or controlled by a single player alone. Here the Trine connection becomes evident. Solo players can swap between all four cavemen and women with the press of a button, bringing the individual talents of each character to bear. 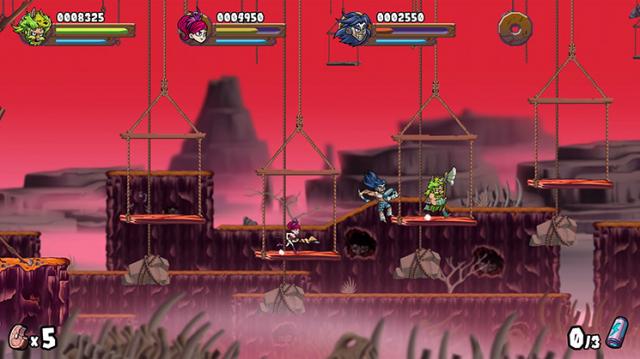 Like Zoya, Amadeus, and Pontius in Trine, the protagonists of Caveman Warriors have some unique skill or gift. Jack has an "Unstoppable Onslaught" move that plows through enemies and rocks alike; Liliana's "SpearHead" attack allows her to throw a spear into a wall to create a foothold; Moe boasts a special called "Monkey Song" that spellbinds enemies; and Brienne carries a large meatstick that functions as a shield.

It's a great idea in theory, but less than successful in practice. There just aren't enough opportunities across the game's eight levels for character-swapping. Yes, there are moments where Moe's monkey decoy or Jack's rampage move are necessary to move forward, but they are few and far between. Worse, there's a glaring imbalance among the four heroes. One could easily rush through the game playing as Liliana or Brienne 90 percent of the time, pausing only briefly to try Moe or Jack. With four players along for the ride, this imbalance is exaggerated, as some characters are simply less useful and less fun than others (Moe is especially useless). 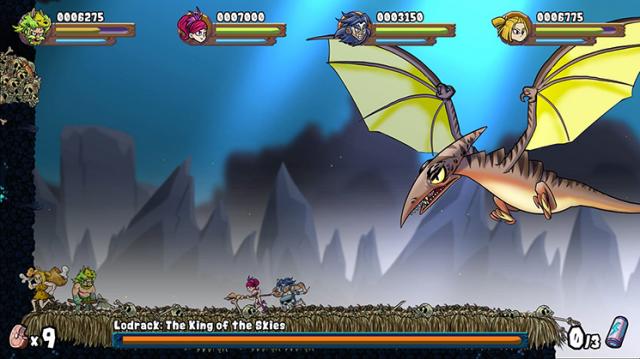 Without many openings for platform-based puzzle solving, Caveman Warriors needs to rely on the strength of its combat — with regular monsters and boss creatures — and level design. Fighting the game's rank-and-file is fine but run-of-the-mill. Boss battles, however, are a cut above. These are challenging, thoughtful affairs that range from man-eating plants to cyborgs (legally distinct from the Terminator). Unfortunately, all fights in the game suffer from narrow hitboxes that make connecting with enemies something of a coin flip.

Level design is also a mixed bag. While many of the maps are thematically different, they have similar layouts and physical challenges. New mechanics and obstacles are introduced here and there, but never really build to anything. There's no feeling that the last level is a final exam based on all the lessons learned over the previous seven chapters. 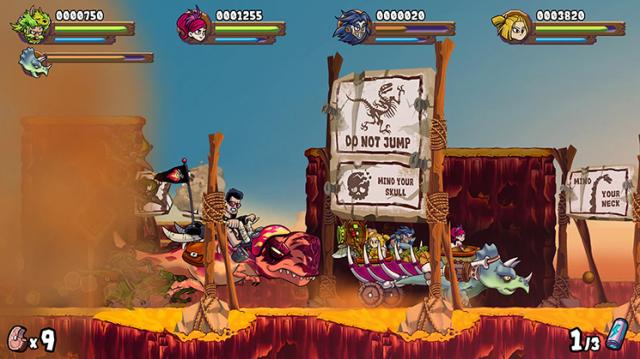 Bright spots exist, though. There are two vehicle levels that add spice to the game, and a bunch of hidden batteries tucked away in awkward-to-reach or hard-to-find spots. Find enough and you'll unlock harder variants for each of the eight levels. These secret levels, along with a more difficult "arcade" mode unlocked upon completing the main game, bestow some much-needed replay value to a title that could be bested in a single sitting.

A single sitting may be insufficient, however, if you're unable to connect with Caveman Warrior's decidedly old-school level of difficulty. Although the game's learning curve is pretty much perfect — ratcheting up its challenges at even increments across eight levels — it has a few design oddities that make it a little more daunting than it needs to be. These include checkpoints spaced unevenly and unhelpfully; enemy knockback effects that will summon every Ninja Gaiden and Castlevania rage-quit you had as a kid; and enemies and hazards placed between the stage's final checkpoint and boss, creating instances where you and your squad arrive at the climactic showdown with less than full health. There's also a stamina bar, which seems out of place for an old-fashioned action-platformer like this. 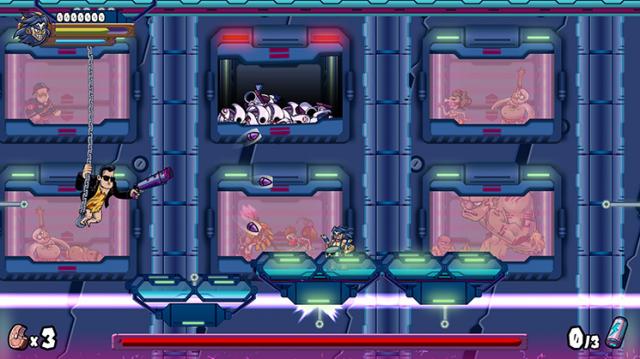 Caveman Warriors is a loving homage to some of the classics of yesteryear. Yet for all its borrowed ideas and mechanics it never emerges from the long shadow cast by those games. Ultimately, it's a grab bag of gameplay conceits never fully fleshed out. There are high points — boss battles and secret levels among them — but not enough to elevate it above others in the genre.

This review is based on a digital copy of Caveman Warriors for the NS, provided by the publisher.

Actually has some fun looking visuals.