Based on the Battle Chasers comic book series, written by Joe Madureira, Battle Chasers: Nightwar is a turn-based RPG with randomized dungeons set in an arcanepunk setting. It starts off strongly, offering up a terrific battle system and some top-tier art and animations. Around the fourth dungeon, however, things begin to unravel. The game's difficulty spikes dramatically, its party management system proves unwieldly, and the necessity for grinding becomes evident.

Nightwar takes place in the Battle Chasers sword-and-sorcery setting. A party of heroes, flying over an island in an airship, is shot down by pirates. As the group attempts to find its missing members, they stumble upon an evil plot. Along the way we meet Gully, a young girl who's inherited her father's powerful gauntlets; Garrison, a no-nonsense warrior; and a few other colorful cast mates. The characters in Nightwar never really transcend the standard archetypes of the genre, but they're good enough. The war golem Calibretto, though, is a stand-out. He is, ironically — given his immense size and strength — the healer of the group, and overprotective of Gully. 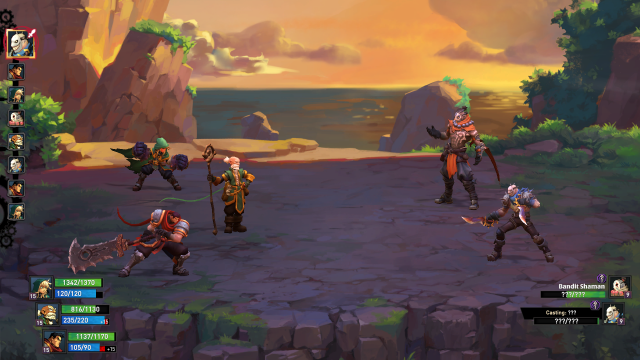 Although the characters and storylines of Nightwar operate according to standard fantasy tropes, its artwork and animations are extraordinary — no surprise from Maduereira, who illustrated Uncanny X-Men in the 90s and served as creative director on Darksiders. The heroes, villains, and NPCs of Nightwar are drawn beautifully, either in 2D art or 3D models. They look even better in action. Every move and gesture in battle is rendered in vibrant color and fine detail.

Layered underneath all this handsome artwork are a lot of interesting role-playing mechanics. Nightwar is divided into three main gameplay experiences: overworld map exploration, dungeon diving, and turn-based combat. 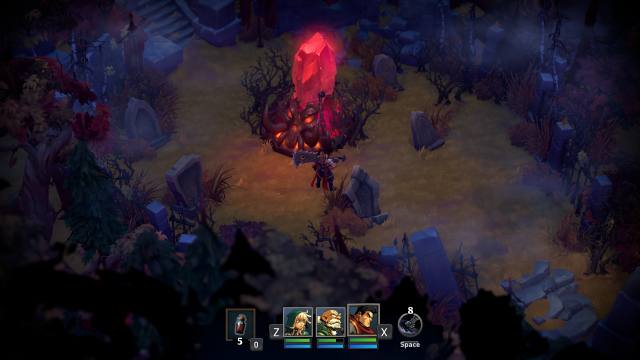 On the game map, players will move the party along nodes. Nightwar doesn't allow free roam across its landscape, so players will need to stick to pre-determined paths, which are dotted with enemy encounters, treasure chests, fast-travel portals, "exploration areas," and dungeons. Entering a dungeon or an exploration area will shift the camera to an isometric point of view, and give the party greater freedom of movement. Here the heroes of Battle Chasers can solve puzzles, fight monsters, and, in the case of dungeons, face a boss.

While these dungeon dives might look and feel similar to an action-RPG like Diablo or Baldur's Gate, they actually have more in common with something like Chrono Trigger, as running in to a monster in a dungeon will activate a turn-based battle, albeit on a separate battle screen. It's here where Nightwar shines brightest. Its battle mechanics are a smart blend of traditional turn-based rules and a few fresh ideas, courtesy of developer Airship Syndicate. 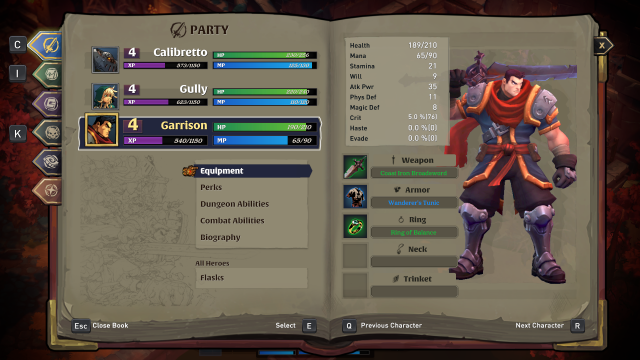 The most refreshing idea is "overcharge," in which basic attacks grant an extra pool of mana. By deploying non-magical attacks, each hero will earn 5, 10, or 15 points of additional mana that can only be used in that battle. This allows players to use their characters' powerful attacks without dipping in to their mana reserves, and prevents the need to hoard mana until the final boss battle. It's an ingenious answer to a common RPG problem.

Nightwar is refreshingly new-school in several other ways, including auto-saves and the freedom to bypass skirmishes with lower-level enemies. Perhaps that's why its achingly archaic party management system is so frustrating. As more members are added to the party — first the wizard Knolan; then the rogue Red Monika; then, finally, newcomer Alumon — the game starts to show cracks in its facade. Where most of the game adopts modern conveniences such as auto-save, Nightwar makes the mind-boggling decision to allow only members present in the party to level up. Anyone left in the wings can't receive experience points, and soon enough they're too many levels behind to help at all. 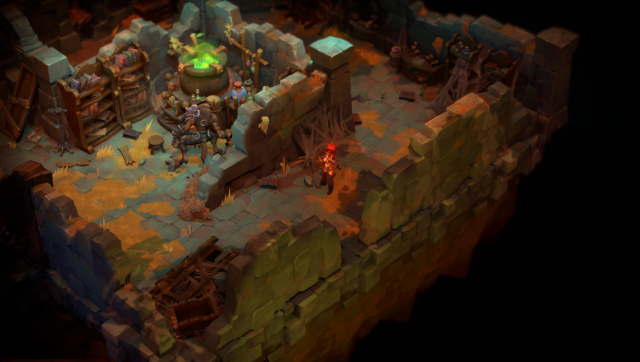 It's particularly aggravating because all the characters in Nightwar have unique and interesting attacks, buffs, and spells. You will want to use them all. Yet the game's inflexibility in terms of party management means players will need to settle on a party and stick with it for the remainder of the game. Furthermore, you'll only be able to switch party members at the entrance to a dungeon or at the game's sole inn. Out in the field, the party is locked in.

This isn't the most daunting part of Nightwar, though. Once Red Monika appears, around the end of dungeon three (there are eight in total), the game's difficulty level shoots in to the stratosphere. Players will soon discover that in order to move forward in the game, they'll need to move backward, literally, toward previously-completed dungeons. Only by replaying dungeons on harder difficulty settings can party members gain the experience needed to approach the next one. This stops the game in its tracks. 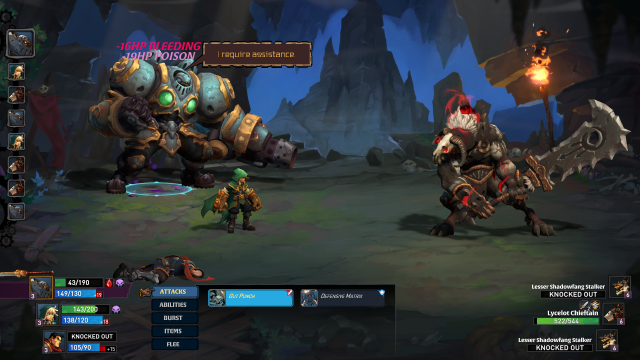 Aggravating these party management and grinding problems are a few technical issues, including crashes (at least on PS4) and long loading times. Crashes come infrequently and are mitigated by auto-save, but are still unwelcome and inexcusable.

One thing that Nightwar manages to do exceedingly well, in addition to its stellar combat systems, is reward its players. Throughout the game, Nightwar consistently provides feedback and rewards to players. By collecting journals in dungeons, fulfilling contracts with the Beast Master in town, trading in fish to the Fish Monger, or even by slaying a certain number of the same monster, players will earn materials, spell books, attribute bonuses, and rare equipment. Almost everything you do in Nightwar has a corresponding reward. 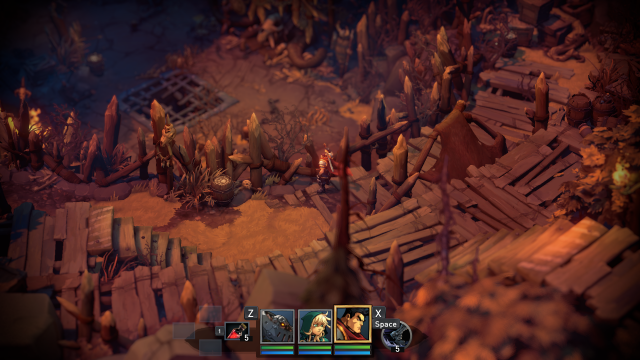 There's a great RPG in Nightwar, somewhere. The battle system is unimpeachable, the animations gorgeous, the opportunities for exploration numerous, and the reward system gratifying. All of this is marred, however, by dramatic difficulty spikes, rigid party management, tedious grinding, and some technical problems. Overall, this is an admirable first attempt from Airship Syndicate, but one with a lot of unrealized potential.

This review is based on a digital copy of Battle Chasers: Nightwar for the PS4, provided by the publisher.